This article explains why a resistor-capacitor snubber is needed for power switches and provides practical tips for an optimal snubber design.


The power switches are the heart of every power converter. Their operation will directly determine the reliability and efficiency of the product. To enhance the performance of the switching circuit of power converters, snubbers are placed across the power switches to suppress voltage spikes and damp the ringing caused by circuit inductance when a switch opens. Proper design of the snubber can result in higher reliability, higher efficiency and lower EMI. Among many different kinds of snubbers, the resistor-capacitor (RC) snubber is the most popular snubber circuit. This article explains why a snubber is needed for power switches. Some practical tips for an optimum snubber design are provided as well.

There are many different topologies used in power converters, motor drivers and lamp ballasts. Figure 1 shows four basic power switching circuits. Within all of these four fundamental circuits, and in most power switching circuits, the same switch-diode-inductor network is shown within the blue lines. The behavior of this network is the same in all these circuits. Therefore, a simplified circuit as shown in Figure 2 can be used for the switching performance analysis for the power switches during a switching transient. Since the current in the inductor almost does not change during a switchifng transient, the inductor is replaced with a current source as shown in the figure. The ideal voltage and current-switching waveform of the circuit is also shown in Figure 2. 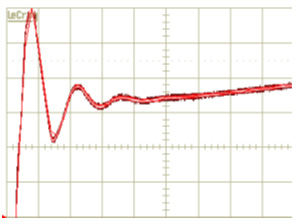 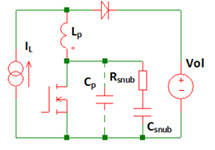 Where power dissipation is not critical, there is a quick design approach for the RC snubber. Empirically, choose the snubber capacitor Csnub equal to twice the sum of the switch output capacitance and the estimated mounting capacitance. The snubber resistor Rsnub is selected so that

. The power dissipation on Rsnub at a given switching frequency (fs) can be estimated as:

When this simple and empirical design does not limit the peak voltage sufficiently, then the optimizing procedure will be applied.

Once the parasitic inductance Lp and parasitic capacitance Cp are figured out, the snubber resistor Rsnub and capacitor Csnub can be chosen based on following calculation.

The snubber resistor can be fine-turned further to reduce the ringing if it is found to be insufficient.

Using all of the calculated values, the design for the power supply switch snubber is complete and can be implemented in the application.