The number of verified reported incidents of counterfeit parts in the electronics supply chain has increased dramatically since 2009. 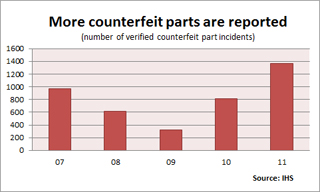 Counterfeit parts often are cheap substitutes or salvaged waste components that fail to meet strict military and aerospace specifications. Fake parts can cause systems to fail and put lives in danger.

While the issue of counterfeit parts is not new, it continues to pose a major problem for electronics manufacturers, especially military and aerospace companies, according to Rory King, director, supply chain product marketing at IHS. “The problem has grown increasingly hard to ignore, as reports of counterfeits have risen exponentially and most companies lack the awareness and capability to effectively detect and mitigate the growing problem,” he said.

The law requires all tiers of the supply chain put counterfeit risk mitigation procedures in place and certain steps must be completed within 270 days of the president’s signature, which occurred on Dec. 31, 2011.

For example, the U.S. Missile Defense Agency learned that mission computers for Terminal High Altitude Area Defense (THAAD) missiles contained suspect counterfeit devices that could have led to an entire system failure. The cost to fix those systems was nearly $2.7 million.

The new regulations also require that qualification procedures and processes be established and only trusted suppliers be used. Electronics must be purchased only from authorized suppliers.