White LEDs, emitting a combination of blue light from an LED and predominantly yellow light from a phosphor, are an established technology at the heart of many lighting fixtures.


White LEDs, emitting a combination of blue light from an LED and predominantly yellow light from a phosphor, are an established technology at the heart of many lighting fixtures. When several LEDs are grouped in a single fixture, white solid-state lights can produce sufficient illumination to rival incandescent bulbs, while operating far more efficiently and lasting much longer.

However, in the continued drive for greater efficacy white LEDs present a stumbling block. The phosphor is so close to the die that some of the photons emitted by the material head straight back into the LED and are absorbed, significantly lowering potential luminosity.

This article describes the discovery and commercialization of an alternative technology that addresses this problem. Called “remote phosphor,” the technology is now available to designers who are looking to improve the efficacy of their products, while benefitting from the advantages of a material that can be injection molded into many shapes to improve the aesthetics of lighting.

LEDs are still a young technology, but one that is maturing quickly. In the lighting sector, for example, analyst DisplaySearch notes that while LED penetration was limited to just 1.4 percent in 2010, it is set to expand to 9.6 percent by 2014.¹

This rapid increase in market share is in part due to falling prices and, in part, due to improving efficacy. This means that fewer, less-expensive LEDs are required per fixture to generate the same luminosity as the devices of several years ago (or the same number can produce a much brighter light for the same power input).

The latest generation of OSRAM OSLON SSLs, for example, claims to be 25 percent more efficient than the previous generation and boasts an efficacy of 116 lm/W at 350 mA.

However, getting to this point has been no easy task. The major LED companies have invested hundreds of millions of dollars on R&D to improve the efficacy of their chips (see the TechZone article “LED Efficacy Improvement Shows No Sign of Slowing”). White LEDs in particular have been the focus of a lot of this expenditure because they offer a straightforward alternative to traditional light sources such as incandescent, halogen, and fluorescent bulbs.

That being said, there is no such thing as an LED that directly emits white light. Instead, light is either produced by combining the rays from red, green, and blue chips such that the combination appears white to the eye, or, more commonly in lighting applications, by using the output from a blue LED and then Stokes-shifting the light using a phosphor comprising yttrium aluminum garnet (YAG) doped with the rare earth element cerium. This phosphor absorbs some of the blue light from the LED and then re-emits it across a broad range of wavelengths comprising some green and red, and a lot of yellow (see the TechZone article “Whiter, Brighter LEDs”). The combination of blue from the LED and yellow from the phosphor appears white.

The most common manufacturing technique to produce white LEDs is to homogeneously suspend the phosphor powder in an encapsulating epoxy that is then used to coat the die. Cree’s popular XLamp XT-E white LEDs are manufactured in this way (Figure 1). 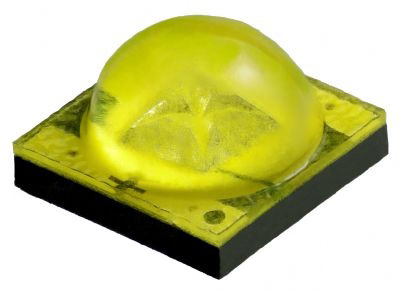 Figure 1: In many white LEDs, the phosphor powder is suspended in an encapsulating epoxy covering the die. (Courtesy of Cree.)

Researchers from Rensselaer Polytechnic Institute in the U.S. conducted a major study to find out exactly what happens to the phosphor and epoxy in a white LED with a view to increasing both the efficacy and longevity of the chips. (The lifetime of LEDs is typically measured as the time it takes the device to fall to 70 percent of its luminosity when new (see the TechZone article “Determining LED Rated Life: A Tricky Challenge.”)

The researchers first noted that blue LEDs covered with epoxy containing no phosphor benefited from longer life than equivalent power white devices. The only difference between each family was the YAG phosphor used to convert the blue light in the white LEDs. The phosphor itself is a very stable material, so the researchers discounted it as the source of the degradation. Instead, they used a ray-path analysis to conclude that some portion of the light emitted by the phosphor, along with the unconverted short-wavelength (blue) light from the LED, circulated between the epoxy and the reflector in the assembly, causing the epoxy to degrade. Worse yet, the region where the light circulated was at a relatively high temperature due to it lying close to the LED’s junction, further increasing the yellowing of the epoxy and lowering luminosity. 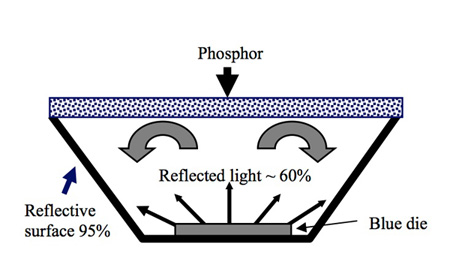 Figure 2: Remote phosphor alone may only improve efficacy marginally because light from the phosphor can remain trapped in the package. (Courtesy of Rensselaer Polytechnic Institute.)

A significant improvement in efficacy was achieved by removing the reflective surface, replacing it with transmissive optics so that the back-scattered photons could escape from the sides of the device and contribute to luminosity. In the modified device, the phosphor is positioned in a layer at the top of the device and the die is reshaped to make it easier for reflected photons to escape (Figure 3).

Major LED manufacturer Cree has also performed tests to compare the output of conventional white LEDs with remote phosphor types. The tests were performed using devices from the company’s XLamp XT-E product range. Cree’s white LEDs are manufactured using exactly the same manufacturing process as its blue chips — emitting light of the same wavelength and radiant flux power — but are coated with phosphor in an additional process step.

For the tests, the company used two sets of 3-by-3 LED arrays. One set comprised the white LEDs, the other blue LEDs covered by a remotely positioned disc employing the same phosphor used in the white LEDs. The arrays were mounted and driven at 700 mA for a nominal output of about 1,400 lm and left to stabilize for about 30 minutes.

The output from the white LEDs was measured as 1,146 lm while the blue LEDs and the remote phosphor disc produced 1,324 lm — an improvement of about 15.5 percent. This figure is lower than that claimed by Rensselaer Polytechnic, which could be due to the fact that Cree’s experimental devices did not include the academic institute’s modified transmissive optics geometry.

In addition to this experimental work, Cree is helping to stimulate the remote phosphor market by promoting its royal blue X-Lamp XT-E LED together with a remote phosphor patent licensing program. For technical reasons, the efficacy (lm/W) for royal blue LEDs is not specified; rather, efficiency in terms of radiometric units is the preferred parameter for product comparisons. The royal blue XT-E LEDs yield 501 mW/W of flux at 350 mA drive current and 85°C operating temperature

Intematix, a U.S.-based maker of LED phosphors, has built on Rensselaer Polytechnic Institute’s developments with its ChromaLit technology. This product uses a remote-phosphor approach to produce what the company says is up to 30 percent higher system efficacy than comparable white LED systems.

For its ChromaLit product, Intematix places a phosphor composite onto a separate substrate that emits white light when excited by a blue LED energy source (the company does not make its own LEDs).

In an interview with Scientific American,³ the company’s CEO, Mark Swoboda, claimed that by separating the energy source from the light-generating phosphor, ChromaLit enables lighting system manufacturers to maintain stable phosphor performance over a lighting fixture’s lifetime.

Swoboda says that another advantage is that manufacturers have more design flexibility because the company’s phosphors are turned from powder into pellets that can be injection-molded into different shapes or into inks that can be used to color plastic disks that cover the blue light source. Figure 4 shows one arrangement for a fixture using blue LEDs, a mixing chamber, a ChromaLit disc, and some optics. 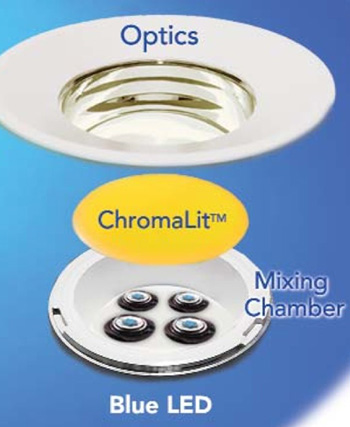 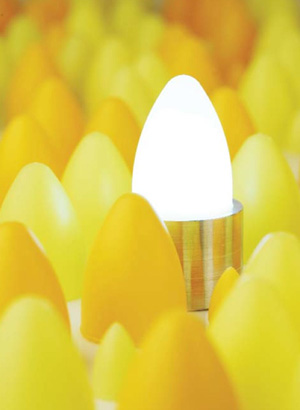 Figure 5: ChromaLit phosphor light sources are available for many applications.

A path to cost savings

White LEDs are an established technology and, despite Rensselaer Polytechnic Institute’s findings that mixing the phosphor with epoxy and then directly covering the die lowers efficacy and shortens life, contemporary devices boast efficacies of 100 lm/W or better and lifetimes greater than 50,000 hours.

Some engineers suggest that the 15 to 20 percent efficacy increase a lighting fixture gains from replacing the white LEDs with blue devices and a remote phosphor disc could just as easily be achieved by adding proven technology in the form of, for example, two more white LEDs to an eight-LED light engine and saving the cost of the disc.

However, while adding more white LEDs undoubtedly will increase luminosity, they will do nothing for efficacy. In addition, the extra devices multiply the thermal and electrical load, which may necessitate more robust (and hence more expensive) driver electronics and heatsink.

Moreover, the extra cost of the remote phosphor disc for the alternative system is negated to a degree by eliminating the requirement for the diffuser typically used in conventional white LED fixtures. Further, blue LEDs are typically less expensive than white devices because they do not use any phosphor and or require such stringent binning requirements (see theTechZone article “Decoding LED Bin Labels”).

Remote phosphor technology does offer a path to cost savings for a fixture with a fixed luminosity specification. Because of the 15-to-20 percent efficacy increase promised by the technology, a fixture manufacturer could replace the white LED light engine with a blue LED version, comprising fewer chips but still assured of the same luminosity. By using fewer chips, the heat of the fixture is reduced, allowing the use of a smaller (and cheaper) heatsink.

There is one potential aesthetic downside to a fixture that exposes the remote phosphor disk to the consumer (again, see Figure 5) and that is its yellow color. Many consumers prefer the white color of a conventional LED fixture’s white diffuser.

White LEDs fabricated using blue dice coated with phosphor have proved to be a useful technology with efficacies of 100 lm/W and greater and lifetimes of 50,000 hours plus. But like every element of LED technology, the drive for greater efficacy prompts scientists and engineers to question the current way of doing things.

Research by Rensselaer Polytechnic Institute has revealed that moving the phosphor away from the die is one way to gain an improvement in efficacy. Now there are commercial solutions available to put the concept into practice in the form of remote phosphor discs. These discs — allied to a new generation of royal blue LEDs — allow designers to create brighter lighting fixtures or reduce the cost of ownership of existing fixtures by reducing the number of LEDs required to maintain a specific luminosity.

As yet, no LED vendors have combined remote phosphor, royal blue LEDs, and transmissive optics in a single package, as proposed by Rensselaer Polytechnic Institute to push the efficacy envelope. But it is surely only a matter of time before that happens — an event that will likely push remote phosphor into the lighting mainstream.