An outline of the soldering process. Which substrates are best for which applications, type of flux to use, soldering methods, and more are discussed.

A substrate is a material which constitutes a printed circuit board, commonly called a PCB. 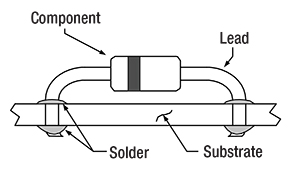 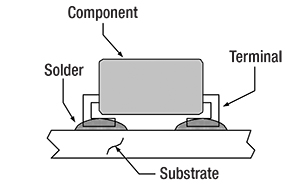 There are many different types of PCB substrate materials. Among the most common are the following:

To select the most appropriate substrate material for the application, the designer of the circuit assembly must weigh these five factors:

It is important to use proper layout patterns in order to ensure good solder connections, especially for surface-mount components soldered by a reflow process. Many surface-mount components have more than three terminals which form the “footprint” for the devices. Ideally, every terminal of the device would be formed to create a perfect mounting plane. In the real world, there is a tolerance associated with how close each lead comes to meeting the intended plane. A measure of this characteristic is called coplanarity. In most cases, some of the terminals of a device will not be perfectly aligned with the intended mounting plane. In an infrared reflow solder process, the PCB pads are coated with a solder paste (Figure 3). When the assembly is heated in an oven, the solder paste warms and reflows. As the solder paste liquefies, it forms an apex at the center of the PCB pad. This apex must contact the terminal of the device in order to make contact. When using an IR reflow process, the solder process engineer must take into account the pad layout and the coplanarity of the devices when determining the solder paste thickness. Figure 4 shows a failure mode where the device has poor coplanarity and the solder paste thickness is insufficient for the apex of the liquefied solder to contact the poorly formed terminal. 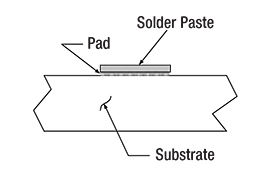 Figure 3: PCB with solder paste before component insertion and reflow. 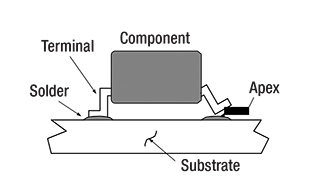 Care must also be taken not to use too much solder paste. Excessive solder paste will result in too much solder on the pad. The terminals of many surface-mount components are designed to flex, which allows the terminals of the component to withstand mechanical and thermal stress without fracturing. When excessive solder is applied, the terminals become captivated within the solder and force is transferred away from the terminals and into the internal structure of the device. This can lead to immediate or latent failures. Figure 5 shows a solder connection with the proper amount of solder and Figure 6 shows excessive solder. 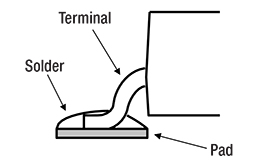 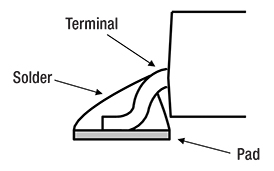 Another major consideration in soldering is fluxing. Flux, used in conjunction with solder during the soldering process, is the material that aids the solder in flowing. The selection of the proper flux and its correct application are essential to proper soldering. Fluxes have differing levels of activity, or abilities to remove contaminants from the device terminals and PCB pads.

A key characteristic of fluxes is their solubility. The solubility of the flux determines which wash processes can be used to remove the flux. In the past, many circuit assembly facilities used active, non-water soluble fluxes. Active fluxes are able to remove surface oxides from the leads or terminals of the devices and result in even, smooth solder joints with excellent wettability. However, active fluxes are highly corrosive. When active fluxes are not completely removed, the solder joints are more likely to corrode and the long-term reliability of the assembly may be degraded. Active fluxes must be removed from the PCB. The removal process is called cleaning or washing. Many materials which are highly effective at removing flux (such as freon and trichloroethane) became subject to environmental legislation several years ago, and they are now illegal in environmentally-conscious countries. As a result of these concerns, the following two trends have emerged:

1. Some circuit assemblers have migrated to low activity fluxes. Fluxes are available now which have such low activity levels that it is not necessary to remove them from the PCB. Such fluxes are commonly referred to as “no-wash” “leave-on” fluxes. However, low activity fluxes frequently lead to wettability problems. Wettability is a measure of how well the solder joins the device lead or terminal to the PC board (Figure 7). Two important factors in a low-activity flux process are the cleanliness of the device leads or terminals, and the plating thickness of the leads or terminals. If the terminals of a device are not sufficiently clean, de-wetting can occur. If the plating thickness of the device terminals is insufficient, non-wetting can occur. 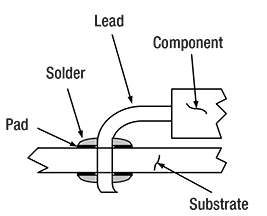 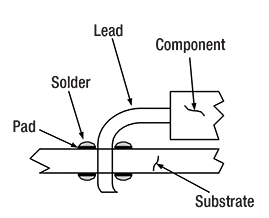 2. Due to the aforementioned concerns pertaining to low activity fluxes, the electronics industry has developed highly active fluxes which are water soluble. These new types of fluxes offer the effectiveness of a highly active flux in conjunction with water-solubility for ease of cleaning.

The leads or terminals of components usually consist of either copper, a copper alloy, or other alloys such as dumet. The leads are plated with one or more other metals. Three common plating materials are tin, lead, and silver. The composition of the plating material directly affects the solderability of the device. When an alloy is used for plating, the temperature at which it transitions from its solid to liquid state is called the eutectic temperature. Many axial-leaded components are plated with either 100% Tin (Sn), or 90% Tin (Sn)/10% Lead (Pb). The melting point of 100% Tin is approximately 232°C, and 90 Sn/10 Pb has a eutectic temperature of approximately 216°C. Many surface-mount components are plated with an alloy of 60% Tin, 40% Lead (Pb), which is eutectic at approximately 190°C. The eutectic temperature of the plating alloy determines the minimum limit of the soldering process temperature in order to reflow the plating on the device’s leads or terminals.

The body composition of the devices is also pertinent to the soldering process. The body material of many components consists of plastic epoxies, which can be grouped into two main categories:

There are four process stages in soldering:

Diodes Incorporated presents the following general thermal profiles for soldering processes (Figures 9 and 10) as examples only. The solder process engineer should always optimize the thermal profile for each circuit assembly based on its specific requirements. 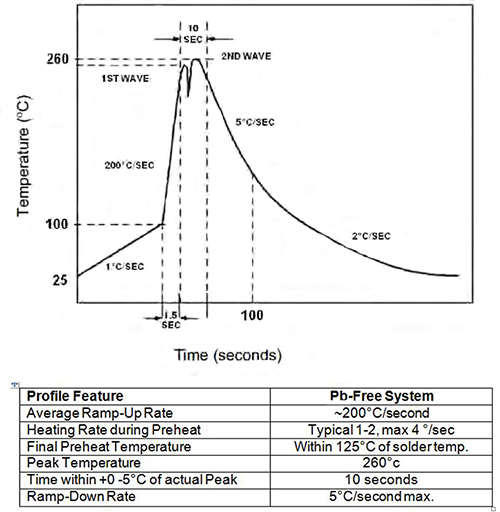 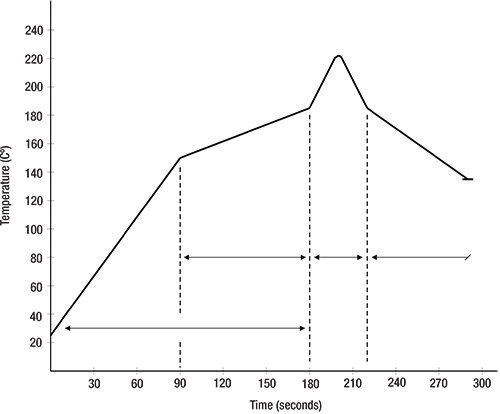 Hot gas pencils should be set up to limit the gas temperature to a maximum of 300°C at a distance of 3 mm from the nozzle tip. 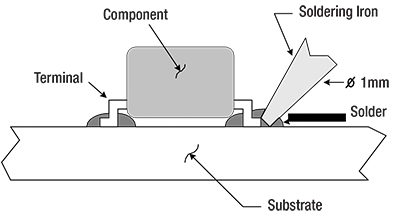