Interrupts take a lot out of a high-speed processor, especially one that is heavily pipelined and, capable of issuing more than one instruction per cycle.


Interrupts take a lot out of a high-speed processor, especially one that is heavily pipelined and, capable of issuing more than one instruction per cycle. There could be eight to ten instructions in flight at any one time that either have to be run to completion, or annulled and restarted once normal execution resumes.

Just how fast can a given MCU perform an interrupt? That is certainly affected by the application, but it seems unreasonably hard to find a number for this item.

When an interrupt occurs, the CPU saves some of its registers and executes the interrupt service routine (ISR), and then returns to the highest-priority task in the ready state. Interrupts are usually maskable and nestable.

Just to be clear, latency is usually specified as the time between the interrupt request and execution of the first instruction in the interrupt service routine. However the "real latency" must include some housekeeping that must be done in the ISR, which can cause confusion.

The value in which an electrical engineer is usually interested is the worst -case interrupt latency. This is a sum of many different smaller delays.


In more complex systems, there can be additional cause for interrupt latencies.

The Cortex-M3 also accelerates the execution of interrupt handlers with logic to automatically save its general purpose and status registers in the stack when an interrupt arrives. The M3 is made even more efficient, in certain circumstances, by tail-chaining interrupts that arrive at the same time, as shown in Figure 1.

The interrupt latency is up to 12 cycles for the Cortex-M3 processor-based MCU, and the context switch time is <4 μs, while the ARM7 is <7 μs. 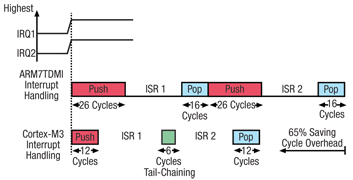 According to Keith Curtis, technical staff engineer at Microchip, the 8-bit PIC-16/PIC-18 MCUs take 12 to 20 clock cycles to get to the ISR — depending on the type of instruction that was in progress at interrupt time. Then, in the ISR, the compiler will add instructions to determine where the interrupt originated and to push some registers. If you are using assembly language, you would put in your own items that need pushing, perhaps none.

Microchip's 32-bit PIC32 MCUs, according to Adrian Aur, applications engineer, will take a maximum of 11 clock cycles to get to the ISR where you will save at least some registers — worst case, all 32 of them need one clock cycle each. If you are responding to INT7, the highest priority (and not interruptible), a set of shadow registers will be used, making response much faster. Then, the RTOS may want to make a thread change, or enable nested interrupts when running at lower priority levels, which will add some latency. Other than that, you should be fine

In 2008, Electronic Products Magazine gave Atmel a Product of the Year Award for the AVR XMEGA microcontroller family. The biggest reason for that was its innovative eight-channel event system which enables inter-peripheral communication without CPU or DMA usage using a bus separate from the data bus. The benefit of this is predictable, low-latency, inter-peripheral signal communication, reduced CPU usage, and the freeing of interrupt resources.

Independent of the CPU and DMA, the response time for the event system will never be more than two clock cycles of the I/O clock (usually 62.5 ns).

The XMEGA uses a Harvard architecture with the program memory separate from data. Program memory is accessed with single level pipelining. While one instruction is being executed, the next is prefetched. Performance is enhanced with the fast-access RISC register file — 32 x 8-bit general-purpose working registers. Within one single clock cycle, XMEGA can feed two arbitrary registers from the register file to the ALU, do a requested operation, and write back the result to an arbitrary register.