It is well known that the intermediate bus architecture (IBA) common in modern servers, workstations and telecom equipment is being enabled by a variety of isolated DC/DC converters called bricks. By providing a lower DC bus voltage, these bricks allow system designers to quickly build high-efficiency, high-density, non-isolated point-of-load (POL) buck regulators for driving various electronic loads, such as microprocessors, FPGAs, and ASICs across system boards. The task of building POL regulators is simpler now because the step-down ratio is smaller.

Recently, in the TechZone article “Higher Power, Efficiency, and Density Eighth-Brick Converters” it was shown that eighth-brick converters were being developed with more power from the same standard 2.3 x 0.9 inch (58 x 23 mm) footprint with higher efficiency, digital control, and lower cost. As a result, these bricks delivered the power and functionality of quarter bricks in the significantly smaller eighth-brick footprint with higher efficiency and density at competitive prices. Concurrently, the brick makers have also boosted the performance and power of quarter bricks because system boards are demanding more power with faster response and higher efficiency. In addition, interfaces like PMBus are being added for digital control.

Vicor, for instance, is pushing the power envelope higher while simultaneously raising the efficiency bar. Lately, the company has squeezed 850 W of output power from a quarter-brick footprint at >98 percent peak efficiency. Part of Vicor’s VI Brick® IBC series, the IB050Q096T70N1-00 can deliver maximum usable power in the least space with unprecedented efficiency and transient response. Offered as a drop-in upgrade for industry-standard 5:1 fixed-ratio converters, the IBC module operates from a 36 to 60 V input voltage range with 2,250 VDC isolation from input to output. The module simultaneously achieves very-high peak efficiency (Figure 1). It is rated at up to 80 A, but for 850 W output the input voltage range is 55 to 60 V. Likewise, for 550 W output, the DC input range is 36 to 54 V. According to the supplier, the 2.30 x 1.45 x 0.42 inch quarter-brick module’s open-frame construction facilitates airflow above and below the module to minimize temperature rise of downstream components. Consequently, it yields maximum usable power in thermally-constrained systems, allowing designers to conserve valuable board space and achieve full-load operation at 65°C ambient with just 400-LFM airflow. Per Vicor’s product datasheet, the IBC module uses proprietary Sine Amplitude Converter topology to switch at higher frequencies to raise power density and efficiency while cutting transient response time by a factor of 10. As a result, it eliminates the need for bulk capacitors across the intermediate bus. 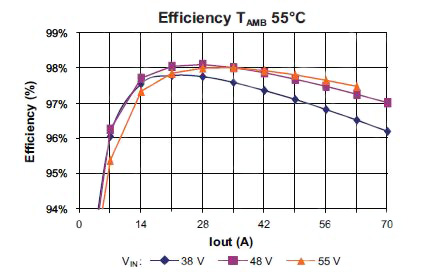 Incorporating its patented Solus power topology, CUI also has boosted the power density of NQB series quarter bricks designed to address the rising power requirements of intermediate bus converters used in telecom systems and data centers. As part of the company’s Novum Advanced Power portfolio, the NQB series is capable of supporting up to 720 W in quarter-brick footprint from an input range of 36 to 60 VDC with an output of 12 VDC while providing an efficiency of greater than 96 percent. The NQB product will eventually support a wider input range as well as an output of 9.6 VDC. Additional features include options for DOSA-footprint compatibility, remote on/off, and load share capability.

For digital control, the supplier offers its NQB-D series, which incorporates 32-bit ARM-based microcontrollers with power optimizing firmware to maximize and flatten the efficiency curve for applications where loading conditions can vary greatly. In addition, a PMBus revision 1.2 interface is available for remote control and monitoring, as well as to configure the brick for output voltage, voltage margining, fault management, precision delay ramp-up, and start/stop.

Likewise, GE Critical Power has incorporated digital control in the company’s high-power Barracuda line, which offers full regulation in a DOSA-compliant quarter-brick footprint. The PMBus armed Barracuda bricks are designed to deliver 9.6 to 12 VDC intermediate bus voltages for driving non-isolated POL converters. With a 36 to 75 VDC input range, the 12 VDC output QBDW025A0B is rated for an output power of 300 W (Figure 2). It supports a subset of the commands in the PMBus 1.2 specification. The supported commands are described in detail in the product datasheet. Controller parameters programmed using the PMBus can be stored as defaults for later use. The quarter-brick QBDW025A0B contains nonvolatile memory that is used to store configuration settings and scale factors. 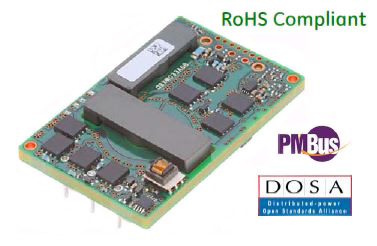 Figure 2: GE Critical Power’s DOSA-compliant quarter-brick QBDW025A0B, a member of the Barracuda series, is rated for an output power of 300 W at 12 VDC.

To achieve efficiency of 96 percent or better, Barracuda bricks incorporate synchronous rectification along with innovative packaging. Since the output is fully isolated from the input, it allows versatile polarity configurations and grounding connections. Plus, with built-in input and output filtering, the DC/DC converter minimizes external filtering.

The Barracuda brick’s output is protected against overcurrent, overvoltage, and overtemperature. For higher power requirements, the QBDW025A0B power module offers an optional feature for parallel operation. It provides a precise, forced-output voltage-load regulation droop characteristic. According to GE, the output setpoint and droop slope are factory calibrated to insure optimum matching of multiple modules’ load-regulation characteristics. Requirements for implementing load sharing are well explained in the datasheet. Other options include a baseplate for thermal management and auto-restart after fault shutdown.

The baseplate improves thermal performance when used in both natural convection and forced convection environments. Additionally, it also permits units to be deployed in conduction-cooled applications where the baseplate is attached to a larger thermal sink, or cold plate.

Normally, the input-voltage ranges for brick-type converters are 2:1, which means the maximum operating voltage is approximately twice the minimum. Typical examples are 18 to 36 V and 36 to 75 V. However, for applications where equipment may be deployed in environments where the available voltage can be quite disparate, makers like Murata Power Solutions and Bel Power Solutions are offering models with ultra-wide-input voltage ranges. In such products, the input range can be 3:1 or wider.

A good example is Murata’s quarter-brick converter UWQ-12/20-T48. Designed for wireless backhaul, a broad range of networking, and other telecom applications, it accepts input from 18 to 60 VDC to deliver 12 VDC at 20 A from a DOSA-compatible open-frame quarter-quarter-brick package occupying only 58.4 x 36.8 x 11.7 mm (2.3 x 1.45 x 0.46 inches). Offering tight load and line regulation, the unit ensures that the output voltage does not vary beyond ±1.25 percent under load changes. Typical efficiency is 92 percent and up to three units can operate in parallel to provide redundancy or load sharing for higher-out power (Figure 3). Besides offering remote on/off control, the quarter-quarter-brick converter provides protection against overcurrent, over temperature, input undervoltage, and output short circuit. Again, an optional baseplate is available for conduction cooling. 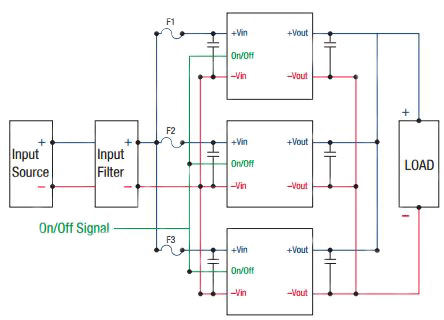 In the UWQ series, Murata has also added quarter bricks with 4:1 input capability. One such member is UWQ-12/17-Q48 with an input range of 18 to 75 VDC for a nominal 48 V input. The fixed-DC output is 12 V at 17 A current. Other features include remote on/off control, DOSA-compatible pin outs and form-factor, extensive self-protection, OVP, input undervoltage, current limiting, and thermal shutdown.

Similarly, Bel Power Solutions has readied a DOSA-compatible 240 W quarter-brick series designated UIQ to tackle wide-DC inputs of 18 V to 75 V and generate DC output of 12, 5, or 3.3 V. Model UIQ48T20120, for example, provides 12 VDC at 20 A with efficiency of over 92 percent . It is specifically tailored for operation in systems that have limited airflow and increased ambient temperatures. In addition, the brick module features a heat spreader that provides an effective thermal interface for cold-plate and heatsinking options (Figure 4). 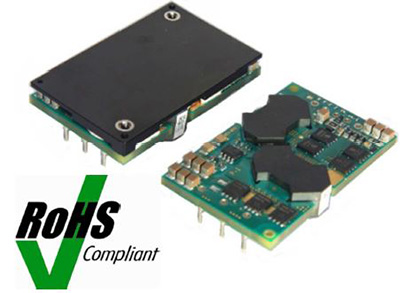 In summary, quarter-brick DC/DC converters are setting new standards in power density, conversion efficiency, and thermal performance while adding more features on the board. As a result, they are handling tasks that were earlier assigned to half and full bricks.

For more information on the converters discussed in this article, use the links provided to access product pages on the Hotenda website.