Whether it is wearable devices for healthcare or smartphones and tablets for information and connectivity, consumers are demanding products that function anywhere they are. Within that requirement, they are also looking for battery-charging solutions that will eliminate cables and connectors from their chargers. To meet these market prerequisites, wireless power charging has emerged as an attractive alternative to plug-in adapters in the last few years and it is gaining momentum because standards have emerged. Based on these standards, vendors like Texas Instruments, Freescale Semiconductor and Integrated Device Technology, among others, have begun to offer total solutions.

The reward for successfully developing wireless power solutions is considerable. According to the research and technology consulting firm IHS, about 100 million wireless power devices could be in use by the end of this year. In 2012, the number of wireless charging units was estimated to be only around 5 million. Interestingly, there are three standards organizations competing for a slice of this emerging market.1 The Wireless Power Consortium (WPC) was the first wireless-power standard launched in 2008 and the Power Matters Alliance (PMA) followed in 2012 with an alternative solution. A third initiative, Alliance for Wireless Power (A4WP) was also introduced in 2012.2

Recently, A4WP and PMA inked an agreement to merge and create a single entity for addressing consumer needs in wireless inductive charging. This alliance is aimed at creating an interoperable wireless-charging ecosystem, which is critical to the broad adoption of the technology by consumers. While A4WP is supported by companies such as Samsung Electronics and Qualcomm, PMA is backed by Duracell and AT&T.

With over 200 members, WPC’s roster is by far the highest and its wireless-charging standard Qi also is the most popular, with more than 600 Qi-certified products and more than 50 million Qi devices in the market. According to WPC, over 70 smartphones from key handset makers use Qi specifications; and about 15 car models on roads around the world offer integrated Qi-charging capability.

The Qi system comprises a power transmission pad and a compatible receiver coil in a portable device, as shown in Figure 1.  To transfer power between the two coils, the Qi system uses inductive coupling. As a result, the current in the primary (transmitter) coil generates a magnetic field, which induces current in the secondary (receiver) coil. This received current is then used to charge a battery or power a load. Typically, the distance between the two coils is 5 mm and the power drawn by the transmitter for coupling to the receiver is up to 5 W. The frequency of operation is in the 100 to 205 kHz range. This initial spec, labeled Qi v1.0, was published in August, 2009. To give more design freedom to transmitters, a Qi v1.1 was introduced a few years later. It allows larger coupling distances. Under v1.1 specs, a Qi charger can deliver 5 W through a 40 mm table top into a Qi receiver.

Figure 1:  A typical wireless power charging system uses two magnetically-coupled inductors, a transmission coil and a receiver coil. An alternating current in the transmitter coil generates a magnetic field which induces a voltage in the receiver coil. (Courtesy of the Wireless Power Consortium)

To bring more flexibility to Qi chargers, WPC updated the standard to version 1.2 in the summer of 2014.  Qi v1.2 expands the current specification to add resonant charging to the already present inductive technology within the Qi specification. It gives makers the option to discreetly embed wireless chargers deeper in structures, like furniture and desktops, as well as to utilize direct-contact, low-cost, surface applications. It also provides compatibility with v1.1 receivers.

According to WPC, member companies have demonstrated charging at a distance of 45 mm using prototype Qi v1.2 receivers. What is more, interoperability tests between existing Qi v1.1 systems and prototype v1.2 systems have been successful. That means mobile devices no longer have to be in direct contact with the charging pad. As a result, a single Qi v1.2 transmitter can charge multiple Qi devices simultaneously. Also, the latest Qi spec permits transmitters to supply up to 2000 W for kitchen applications.

A founding member of WPC, TI has developed ICs for both the transmitter side and the receiver section of the system. The company continues to expand its wireless power charging portfolio with new members. Last year, the company introduced two Qi-compliant monolithic receivers, bq51020 and bq51021. The single-chip 5 W receivers provide rectification, regulation, and digital control and communications to support Qi v1.1 specifications (Figure 2). TI said that these receiver ICs are tailored to charge Qi-compliant mobile phones, tablets, and other electronics faster and more efficiently compared to other available wireless-power solutions. The receivers feature a programmable output voltage up to 8 V and low on-resistance MOSFETs to reduce power loss by as much as 50 percent. Also, bq51021 features an I2C interface, which allows system designers to implement foreign-object detection (FOD) and a unique “pad detect” feature that makes aligning the receiver with the charger easier for a better user experience.

On the transmitter side, the company added a new-generation chip, the bq500212A, which requires fewer components to complete the solution and can operate from a USB port or 5 V power adapter. It conforms to WPC’s v1.1 type A5 or A11 transmitter coil specifications (Figure 3). In essence, the controller integrates all the functions required to control wireless-power delivery to a Qi v1.1-compliant receiver chip. Other key features include dynamic power limiting, FOD, and enhanced parasitic-metal-object detection (PMOD). As per the supplier, the chip’s comprehensive status and fault monitoring features enable a low-cost, robust wireless power system design that is Qi compliant. 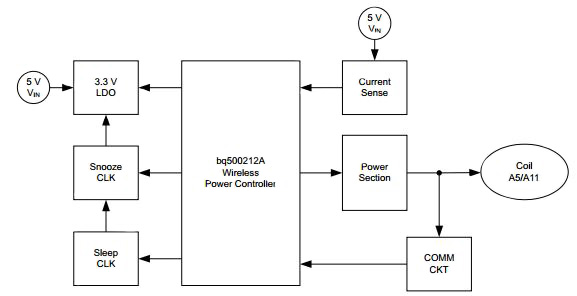 Last year, TI also introduced a dual-mode, 5-W receiver bq51221, which is compliant with both WPC’s Qi v1.1 and PMA protocols for communication and control. This single wireless-power receiver chip provides power conversion (rectification and regulation) as well as digital control and communication for both standards. No additional software development is required. In addition, it incorporates dynamic rectifier control to provide high efficiency while keeping the solution size small.

To give wireless chargers more power, TI recently unveiled the industry’s first fully integrated 10 W wireless-charging solution that is compliant with Qi standard as well as backward-compatible with 5 W Qi receivers. It includes the wireless-power receiver chip bq51025 and corresponding wireless-power transmitter bq500215. When paired together, the receiver supports programmable output voltage of 4.5 V to 10 V and achieves up to 84 percent charging efficiency at 10 W, according to TI. The fully contained wireless-power receiver solution measures only 3.60 mm by 2.89 mm and can be designed into many portable industrial designs, ranging from point-of-sale (POS) scanners to handheld medical diagnostic equipment, as well as personal electronics such as tablets and ultra-books. A typical Qi v1.1-compliant receiver circuit based on wireless-power receiver chip bq51025 is illustrated in Figure. 4. 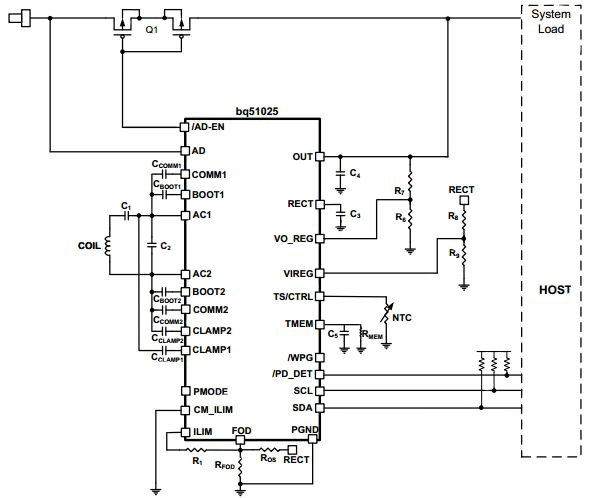 Figure 4: A Qi v1.1-compliant receiver circuit based on the wireless-power receiver chip bq51025. The output is 7 V with maximum output current of 1.4 A.

Similarly, the dedicated, fixed-frequency wireless digital transmitter bq500215 complies with Qi v1.1 for power delivery up to 5 W and uses a proprietary bidirectional communication protocol to allow charging at up to 10 W with wireless receiver bq51025. It features an FOD method to detect objects before any power is transferred, and actively cuts power when excessive loss is detected.

In short, inductive charging is growing and suppliers like TI have readied total system solutions that comply with emerging standards. In this way they have simplified the job of manufacturers looking to enter this burgeoning market while the opportunity window is wide open.