It is possible to operate LEDs in a continuous pulsed mode at higher levels, but there are trade-offs that may adversely affect efficiency, chromaticity and long-term reliability.


It is possible to operate LEDs in a continuous pulsed mode at higher levels, but there are trade-offs that may adversely affect efficiency, chromaticity and long-term reliability.

The applications support team at Cree is often asked whether it is safe to operate our LEDs with pulsed currents above the maximum data-sheet rating. This question is usually asked in the context of legitimate product requirements such as those posed by emergency-vehicle applications, specialized stroboscopic illumination and even pulsed modulation for general-illumination dimming applications.

The short answer is “it depends.” Multiple variables affect both initial and long-term performance and reliability of an LED. These include thermal resistance, pulse duration, as well as current amplitude, frequency and duty cycle.

In general, Cree’s XLamp™ LED product portfolio is sufficiently broad to accommodate the great majority of illumination and pulsed-current illumination requirements within the data-sheet specifications for these components. Products such as the XLamp XM-L have multi-ampere max-current specifications.

However, to explore the limits of the possible, but not necessarily reasonable, we’ll review three types of overcurrent conditions:

Electrical overstress (EOS) is often associated with catastrophic failures such as an electrostatic discharge (ESD), in-rush current, or other types of transient electrical surge.¹ Designers of LED drivers should be sure to take all necessary precautions to protect the LEDs from EOS. The second type of over-current condition is often associated with applications in which the LEDs operate in a flashing mode such as emergency vehicle lights, strobe lights, or signaling beacons. High-frequency pulsing, i.e., greater than 120 hertz, is often used to control the brightness of LEDs in dimming applications. Finally, ripple current is a repetitive, cyclical peak-to-peak variation in a direct-current waveform that may be derived from an insufficiently filtered alternating current source or switched-mode power supply.

Within specification boundaries, none of these conditions is cause for concern in regard to the long-term lumen maintenance or reliability of the LED. But any of these in an “over-current” situation, i.e., beyond data-sheet specification, can decrease LED lifetime.

Single-pulse over-current events are often the result of an unintentional application of excessive electrical energy to one or more LEDs and typically lead to a catastrophic failure of the device(s). Cree XLamp LEDs are capable of withstanding current transients that are several times higher than the maximum rated current. But, the exact amplitude that a particular LED device can withstand is also a function of the duration and frequency of the transient. Beyond a certain threshold, a single-pulse event will lead to an immediate catastrophic failure of the LED. In this case, there are two general failure modes: a short circuit or an open circuit.

The main factor limiting an LED’s ability to withstand an EOS event is the current-carrying capability of the LED chip and internal interconnections. Current density is given as the electric current per cross-sectional area and is usually measured in amperes-per-square-meters (A/m2). Conventional electrical conductors have a finite resistance, causing them to dissipate power in the form of heat. Current (and therefore current density) must be kept sufficiently low to prevent the conductors from melting or fusing, or the insulating material from breaking down. For example, at high current densities material forming the interconnections can move. This phenomenon, known as electromigration, occurs when some of the momentum of moving electrons is transferred to nearby ions, causing them to dislocate from their original lattice positions. Electromigration does not occur in semiconductors directly, but in the metal interconnects deposited onto them. Over time, electromigration can transport a significant number of atoms far from their original positions and contributes to a device breakdown.

A localized increase of current density, known as current crowding, is an inhomogeneous distribution of current density through a conductor or semiconductor, especially at the vicinity of the contacts and over the p-n junctions. One of the known factors that limit the efficiency of LEDs, and materials with low charge-carrier mobility, such as indium gallium nitride (InGaN), are especially prone to current crowding.

Conversely, localized lowering of current density, with an implied current-density gradient, may lead to deposition of migrated atoms from current-“crowded” regions. In a similar self-propagating cycle, this can lead to further lowering of current density and further deposition of migrated ions, even the formation of small protuberances, which in turn can cause short circuits.

These effects can always be mitigated with proper power-supply design, which prevents electrical transients from reaching the LED component.

Another theoretically limiting factor is the current-carrying capacity of the bond wire(s) to the LED chip. If the current-carrying capacity is exceeded (as in a massive EOS), the conductor(s) fuse and cause an open circuit. While the exact physics involved in the fusing of a metal wire or conductive pad are beyond the scope of this document, the factors include the wire length and diameter, the type of bonds (ball or wedge), and physical material properties of the metal, including melting point, thermal conductivity, electrical resistivity, etc. Fusing of the bond wire is a highly uncommon, secondary failure that occurs only after the chip has already failed and continues to be subjected to excessive current, which in turn leads to overheating of the bond wire(s).

The second type of over-current condition, high-current repetitive pulsing, may or may not result in an early catastrophic failure of the LED. Repetitive high-current pulsing may result in a shortened life expectancy for the LED compared to the usual expected lifetime, on the order of tens or hundreds of thousands of hours. A particular device subjected to repeated transients at an amplitude some percentage above the data-sheet limits but below the threshold required for single-pulse failure will still eventually fail. The failure mechanism will most likely be due to electromigration as enough metal ions are eventually shifted away from their original lattice positions. The other factor that can lead to a reduced lifetime is excessive heating of the p-n junction, which causes the LED’s output to degrade below 70 percent of its original luminous flux.

Cree’s Application Engineering group tested four different types of XLamp LEDs at pulsed currents over a broad range of currents, including levels well above the maximum-rated continuous current. The data shows that, above certain levels, there is little gain in light output and efficiency decreases. Thus Cree does not recommend that customers operate LEDs at such extreme levels. The following charts show the relationship between current amplitude and luminous efficiency typical of white XP-C, XP-E, XP-G and MX-6 LED devices operating at three different duty cycles (5 percent, 20 percent, and 50 percent), at a frequency of 1000 Hz.² The chart for the XM-L LED shows the relationship typical of the LED operating at the 20 percent duty cycle. The dashed vertical line in each graph represents the maximum-rated continuous current for each XLamp LED product type.

The relationship between light output and forward current is non-linear, as is the relationship between forward voltage and current. For example, increasing the drive current to the LED by a factor of two will result in an increase in power greater than a factor of two as shown in Table 1 (derived from the data in Figure 4). The same holds true for light output. Doubling the current does not double the output, and in fact, above a certain point, light output may even decrease as the internal temperature of the LED rises. 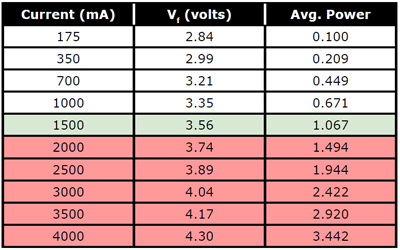 In addition to reduced efficiency, there are other potential problems caused by driving LEDs at high currents, including chromaticity shift. As the LED forward current increases, the x and y color coordinates begin to shift to the left and downwards on the International Commission on Illumination (CIE) 1931 color space, resulting in an increase in correlated color temperature (CCT). Table 2 shows data typical for a Cool White and a Warm White XP-E LED.

Figure 7 and Figure 8 show information from the same data set plotted in the CIE color space, with the averaged results of five XP-E LEDs showing the chromaticity shift within the maximum specified driving current (the green data sets) and the continuing chromaticity shift when driven at over-current specifications (the red data sets). 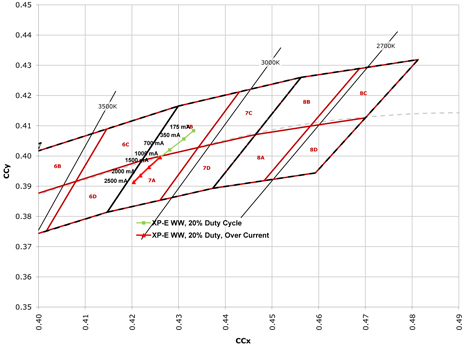 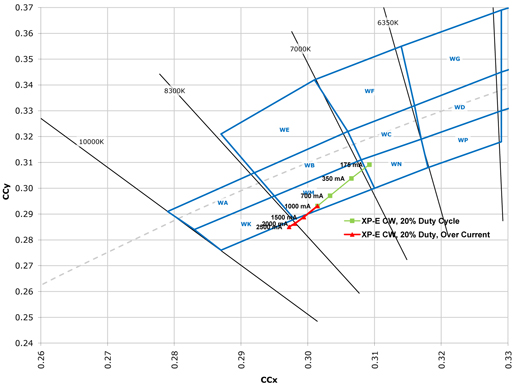 An even greater long-term reliability concern is the effect of operating LEDs at elevated currents. This is due to heating of the p-n junction, especially for duty cycles greater than 25 percent. To determine if the maximum junction temperature (Tj) will be exceeded, one must measure the current (If), voltage (Vf) and case temperature (Tc) of the LED. For a pulsed LED, the power is proportional to the duty cycle (D); therefore, the following formula can be used to calculate Tj.

However, this is only part of the equation. The ambient temperature and thermal resistance from the case to the ambient air must also be factored in. Proper thermal-management techniques must still be followed.³

Based on the 1 KHz pulse testing we have reviewed in this application note, Cree suggests the following guidelines for pulsed current operations:

In addition to degradation in light output, other properties that may be affected by high-current operation over the long term are color-point stability, reverse-leakage current and forward voltage. Cree recommends that customers perform their own long-term testing to ensure the reliability of their design.

Ripple current is a periodic peak-to-peak variation in the current waveform (See Figure 9 and Figure 10). Unfiltered, rectified 120 Hz signals are routinely used to drive LED illumination applications and within specification boundaries pose no problems whatsoever for the LEDs. However, excessive ripple current is cause for concern, but not just for the LEDs. It can also be a concern for electrolytic capacitors on the output filter stage of an LED driver. High ripple currents can lead to overheating of the capacitors and exacerbate early failure of the driver circuitry. There is also a chance that, if the filter capacitors fail, transient currents that would otherwise have been attenuated become present and may in turn damage the LED. 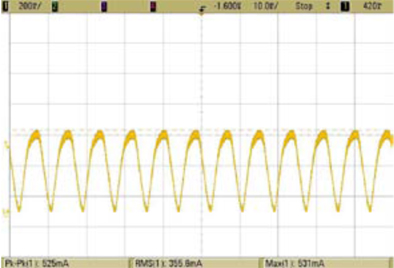 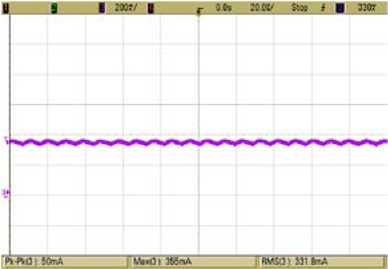 Large swings in peak-to-peak current may also affect the luminous efficiency of the LED. An example is a sample XP-E lamp with the luminous flux given in Table 3.

While Cree’s XLamp products are capable of withstanding current transients well above the maximum rated continuous current, there are physical limits that must not be exceeded in order to avoid EOS. It is possible to operate LEDs in a continuous pulsed mode at higher levels, but there are trade-offs that may adversely affect efficiency, chromaticity and long-term reliability.

For certain specialized applications, there may be a good reason to exceed maximum-current ratings to achieve a desired level of performance. However, for these cases, Cree recommends that customers perform their own lifetime testing when proving out a design that will deliver any of the three over-current conditions described here. It is the customer’s responsibility to determine if the trade-offs will be acceptable. Cree cannot make any guarantees regarding reliability or performance when using our products outside the published specification limits.4 Customers who have questions or concerns about their unique applications are encouraged to contact Cree’s applications support team for technical guidance with respect to product selection and system design.