There are wide varieties of electronics applications, including Power-over-Ethernet, datacom, telecom, and industrial that operate from a 12 V, 24 V or 48 V input and require an isolated switch-mode power supply solution to convert this available input voltage to a regulated output voltage and current. For power levels below 60 W, the most common power supply switching topologies used are the continuous mode flyback topology and the active reset forward topology. The leading transformer platform for these applications, at present in terms of power efficiency, board area, and cost, is the de facto industry standard EP13. This article has been created to detail the development of the EP13 Plus platform, which has the same physical size and footprint as the EP13 but is capable of handling higher through-power. Figure 1 below shows the design for an optimized transformer.

As system efficiency becomes increasingly more important and output power requirements continue to increase, two limiting factors emerge when using the industry standard EP13. The first is pin size and coplanarity. Surface-mount transformers must have excellent coplanarity to ensure that the leads are properly soldered to the printed circuit board and to avoid excess heating in the solder interconnection. However, the standard EP13 platform was initially developed for low current telecom filter magnetics so the pin is small and there is little room to terminate higher current windings. As a result, the standard EP13 platform limits the size and number of wires that can be terminated on a pin, and therefore increases the transformers resistance, which limits the through-power. Pulse Electronics took on the goal of creating a more efficient transformer while maintaining the same package size and footprint as the standard EP13. To solve the limitations caused by the pin size, as Figure 2 shows, Pulse’s EP13 Plus platform has employed a larger pin with twice the winding termination area resulting in a 20% reduction in winding resistance and therefore higher through-power.

Pulse Electronics used finite element analysis to analyze the standard EP13 platform and found that the non-uniform core cross-section is not optimized. Using the same finite element analysis tools, Pulse created the optimized EP13 Plus core, which allows the cross-sectional area to be increased without increasing the overall platform size. This development has allowed for a 45% increase in core area, which leads to lower primary winding turns, resulting in lower winding resistance and higher through-power.

The graphs below show the core area optimization in further detail. In Figure 3, the top picture shows the finite element analysis of the flux density of the standard EP13 platform. The red areas indicate high magnetic flux density. It can be seen in the picture that the entire center leg of the standard platform has very-high flux density, or inversely, that the remaining core area is under-utilized. The second picture shows the flux density of the EP13 Plus platform core and the dramatic reduction in flux density. The uniform coloring indicates that the flux levels are constant throughout the core resulting in an efficient, three-dimensional core utilization. 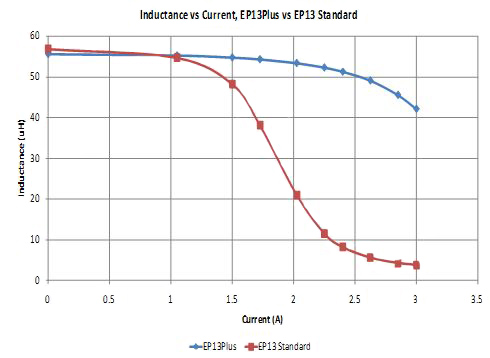 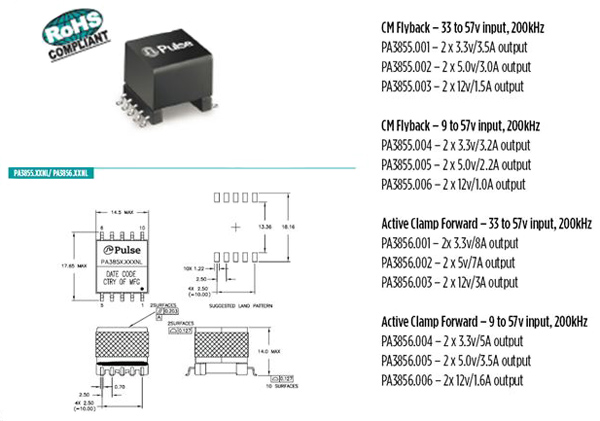 In summary, Pulse Electronics has used finite element analysis to create the EP13 Plus transformer platform and have released twelve new catalog transformer designs all based on the industry standard EP13 platform. The new EP13 plus platform allows for a 45% increase in core cross-sectional area, a 68% increase in the useable magnetic flux saturation limit and a 25-35% increase in through-power capability making it the ideal solution for 20-70 W power transformer applications.