It is important for the electronic system you are using to know how near an object is to its target. To accomplish such tasks, engineers can employ a wide variety of sensor technologies, capacitive, magnetic, or optical.


Whether you are trying to dock a spacecraft with the International Space Station, place a component on a board using a robotic arm, or simply click on a link on your smartphone, it is important for the electronic system you are using to know how near an object is to its target. To accomplish such tasks, engineers can employ a wide variety of sensor technologies, capacitive, magnetic, or optical, to determine how close one object is to another. However, the choice of technology is very much dependent on the particulars of the application.

While these types of sensors can be grouped together under the general category of proximity sensors, sensors in the category are often more familiarly known by other names, such as touch sensors or Hall-Effect sensors. However, by looking at all types of technologies and their implementations, engineers can make use of one of the more creative aspects of the profession, utilizing a component intended for one specific task in a wholly new and imaginative way.

In this series of articles, we will take a look at the different technologies and their strengths and weaknesses, using examples of currently available proximity sensors and their typical uses. To begin, this article, Part 1 of the series, will look at one of today’s most commonly used proximity sensing techniques, capacitive sensing. Future articles will cover magnetic and optical sensing.

Almost anyone who uses one of the current crop of smartphones is familiar with capacitive touch proximity sensors. Basically, these sensors rely upon the proximity of a finger or stylus to initiate some action. Since touch is a very common mode of interface in today’s electronic systems, it stands to reason that there are a wide number of suppliers in this category, including Analog Devices, Atmel, Cypress Semiconductor, Freescale, IDT, Microchip Technology, and STMicroelectronics, to name a few.

The basic element of capacitive sensors can be made from many different materials, such as copper, indium tin oxide (ITO), and printed conductive ink. While copper-based sensors can be implemented on standard FR4 PC boards (PCB), as well as on flexible material, ITO has the advantage of allowing the sensor to be up to 90% transparent and is the approach commonly used for touchscreens. There are two types of capacitive sensing: There are also two approaches to implementing these types of sensing: surface and projected capacitance. With surface capacitance, only one side of the capacitor’s rectangular plate-gap insulator is coated with conductive material; the other side is where an object, a finger or conductive stylus, will make direct contact with, and actually become part of, the sensor (Fig. 1). When a small voltage is applied to the coated side, it produces a uniform electrostatic field, and when a conductive object makes contact with the uncoated side, a capacitor is created.

Figure 1: With surface capacitance, a finger or stylus becomes an electrode and its location can be determined by taking measurements at the four corners of the surface.

Due to the sheet resistance of the surface, the effective capacitance as measured at each corner will be different, and based on these differences, the point of contact can be determined. The larger the change in capacitance, the closer the touch is to that corner. It is the job of the sensor's controller to determine the location of the touch.

While surface capacitive sensing can provide false touch signals due to parasitic capacitive coupling and needs calibration during manufacture, it is extremely durable. The technique has found application in industrial controls and interactive public kiosks.

On the other hand, projected capacitive touch (PCT) technology, which uses an X-Y grid of electrodes formed either by etching a single layer or by using two opposing layers with lines etched perpendicularly (Figure 2), can be more accurate and flexible than surface capacitance approaches. PCT’s greater resolution lets the sensors work without the direct contact of an object, so conducting layers can be coated with protective layers. Therefore, PCTs can operate under screen protectors or behind weatherproof and scratch-resistant glass. 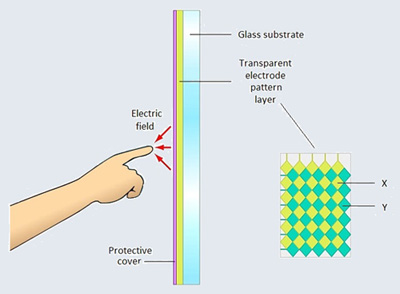 Figure 2: With projected capacitance, the finger or stylus serves to alter the capacitance at points on an X-Y grid of transparent electrodes; by measuring the X-Y coordinates of disturbances, one or more simultaneous touches can be located.

There are two types of PCT, mutual and self-capacitance, and, depending on the implementation, not only a finger but also an active or passive stylus can be used. This is often the technology of choice with point-of-sale (PoS) devices, where the customer must acknowledge a delivery or a credit charge. Again, according to implementation, gloved fingers may or may not be sensed and conductive smudges, dust, and similar interference on the panel surface can interfere with performance.

Mutual capacitive sensors have a capacitor at each intersection of the rows and columns in the grid. For instance, a 3-by-4 array would have 12 independent capacitors. When a voltage is applied to the rows or columns, such as a finger or conductive stylus near the surface of the sensor, the local electric field changes, thereby reducing the mutual capacitance. The capacitance change at each intersection point on the grid can be measured accurately to determine one or simultaneous touch locations, and therefore, mutual capacitance permits multi-touch operations, such as “pinching” or expanding.

The actual implementation of a sensor grid using one of the materials mentioned previously (copper, ITO, or conductive ink), is generally done on a custom basis to suit the application in hand. However, there are a large number of different chips for taking over control and interpretation of sensor input once the form on the sensor-node arrangement has been established.

An example of a device for use in surface-capacitance-type systems is the AD7148 programmable touch controller for single-electrode capacitance sensors from Analog Devices (Figure 3). This is essentially an integrated capacitance-to-digital converter (CDC) and is designed for use with single-electrode capacitance sensors (where a finger or other implement becomes the other electrode, or plate, of the capacitor) in implementing such functions as buttons, scroll bars, and wheels. The sensors need only one PCB layer, enabling very thin applications. There is an active shield output to minimize noise pickup in the sensor and on-chip environmental calibration. 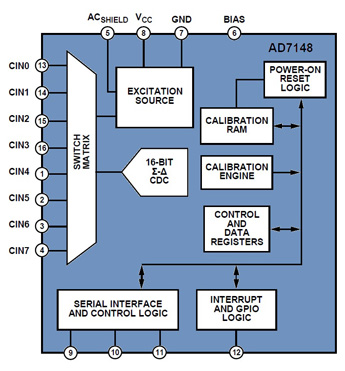 As seen in Fig. 3, the AD7148’s CDC has eight inputs channeled through a switch matrix to a 16-bit, 250 kHz sigma-delta (∑-Δ) converter. The CDC is capable of sensing changes in the capacitance of the external sensors and uses this information to register a sensor-activation event. The external sensors can be arranged as a series of buttons, as a scroll bar or wheel, or as a combination of sensor types. By programming the control registers, the designer has full control over the CDC setup.

The on-chip calibration logic automatically compensates for changes in the ambient environment. To ensure that there are no false or non-registering touches on the external sensors due to a changing environment, the calibration sequence is automatically performed at continuous intervals as long as the sensors are not touched.

The AD7148 also has an I²C-compatible serial interface, as well as an interrupt output. There is a VDRIVE pin to set the voltage level for the serial interface, independent of chip’s supply voltage, VCC. The AD7148 operates from a 2.6 V to 3.6 V supply, and typical operating current is 26 μA in low-power mode. The controller is available in a 16-lead, 4 × 4 mm LFCSP.

A typical application for the AD7148 is shown in Figure 4. Here, the chip controls inputs from three buttons as well as a 5-segment slider. Note that connecting the plane around the sensors to ACSHIELD helps reduce noise and prevent false inputting to the chip.

Figure 4: In a typical AD7148 application, five channels are dedicated to creating a slider sensor, while the remaining three sense touches on buttons (Courtesy of Analog Devices).

The CAP1133’s three LED drivers offer full-on/off, variable rate blinking, dimness controls, and breathing (dim, undim). Each of the LED drivers may be linked to one of the sensor inputs and actuated when a touch is detected. Each LED driver may also be individually controlled by a host controller.

The CAP1133 also provides multiple-pattern touch recognition, which lets the designer select a specific set of buttons to be touched simultaneously. If this pattern is detected, then a status bit is set and an interrupt generated.

Additionally, the CAP1133 includes circuitry and support for enhanced proximity detection. The device offers multiple power states operating at low quiescent currents, the Standby state, in which one or more capacitive touch sensor inputs are active and all LEDs may be used, and Deep Sleep, a state in which no sensor inputs are active, but communication with the device will wake it. Deep Sleep is the lowest power state available, typically drawing just 5 µA.

A more complex controller is Semtech’s SX9510 (Figure 6). Designed for such applications as TV remote controllers, it is an 8–button capacitive touch sensor controller with advanced proximity sensing, featuring eight LED-driver channels, an IR detector, a buzzer, and analog outputs. The IC can operate autonomously, using a set of programmable button sensitivities and thresholds. LED intensities and breathing functions are also programmable, with no external I²C communication required. It has three individual LED driver engines for LED lighting control. 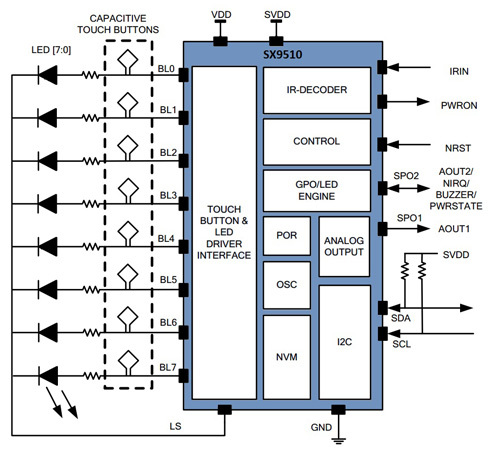 Figure 6: The Semtech SX9510 is designed for applications such as TV controllers. The system can be set up to detect when a user is in proximity to it, and perform a function such as lighting all LEDs (Courtesy of Semtech).

The SX9510 can detect when a user is in close proximity; upon detection, it causes all LEDs to illuminate to a pre-programmed intensity. Touching a button will enable a corresponding LED to enter a preprogrammed mode such as specific intensity, blinking, or breathing. Whenever the capacitive value changes, from a proximity detection or finger touch/release, the controller can inform a host processor via analog outputs, or through an open-drain interrupt and an I²C register read.

The SX9510 will adapt to humidity and temperature changes to guarantee correct touch/no touch information. It comes in 20-ld QFN and 24-ld TSSOP packages and operates over a -40°C to +85°C range.

An example of a matrix layout touch controls is the Atmel QT1481 (Figure 7). It includes all signal processing functions needed to provide stable sensing under a wide variety of changing conditions. 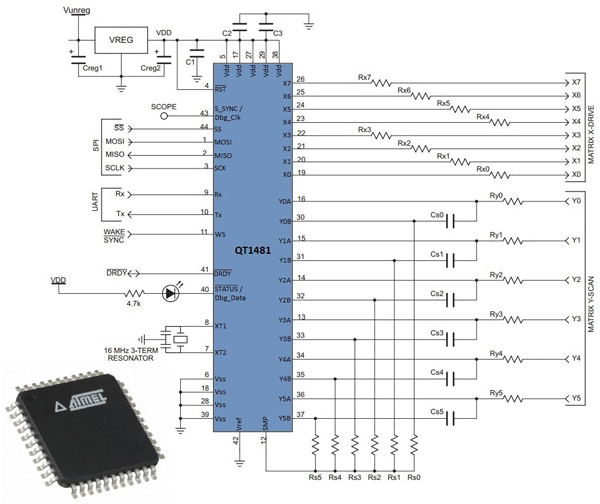 Figure 7: The Atmel QT1481 matrix-layout touch controller employs traverse charge transfer (QT) sensing to sense changes in the electrical charge forced by a pulse edge across two electrodes in an X-Y matrix caused by the presence of a figure or conductive stylus (Courtesy of Atmel).

The QT1481 employs traverse charge transfer (QT) sensing; it senses changes in electrical charge forced by a pulse edge across two electrodes in an X-Y matrix. The device allows a wide range of key sizes and shapes to be mixed together in a single touch panel, and it is designed for use with up to 48 keys.

Usable with either UART or SPI interfaces, the device protocol uses simple single-byte commands and responses in most instances, to minimize data traffic while maximizing information conveyance. The device can also report actual signal strengths and error codes. The QT1481 is able to scan the touch matrix twice as fast as previous generation devices, and so is better able to continue normal operation amid heavy noise.

Subsequent articles will report on magnetic and optical proximity sensor solutions. For more information on the parts discussed in this article, use the links provided to access product pages on the Hotenda website.