Devices with a PMBus interface from suppliers including Texas Instruments, Linear Technology, and Intersil.


ASICs and FPGAs used in modern datacenter servers and cloud-computing systems demand high-power density, high efficiency and very-fast-load-transient response from point-of-load (POL) step-down DC/DC converters. The output voltage and current, along with fault conditions, of these highly integrated, fast-responding POL-converter modules must be monitored in real-time. At the same time, for proper thermal management, the external temperatures of these devices must also be monitored in real-time. If these design obligations are not enough to ensure full workdays for engineers, the desired output voltage changes require programmability to minimize power wastage.

To address these requirements, Texas Instruments has added new high-current, non-isolated buck DC/DC converters with PMBus (an abbreviation of Power Management Bus) interface to its SWIFT family. While delivering up to 30 A of output current and switching at high frequency, the PMBus-compatible converters, TPS544B20 and TPS544C20 enable designers to configure them and monitor their key-design parameters, including output voltage, current and external temperature using the PMBus interface. Similarly, Linear Technology and Intersil, among others, have also readied high-current, variable output, step-down PMBus-compliant digital DC/DC converters.

Traditionally, in the analog world, DC/DC converters are programmed using external resistors and capacitors. However, today’s digital technology allows a designer to configure, monitor and control a power supply using signals via an interface like PMBus. It is an open-standard digital-power-management protocol managed by the System Management Interface Forum (SMIF), which is also credited with developing the SMBus and Smart Battery standards. The PMBus-command language enables communication between components of a power system. It comprises standard and device-specific commands. The specifications were first released in March 2005 and several revisions have been introduced since then.

Today, there are three parts to this specification. Part I of the specification describes message transport and Part II defines the command language. Part III was recently introduced in revision 1.3, wherein AVSBus provides a mechanism for logic devices, such as microprocessors and FPGAs, to quickly adjust their supply voltages in order to minimize power consumption.

In Part I of the PMBus specification, the SMBus is specified as the basic-transport mechanism. Like the popular I²C bus, SMBus is a two-wire bus with clock- and data-signal lines. However, the PMBus includes a third signal line, the SMBALERT that permits slave devices such as POL converters to interrupt the system host/bus master. According to the Forum, the SMBus was chosen because it has several advantages over the I²C in the electrically noisy environment of a power supply. Figure 1 shows a typical system with a PMBus interface. 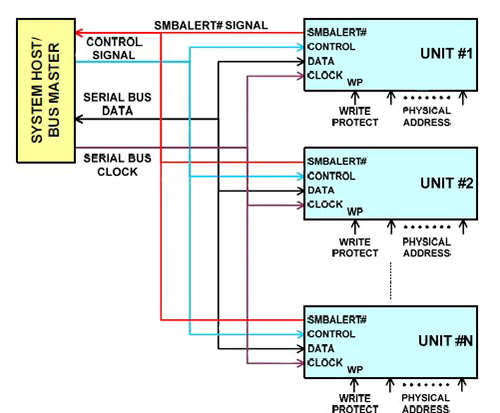 Since PMBus-compliant devices must power up in a state that is safe for the system, they are pre-programmed at the manufacturer’s plant with parameters including the output voltage and fault-protection thresholds. Consequently, when such power supplies are installed in a system they power up without ever receiving communication through the serial bus. In other words, the standard allows the initial power-up configuration to be stored in non-volatile memory or to be configured through pin programming of the PMBus device.

Part I also includes some extensions to the SMBus transaction protocols, for example, sending a GROUP command to several PMBus devices simultaneously. Plus, it includes an optional hardwire write-protect (WP) input signal that prevents changes to the on-board memory.

Similarly, Part II of the PMBus specification describes the command language. The command set is extensive and it enables setting and adjusting the output voltage, controlling the operation of the power supply and configuring the power supply, such as setting the switching frequency, establishing options for interleaving and fan speed control, setting fault and warning protection thresholds, configuring the response to a fault condition, and reading go/no go and parametric status information. In addition, specifications allows manufacturers to customize some of these commands.

Consequently, the basic single-byte format permits 256 commands, each of which may be followed by zero or more bytes of data. The product-data sheet lists some of the standard commands that TI’s TPS544B20/C20 converters implement to enable the host to monitor and program key operating parameters. For example, the nominal-output voltage of the TPS544B20 based DC/DC converter can be adjusted by changing the feedback voltage VFB using the command VREF_TRIM. This adjustment range is between -20% and +10% from the nominal output voltage. The resolution of adjustment is 7 bits with a minimum step size of 2 mV or 0.4%. 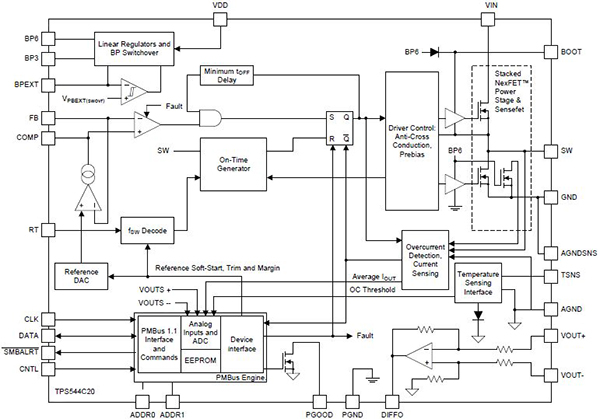 The digital controllers TPS544B20 and TPS544C20 are fully supported by TI’s Fusion-Digital-Power-Designer software, which is a graphical user interface (GUI) used to configure and monitor the devices according to the PMBus-interface protocol via a TI USB-to-I²C/GPIO adapter (Figure 3). The software can be downloaded from the company website. As shown in Figure 4, real-time parameters like input voltage, output voltage, output current, temperature, and warnings/faults are continuously monitored and displayed by the GUI. Likewise, another template allows the user to configure common operating characteristics such as output voltage, warning and fault thresholds and switching frequency. 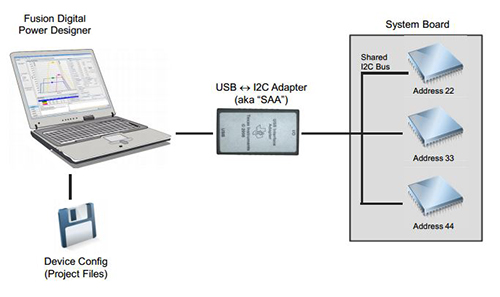 Figure 3: TI’s Fusion-Digital-Power-Designer software is a graphical-user interface (GUI) used to configure and monitor the devices according to the PMBus-interface protocol via a USB-to-I²C/GPIO adapter. 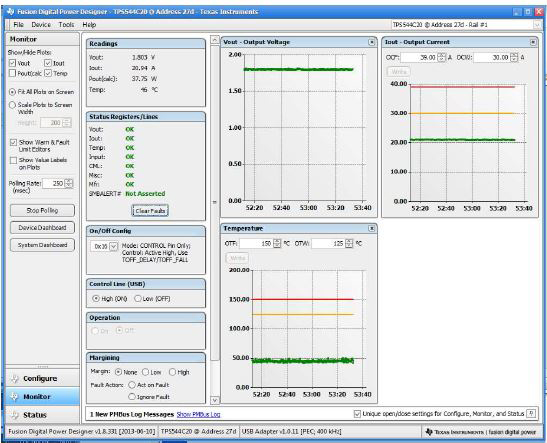 Like TI’s PMBus-compatible converters, Linear’s PMBus-compliant synchronous step-down switching regulator LTC3883 is supported by the LTpowerPlay software development with GUI. According to the supplier, with LTpowerPlay designers can easily program and control the entire power system without writing a line of code. With this tool, it is easy to configure the chip on the PMBbus, verify system status, read the telemetry, check fault status and control supply sequencing. LTpowerPlay is available for download from the LTpowerPlay website.² Similarly, Intersil uses PowerNavigator to configure its devices.

In summary, with digital controllers gaining momentum in the power supply world, more and more suppliers are offering devices with a PMBus interface, supported by a complete software-development tool to ease the transition from analog control to digital control.