Printed Circuit Board Shipments and New Orders Fell in July

However, the declines are consistent with historical seasonal patterns, according to the IPC. 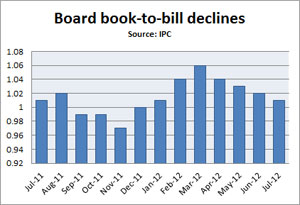 A ratio of 1.01 means that board manufacturers revived $101 in new orders for every $100 of orders they shipped in July.

The sharp declines in North American PCB sales and orders in July from June reflect “normal seasonal patterns,” said Sharon Starr, IPC director of market research. “Strong flexible circuit sales in July cushioned the fall. This strong sales performance was not surprising, given the high book-to-bill ratios for flexible circuits seen in the first half of the year,” she said.

Book-to-bill ratios and growth rates for rigid PCBs and flexible circuits combined are heavily affected by the rigid PCB segment. Rigid PCBs represent an estimated 90 percent of the current PCB industry in North America. Flexible circuit sales typically include value-added services such as assembly, in addition to the bare flexible circuits.