Overall weak board demand resulted in the board book-to-bill-ratio falling below 1.00. 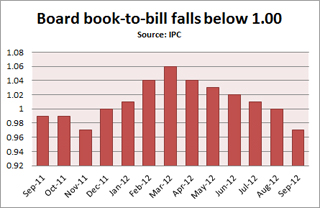 The book-to-bill ratio for rigid boards and flexible circuits combined fell to 0.97 in September, the lowest the ratio has been since November 2011.Combined shipments of rigid printed circuit boards (PCBs) and flexible circuits declined 6.7 percent and new orders fell 2.2 percent compared to September 2011, according to the Association Connecting Electronics Industries (IPC).

Year to date, combined industry shipments were down 4.8 percent and bookings (new orders) were down 0.2 percent. Compared to August 2012, combined industry shipments in September increased 9.8 percent, but bookings declined 0.3 percent. The combined rigid and flexible book-to-bill ratio in September 2012 fell below parity to 0.97 from 1.00 in August. A book-to-bill ratio of 0.97 means that board manufacturers received $97 in new orders for every $100 of boards that they shipped in the month.

“North American PCB sales in September continued below 2011 sales, but improved over the preceding month, following normal seasonal patterns,” said Sharon Starr, IPC director of market research. She added that sharp declines in flexible circuit orders over the past three months pushed the overall PCB book-to-bill ratio below parity. “The volatility of the flex business means this effect will probably be short-lived,” said Starr.

Rigid PCBs represent an estimated 90 percent of the current PCB industry in North America. Flexible circuit sales typically include value-added services such as assembly in addition to the bare flexible circuits.