Prices for 2 GB DDR3 DRAM Will Fall in Second Half

Oversupply and sluggish demand are driving down DRAM tags.

The average price for a 2 gigabyte (GB) double data rate 3 (DDR3) DRAM will decline 24 percent to $1.60 in the third quarter because of oversupply and sluggish demand, according to researcher IHS iSuppli. Buyers can also expect the price to fall another 22 percent to $1.25 in the fourth quarter. One year ago, the price of a 2 GB DDR3 DRAM chip was $4.60. 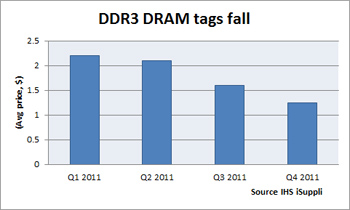 Weak demand and oversupply is driving down DDR3 DRAM prices.DRAM chips are packaged in DRAM modules, and the average contract price for modules is also declining. Researcher DRAMeXchange in Taiwan reported that the price of a 2 gigabyte module dropped from $18.75 in May to $11 in August.

“The third quarter is shaping up to be pretty bloody for DRAM makers,” said Mike Howard, principal analyst, DRAM and memory at IHS iSuppli. “The combination of inventory reductions by DRAM makers and more bytes coming out of the fabs is resulting in a very soft pricing environment.”

As much as a 15.9 percent increase in shipments is anticipated in the third quarter, and prices are not expected to firm up anytime soon as a result, IHS iSuppli believes.

DRAMeXchange in Taiwan reported that current commodity DRAM byte output is about 20 percent greater than demand. Because of the sluggish global economy, computer demand has been weaker than originally forecast and PC OEMs have cut back production. PC annual growth has been adjusted downward to 2.5 percent from 7.5 percent at the beginning of the year, according to DRAMeXchange.

The forecast for notebooks has also been significantly reduced, from the originally estimated 11 percent to 2.1 percent. In addition, there has been no significant increase in DRAM content per box. The computer segment is the dominant user of DRAM.

While it will be a buyer’s market for DRAM through the year, savvy memory chip buyers know low prices will not last indefinitely. With prices falling, buyers can expect DRAM suppliers to shift production to higher margin memory ICs such as NAND flash. DRAM capacity will likely be cut back to reduce supply. This will lead to firming or even declining prices next year. In fact, some DRAM makers have already started to adjust DRAM production levels.

Powerchip, ProMOS, and Nanya have already decreased output, while Rexchip and Inotera may follow suit, according to DRAMeXchange. Elpida has also adjusted its commodity DRAM production volume and Hynix is expected to reduce the proportion of commodity DRAM shipments. It remains unclear what Samsung and Micron plan to do in terms of DRAM production, reported DRAMeXchange.