Prices are Flat to Down for Frequency Control Devices

Crystek's CCHD-957 ultra-low phase noise clock oscillator targets high-definition audio equipment applications.Pricing for crystals and oscillators are flat to down in 2013, according to frequency control manufacturers. While this is good news for buyers, it means component manufacturers have to work a little harder to grow. In the more good news category for buyers, lead times remain stable in the six- to eight-week range.

Lead times are still holding stable at roughly eight weeks, says Anthony Mastropole, president, Crystek Corp., Ft. Myers, Fla. "This gives us a chance to bring in raw materials, put them in a line, get the product through QC [quality control] and out the door."

Mastropole says lead times are more stable in 2013 compared to last year when some products had lead times of 10 weeks for a few quarters. This was a residual effect from the flooding in Thailand that slowed down the materials supply chain. Crystek produces the majority of its products at its Ft. Myers facility. Only quartz crystals and low-end crystal oscillators are contracted out to Asia.

"Commodity pricing is also starting to stabilize as well as our costs,” he says.

However, Ambrose adds that the company implemented some price hikes last year due to higher commodity prices during the previous three to four years. 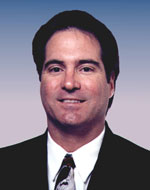 Fox says low-end devices are eroding about 5% to 7%, while tags for middle-range products are falling 3%, and 1% to 2% for high-end devices.

"When you're dealing with price erosion, you have to work harder than ever to grow, and it's about having the right mix of product to take market share in a flat market," Fox says.

In most cases, new products garner higher margins out of the gate. This is why many component manufacturers focus much of their research and development (R&D) dollars on new product development for high-performance parts rather than commodity devices.

"XpressoO is a true differentiator for us," adds Fox. "There are 180 frequency control companies, so it's tough to differentiate yourself on crystals. We've been able to stand out because of XpressoO's performance and the ability to deliver custom product in a day or two." 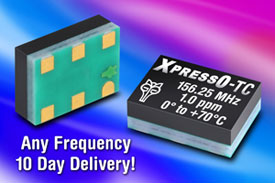 Fox's XpressO-TC TCXO's with tight stabilities and custom frequencies
up to 250 MHz are available in ten working days or less.

The company also plans to launch its XpressO Ultra ultra-precision oscillator, targeting networking and cloud computing. Custom frequency devices will be available in one to two days at a "significantly reduced price compared to the competition," says Fox. The devices are sampling now and should be available to the general industry in the next quarter.

Engineers can get a sample in one day; prototype buyers can get 1000 pieces in a week and the production buyer in Asia doesn't have to worry about scheduling 12 weeks in advance; they can place orders one to two weeks in advance, adds Fox. With the new product, Fox expects the XpressoO family will cover about 95% of market demand.

Mastropole says the company is always looking at new resonator technology that will allow the company to achieve better performance, including higher frequencies. One of the reasons is more competition from silicon players. 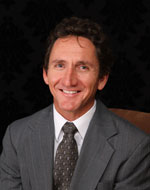 "We're getting continued pressure to build a product with better performance, which means lower phase noise, lower power consumption, smaller packaging, and more robust, and at the same time trying to control costs," says Anthony Mastropole, president, Crystek."We're seeing the ability of some companies to get very close to performance using a silicon die, which is a major cost saver, so we're keeping an eye on that one," he says.

Another new Crystek product is the CCSO-914 series of SAW clock oscillators, which is available in the 250 MHz to 1090 MHz range in a 9-mm x 14-mm package. These devices are becoming popular with analog-to-digital converter IC manufacturers. A smaller version, the CCS-575S, is available in a 5-mm x 7-mm package.

Despite the price erosion, frequency control manufacturers are expecting healthy growth in 2013 thanks to some of these high-reliability products, as long as the economy holds up. Several high-reliability sectors such as networking, cloud computing, server storage, and point-to-point microwave, which demand precision and ultra-precision devices, are expected to drive growth in the 10% to 20% range.

Mastropole says the company is on pace to grow 15% to just shy of 20 percent.

"Some of these new products are finding homes, and we're getting the word out on the street about what we have available as far as achieving some of these more stringent designs,” he says.

Fox expects to grow between 10% and 15% this year. Some of this growth can be attributed to its new parent company. After Fox was acquired by IDT last year, its sales force climbed from eight outside sales managers to 170 salespeople globally, it gained a new major global distributor, and added several IDT products to its portfolio.

"IDT has a 25% market share in silicon timing, and all that silicon timing requires a frequency control device to drive it, so it's a synergistic sell," says Fox.