Price Erosion for Analog ICs Will Ease in 2014

Supply of power management ICs, data converters, and other analog chips will be ample through next year. 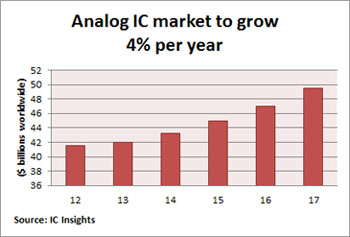 The analog IC market will grow just 1% in 2013 to $42 billion and then rise 3% to $43.2 billion in 2014, according to researcher IC Insights, Scottsdale, Ariz. Analog ICs include voltage regulators and reference devices, data converters, comparators, interface ICs, and application-specific analog ICs.

While revenue growth is modest, unit shipments are strong, especially for power management analog chips, the researcher says. Unit shipments will grow 14% in 2013.

“Business now is stable, but not growing rapidly,” says Todd Reimund, director of corporate marketing for Linear Technology, Milpitas, Calif. “Supply conditions have been very stable. Our lead times are close to four weeks for most products, and for some products we have two-week lead times,” he says.

Brian Matas, IC Insights vice president of research, notes that so far in 2013, demand has been robust for power management ICs as first-half shipments grew 18% compared to the first half of 2012. “A lot of that has to do with low-power, battery-operated applications, which are big drivers of the analog segment,” he says.

Slaymaker says many customers’ segments had cut inventory levels for analog in the second quarter. In the third quarter, customers replenished some of their analog inventories.

Although 2013 will not be a banner year for analog ICs, TI will increase its revenue share in the segment, according to Slaymaker.

Revenue growth will be modest in 2013 because of the decline in average prices despite strong unit growth demand. The average price of an analog chip will fall 11% and will decline another 3% in 2013, according to Matas.

One reason average prices are falling is that the two largest analog IC manufacturers—Texas Instruments and STMicroelectronics—have been moving more analog products to 200 mm and 300 mm wafers, according to Matas. Production on larger wafers means that suppliers get more chips per wafer, so cost is reduced.

Though demand has been strong for power management ICs, demand has been more mixed for other types of analog ICs. For instance, the amplifier chip segment has posted negative growth this year, but interface ICs are up 10% and data conversion devices have increased 2%, says Matas. 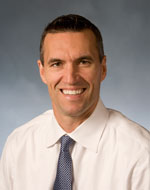 “Supply conditions have been very stable. Our lead times are close to four weeks for most products,” says Todd Reimund, director of corporate marketing for Linear Technology, Milpitas, Calif.Unit shipments of application-specific analog chips to the consumer electronics segment were down about 20% in the first half. However, demand for analog from the automotive segment was up 6%, and shipments to industrial customers increased by about 39%, reports IC Insights.

“We are growing faster in those markets than others,” explains Reimund. “We do business with thousands of customers across all major markets, but industrial and automotive markets have been our core focus over the last five or six years.”

He notes that for Linear’s fiscal year that ended in June, automotive was 17% of its business. For the first quarter of Linear’s 2014 fiscal year, the percentage grew to 19% of its bookings.

Reimund explains that both automotive and industrial will be growth segments for years to come. But how much those segments will drive the overall analog IC market remains to be seen.

Matas says analog industry revenue growth will average 4% per year and that growth rate may be the norm for years.

“It would take a pretty big boost in the market to get the analog market into double-digit growth,” he says. “That's happened a few times, but it's a rarity.”

He notes that the analog IC business is spread across many applications.

“There may be strong demand for one application, but that may not be the case for other segments," he says.

Double-digit growth will occur only if there is an “overall jump in the world global economy, which, the way things are going right now, I don't know how optimistic we can be about that," says Matas.