The "wall-wart" moniker that afflicts the myriad of offline AC-DC power-supply adapters that litter homes and offices around the globe is clearly not an endearing one.


The “wall-wart” moniker that afflicts the myriad of offline AC-DC power-supply adapters that litter homes and offices around the globe is clearly not an endearing one. Intended for equipment including the many computer peripherals that do not include their own AC-line supplies, wall-warts were originally linear designs that today’s efficiency considerations and initiatives such as Energy Star have relegated to history. Available wall-warts now employ isolated switch-mode supplies that vary from the ringing-choke-converter that typifies cheap first-generation far-Eastern products - which are almost certain to fail standby power efficiency specifications - to the mass of products that use the hard-switched flyback topology that suits low-power, low-cost offline supplies, or an adaptation such as quasi-resonant switching that softens EMC generation.

Of course, imaginative industrial design and quality plastics that house well-developed electronics from an offline converter IC specialist such as Power Integrations – for whom Hotenda distributes hundreds of parts – make it possible to build a good wall-wart. However, all too often, the low-cost driver that rules consumer-level products results in these devices being inelegant or just plain ugly. In addition, cost-cutting easily results in designs that are inefficient, prone to EMC issues, and offer limited service life. No realistic design approach can dispense with the tangle of trailing wires that wall-warts routinely create.

Transcending these issues, Power-over-Ethernet (PoE) offers a robust platform that rationalizes powering network nodes by delivering DC current over the twisted-pair cabling that interconnects the dominant network infrastructure built upon 10BASE-T, 100BASE-TX, and/or 1000BASE-T underpinnings. Originally conceived by PowerDsine back in 1998, this concept quickly gained the industry’s support and was first ratified by the IEEE-SA Standards Board in June 2003. The resulting IEEE 802.3af-2003 standard specifies that 15.4 W of power is available for each device at the minimum 44 VDC level. After accounting for worst-case interconnection losses, available power falls to a minimum of 12.95 W that nonetheless suits a vast range of equipment. Access terminals, digital cameras, security systems, smart sensors, and VoIP (voice-over Internet-protocol) phones are just some of PoE’s early applications.

Inevitably, market demand for more power led to the “PoE plus” specification that IEEE 802.3at-2009 defines. This update classifies power-sourcing equipment (PSE) as Type 1 or Type 2 according to its output power capability, and divides powered devices (PDs) into five groups that reflect each PD’s power demands. For PSEs, Type 1 equipment is compatible with IEEE 802.af-2003 and its 12.95 W-maximum per PD. The 350 mA per wire-pair restriction is necessary to accommodate the Cat-3 cabling that many legacy 10BASE-T installations use. However, to support the updated specification’s Type 2 PSEs, Cat-5E or better cabling is needed to allow up to 600 mA per wire pair. Considering interconnection losses, the new minimum 50 VDC output level raises a PD’s allowable consumption to 25.5 W. 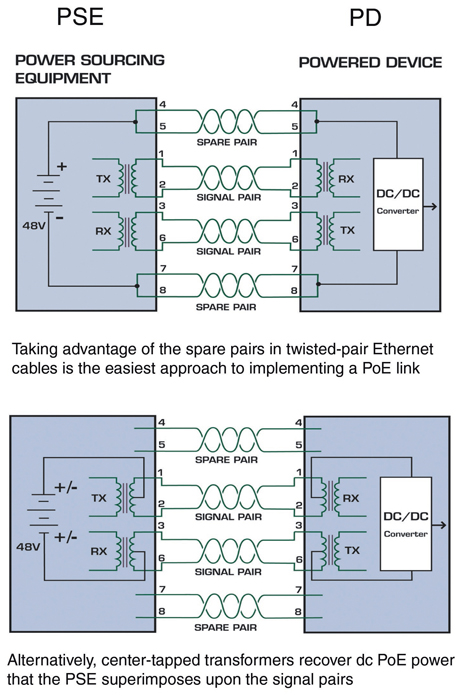 Figure 1 shows the wiring arrangements for 10BASE-T and 100BASE-TX over four twisted-pair cables - that is, Cat-5E or better - for the original and the updated specification. In addition to other equipment, PSE devices in particular often support both connection strategies. While it is perfectly feasible, the updated specification prohibits using all eight wires for power transmission. A key restriction in current levels is due to a cable’s resistance dissipating power that self-heating effects accentuate – relative to a single conductor that carries a given current, a two-wire bundle requires de-rating by around 0.91, falling to 0.72 for the four-wire 24 AWG bundle that’s actively carrying power in a Cat-5E PoE cable. Using all eight wires approximately halves the current rating for each of them, and it’s important to ensure that power dissipation does not compromise insulation or jacketing materials in ambient temperatures that may already be elevated.

With products such as its POE80U-560(G) “single-port power injector” - that is, mid-span device - vendors like Phihong ignore the specification’s eight-wire powering restriction to source as much as 80 W to suit a growing complement of high-power applications as diverse as PC workstations, satellite TV receivers, and security cameras. If unquestionable standards compliance is essential for your application, it is sensible to query any PSE vendor who claims more than 30 W per port. There is a growing sense that eight-wire powering is on the agenda for the standards makers within the foreseeable future. Meanwhile, if this ability enables an application that is not otherwise possible, it has to be worth your consideration.

A crucial measure of any standard’s success is how accessible it makes technically-sophisticated products to users who may have no concept of what is involved or care - or to put it another way that product designers will quickly recognize - how well a standard-compliant device obscures the complexities that lie under the hood. PoE excels here. It is technically challenging to understand PoE in its entirety, yet for systems administrators who wish to add PoE capability to existing or new networks, it is as easy as selecting a suitable PSE product to source and manage power for the PD devices within its network segment. The obvious approach is to select a PoE-capable switch that behaves as a normal switch so far as the network’s protocols are concerned, and the technology’s popularity ensures rich choice from commodity low-cost suppliers to high-end vendors.

PoE’s architecture also seamlessly supports mid-span PSEs that logically resemble pass-through devices that can also inject current into the data pairs and/or supply the spare pairs. Typically, a PoE-enabled mid-span appears immediately after a non-PoE enabled switch and two device types are specified – the 10BASE-T/100BASE-TX mid-span, that by its presence and regardless of power sourcing results in the link only being able to support these two protocols, and the 1000BASE-T mid-span that supports all three protocols. Apart from the ease of seamlessly adding PoE to an existing environment, mid-spans also offer the opportunity to evaluate PoE hardware without altering or compromising an established system.

Despite its apparent simplicity, equipment designers know PoE is a complex application. For instance, the electrical specifications that apply to power supplies are rigorous with parameters such as inrush current limiting, slew rate control, permissible transient levels, ripple and noise in a DC – 1 MHz bandwidth, and more to consider beyond routine voltage and current requirements that include the need for 1500 V isolation to meet IEC 60950-1’s safety requirements. An entire protocol manages and safeguards connections, with features such as a discovery process running at “power on” and anytime a user plugs a device into a PoE port. This prevents PSEs from damaging non-PoE compatible equipment, but overall the firmware development challenges are steep. Accordingly, it may be attractive to consider modular solutions, and there is no shortage as the 44 – 57 VDC for Type 1 and 50 – 57 VDC for Type 2 PSEs are similar to the telecom-standard -48 VDC specification that ETSI EN 300 132-2 formalizes.

For external DC-DC supplies, Phihong offers a range of mid-spans as well as splitters that extract DC power from a PoE link to supply non-PoE compatible devices that may be as unsophisticated as a lamp, yet potentially invaluable in PoE-based access-control and security applications. Similarly, Laird Technologies and SL Power Electronics offer splitters, while these three suppliers provide a wide range of AC-DC mid-spans. With 32 W output capability, the PW183RA from SL Power Electronics is a good example of a mid-span that targets 1000BASE-T networks (see Figure 3). 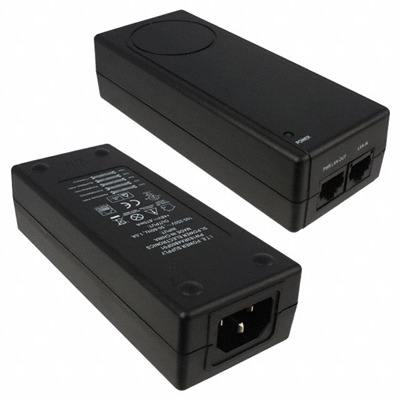 There are of course multiple choices for designing your own AC-DC or DC-DC PoE supply, and this may be the subject of a future article.