Energy-harvesting applications typically rely on scavenging trickles of energy from body heat, vibrations, or ambient RF on one hand or on extracting power from high-energy sources such as solar, wind, and the like. In these cases, access to a sustained energy source, whether low or high energy, can generally ensure continuous or near continuous operation of circuits.

Pulse harvesting, however, draws power from bursts of energy associated with a button push, sudden vibration, or other short-lived energy source. Outside of the pulse event itself, this approach leaves circuits with no additional power source beyond what excess energy they can store from pulse events. Despite these challenges, engineers have applied this approach to applications ranging from basic momentary pushbutton switches to complex wireless monitoring systems powered by the high-energy vibrations of railroad car wheels running across its tracks.

Pulse-energy harvesting holds promise for powering a wide range of applications as simple as wireless pushbutton switches to event loggers and more. In fact pulse-energy harvesting already lies at the heart of non-mechanical switches such as Schurter’s PSE series of piezo switches. With these devices, pressing a button deflects a piezoelectric disk, which creates a pulse of energy sufficient to power an electronic switch, which in turn momentarily closes the circuit across the switch’s terminals for the duration of the pulse (Figure 1). In this case, the period that the electronic-switch contact remains closed depends on the actuating speed, force, and duration.

Figure 1: Normally open pushbutton switches such as those in the Schurter PSE series rely on pulse of energy from a piezoelectric disk to momentarily close an electronic switch such as a MOSFET gate across its terminals. (Courtesy of Schurter)

When flexed or otherwise subject to mechanical strain, piezoelectric devices from manufacturers such as Mide Technology or Measurement Specialties can produce enough voltage output to power MOSFET or CMOS gates directly. For example, with the Measurement Specialties LDT0-028K, a 2 mm deflection is sufficient to generate about 7 V and greater bending can produce tens of volts (Figure 2). 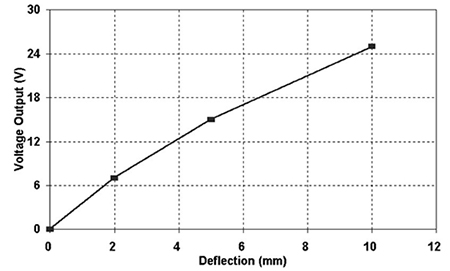 Unlike other types of transducers, piezoelectric devices produce an AC-output voltage when they are bent back and forth. Consequently, designers will typically pass output from a piezo device through a bridge rectifier typically created from small-signal Schottky diode arrays such as the Rohm Semiconductor RB521ZS8A30TE61.

Specialized energy-harvesting devices such as the Linear Technology LTC3588-1 integrate this voltage conditioning functionality into a single chip. The Linear LTC3588-1 combines a low-loss, full-wave bridge rectifier with a high-efficiency buck converter needed to harvest energy from piezoelectric transducers and deliver a suitably regulated output to application circuitry. Designed to interface directly with a piezoelectric device or other AC-power sources, the LTC3588-1 rectifies the voltage waveform and stores harvested energy in an external storage capacitor (Figure 3). 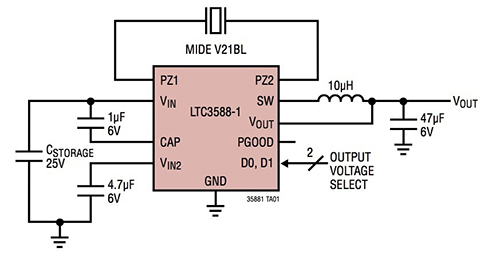 Depending on the nature of the pulse-energy source, applications powered by pulse-energy harvesting will likely have limited power available to provide extensive functionality beyond transmitting a data burst to some receiver. Indeed, engineers could be hard-pressed to implement more sophisticated wireless transmission protocols, requiring use of proprietary wireless methods with minimal communications overhead, resulting in shorter transmission bursts and correspondingly lower power requirements.

For applications with very limited power budgets, RF transmitter ICs such as the Linx Technologies TXM-xxx-LC offer a very low-power proprietary solution for wireless connectivity to a target device or host. Intended for short-range, low-power applications, such as garage door openers or remote controls, Linx offers its TXM-xxx-LC transmitter in 315 MHz, 418 MHz, and 433 MHz bands, consistent with standards for periodic-data transmission.

The Linx LC transmitters provide multiple data lines for connection to an MCU for creation of messages for transmission. On the other hand, the combination of the TXM-xxx-LC and the Linx LICAL-ENC-MS001 encoder IC offers a simple, low-power solution for transmitting a basic code to the target device. To provide a level of uniqueness and security in the transmitted code, the Linx LICAL-ENC-MS001 supplies an encoded bit-stream with 224 possible combinations to the Linx TXM transmitter (Figure 4). 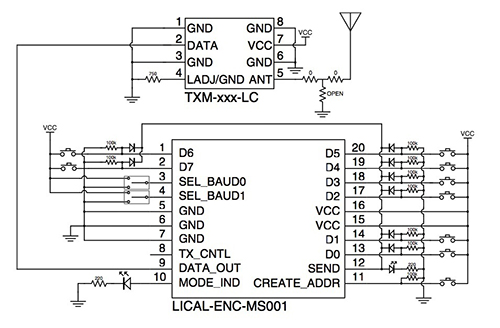 Applications powered by high-energy pulses — such as the pulsed vibrations of rails by train wheels — can exploit their relatively higher power in supporting more complex MCU-based applications such as railway monitors. Still, the need to ensure continuous operation between pulse events dictates use of very-low-power devices even in these situations. In these cases, designers can turn to low-power MCUs from the Silicon Laboratories Si106x family or a Texas Instruments CC2541 device.

The SiLabs Si106x and TI CC2541 each integrate an 8051-compatible MCU with on-chip RAM, Flash memory, multiple peripherals, and wireless transceiver. The Silicon Labs Si106x family features devices that support proprietary wireless protocols in the frequency range from 142 MHz to 1050 MHz, while the TI CC2541 is designed to support proprietary protocols or the standard Bluetooth Low-Energy protocol in the 2.4 GHz band.

Designed for low-power applications, these devices feature multiple low-power sleep states and very-short wakeup times. Nevertheless, in a pulse-harvesting application, employing these devices would typically require use of a local energy-storage device such as a rechargeable lithium-ion battery, thin-film battery, or supercapacitor to provide the trickle of power needed to support sleep states between energy-pulse events.

Piezoelectric devices are not the only solution for pulse-energy designs. In fact, electromagnetic induction techniques can generate significant output voltage in a variety of configurations, including linear and rotational. In fact, an electromagnetic transducer assembly forms the core of the available PTM 200 and PTM 210U wireless modules from EnOcean.

The EnOcean PTM 200/210U combines an energy transducer with a power converter, processor, and wireless radio in a single package (Figure 5). Here, the electrodynamic energy transducer is activated by the action of a separate pushbutton or rocker switch, positioned to push the transducer’s “energy bow” using tabs mounted on the outside of the module. When the energy bow is pushed a distance of only 1.8 mm, a sufficient pulse of power is supplied to enable the processor and radio to transmit a short RF message based on the settings of the contact nipples. The PTM 200 operates in the 868.3 MHz band, while the PTM 210U uses the 902 MHz band. 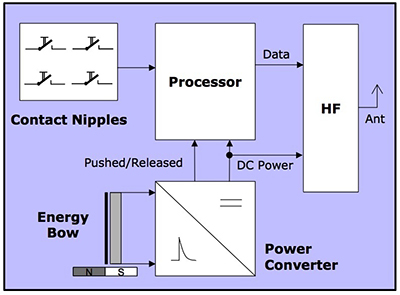 Figure 5: The EnOcean PTM 200/210U harvests pulse energy created by pushing an “energy bow” through a magnetic field to power an integrated processor and RF transmitter. (Courtesy of EnOcean)

Pulse-energy harvesting can generate sufficient power to activate low-power, short-duration applications such as wireless switches and data loggers. By capturing brief pulses of energy, these applications can operate indefinitely without batteries or external sources of power. For engineers, a wide array of available ICs and transducers offers a correspondingly diverse range of solutions for implementing wireless designs powered by pulse-energy harvesting.