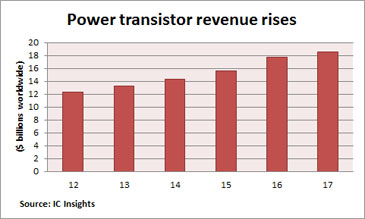 The power transistor market will post 8.5% annual growth through 2017 when the market will total $18.5 billion.Buyers can expect modest price declines and stable leadtimes for power transistors through the rest of the year as supply and demand remain in balance.

The good news for buyers is that prices will remain stable or decline slightly for the next several years despite growing power transistor demand.

Growth will be driven by a variety of applications, including high-end computing, media tablets, automotive, the smart grid and solar and wind energy systems.

Demand for power transistors is strong because they are "needed for almost every electronic application," says Ron Lineback, senior market research analyst for IC Insights.

Any new piece of electronics equipment such as a new version of an iPad or a new media tablet uses power transistors, he says.

“It is probably the only discrete that benefits from the emergence of new applications. Battery-powered systems use power transistors for battery charging as well as power management,” says Lineback.

He notes that power transistors are used in automotive systems such as power steering, cruise control systems and Bluetooth applications among others to make them more efficient. They are also used in hybrids and electric vehicles as well as wind and solar energy systems.

Power transistors are benefiting from the “effort to reduce electrical consumption of systems,” he says.

Good, but not stellar, growth

As a result of emerging and traditional applications, the power transistor market will post healthy revenue and unit growth for years, although growth will not be as strong as 2010 and 2011, adds Lineback.

“We saw a 44% increase in power transistor sales in 2010 as average prices increased 6%," he says. "That growth was unprecedented.”

Lineback says power transistor sales grew another 11% in 2011, but dropped 8% in 2012 as average prices fell 2% because of oversupply and weaker demand.

“But we are seeing a slowing in pricing decline overall” because there are lot of products being introduced for higher efficient power management applications and new technologies. He says such products have higher price tags. 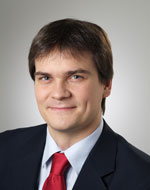 “If you see a surge in bookings, my personal opinion is that it is not necessarily a surge in demand,” says Stephane Ernoux, director of product marketing for MOSFETs for International Rectifier.Suppliers say they are expecting slow growth for 2013. So far this year demand has been flat.

“Demand has been there, but there's just too much capacity so prices have been suffering,” says Stephane Ernoux, director of Product Marketing for MOSFETs, for International Rectifier, headquartered in El Segundo, Calif.

He says demand has been stronger from some segments than others.

“Typically, high-end computers like servers, and cloud computing are doing fine” as are tablets, explains Ernoux. But demand for notebooks has been weak, which is bad news for IR and other suppliers because notebooks tend to use more power transistors such as MOSFETs than tablets.

He says demand from the industrial segment is okay, but there’s no great growth.

As a result of sluggish demand, suppliers have been “adapting capacity to the situation. It is seems like everyone is betting on slow growth rates now. That's where we are,” says Ernoux.

As a result of production cutbacks, power transistor inventories are lean, which makes it difficult for buyers to push suppliers for price concessions.

“If you put yourself in the purchaser's shoes, they of course want prices to drop. Last year all a buyer had to do was ask," says Ernoux. “This year it is different.” Suppliers are not giving price concessions, he says.

“However, if you see a surge in bookings, my personal opinion is that it is not necessarily a surge in demand. It could be a surge of purchasers anticipating what is going to happen,” he says. Buyers may order parts believing there may be an increase in demand for their companies’ end products. 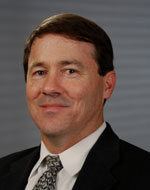 “We have seen a big interest in more integration, combining a power IC with a couple MOSFETs either as a monolithic device or as a system in a package,” says Keeley. “This is generally on the low-voltage DC-to-DC conversion across a lot of applications. We have seen a big uptick in this over the last six months” by the computing, networking and telecom segments.

He says integration saves board space and that a lot of computer, networking and telecom equipment have board space restrictions.

There is also a performance benefit with integration.

A longer term trend is the effort by suppliers to change power transistors from being silicon based to compound technologies such as gallium nitride and silicon carbide.

“Those are the two technologies that are being pursued by most leading suppliers for next-generation power transistors,” says Lineback. He adds that suppliers believe such compounds are necessary in order to improve efficiency in power handling of power transistors.

“It is a very small part of the business right now,” about 0.1% and will only be about 2% of power transistor sales by 2017, he says. “In 10 years or so the market maybe 10% in silicon carbide and gallium nitride.”