Buyers can expect declining prices for many power supplies.

Modest growth in demand, falling prices and a change in product mix will result in modest revenue growth for power supplies in 2013. However, demand will rise in 2014 and will be followed by several years of sales growth, according to power supply industry researcher Micro-Tech Consultants, based in Santa Rosa, Calif.

"I would not say there is high demand right now, but demand is moderately higher than last year,” says Mohan Mankikar, president of Micro-Tech Consultants. Power supply revenue will rise from $19.4 billion in 2012 to $19.6 billion in 2014 and reach $21.4 billion in 2017, Mankikar says.

Product mix change is affecting the power supply market, according to Mankikar.

The laptop adapter may cost $10-$15 while the power supply for the tablet is only about $3. That means less revenue for power supply manufacturers.

A decrease in U.S. military spending and sluggish demand from the industrial market is also affecting the power supply market, according to Mankikar. 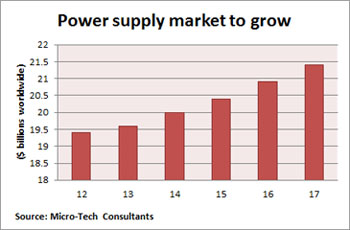 The power supply market will grow steadily
through 2017 when the global market will reach $21.4 billion. 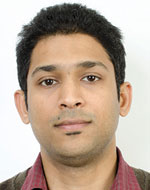 “We also do a lot of custom solutions for adapters in desktops,” says Arun Ananthampalayam, power marketing applications engineer.The good news for manufacturers is that demand is growing from the solid-state lighting, smart phones and media tablets segments. In addition, electric and hybrid cars and smart transportation systems show promise and may become more important drivers of the power supply business in several years.

The good news for buyers is that prices will likely continue to decline.

“Part of the growth is because we got a lot of design wins late last year” and those products went into production, Ananthampalayam says.

He adds that CUI is seeing an increase in demand for its open-frame AC to DC converters.

“We have a range of adapters tailored to the desktop market,” says Ananthampalayam. “We also do a lot of custom solutions for adapters in desktops."

Ananthampalayam says that although demand is strong for AC- to-DC converters, business is flat for DC-to-DC devices. He says demand will pick up across several segments including telecommunications, security systems, medical equipment and LED lighting.

“We are starting to see a lot of demand in the North American market, specifically for these market segments,” says Ananthampalayam. “Globally, demand has picked up for the solid-state lighting space. Asia is moving into its leadership role in the world economy and energy conservation is their top on their agenda right now. Asia and Europe are leading the way in adopting of LED lighting technology. We are starting to see traction in the U.S., too.” 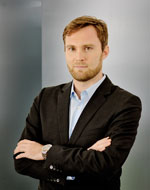 “There have been no big ups or downs, but we have seen strong growth in the medical markets, the smart grid markets and in Europe, where are seeing development of new markets,” he says. RECOM is supplying “low-power high-efficiency parts for railway and other industries. We expect to continue to see growth in the smart grid, energy efficiency and LED lighting segments which have high growth potential.”

Wolf adds that RECOM is experiencing strong growth in the low-power AC/DC market.

“We have some AC/DC modules below 10 watt, especially 1-4 watts, which are designed into a diverse range of applications. Our customers are very creative and coming from fields we had not previously been focusing on,” he says.

Wolf adds that RECOM’s North American business grew over 30% in the first half of the year. The catalog distributors are making the difference, he says.

RECOM’s customer account base is growing quickly, and “we are winning more sockets in more applications. I think the year is going to end on a strong note and be a good year. The atmosphere is pretty positive,” according to Wolf.