Density has become a crucial factor in the design of computer servers. Moore’s Law has made it possible to put multiple high-performance cores onto a single system-on-chip (SoC) device together with support logic. High-density field-programmable gate arrays (FPGAs) provide further possibilities for application acceleration and integration.

The result is multiple high-performance SoC components deployed on each logic board within a system, to provide massive computational potential. However, the changes in process technology that drove higher integration have had knock-on effects on power distribution within servers.

Processor and FPGA design teams have reduced supply voltages down to 1 V or less for the core logic as the use of higher voltages would result in damage to the high-speed transistors. Voltages in the 1.8 V to 3 V range are only used for I/O to memory and peripherals. This has led to the situation where higher current levels need to be delivered to processors and FPGAs than was the case a decade ago. This trend is ruling out the use of traditional power-conversion architectures. The high current demand would ordinarily point to the use of larger passive components able to handle the high loads and stresses. However, such larger components go against the trend to denser servers, reducing the amount of available PCB space for power-conversion circuitry. As a result, manufacturers of power converters suitable for servers have changed their approach to design.

One trend has been an increase in switching frequency to reduce peak current demand, which helps to keep the size of passive components such as capacitors to a minimum, although careful design techniques are needed to reduce the impact of switching losses.

Today, the most efficient way to build a server is to employ distributed power architecture in which one or more front-end PSUs supply current to a tree of intermediate and point-of-load (POL) DC/DC converters. The distribution voltage is higher than that required by the processors and FPGAs to minimize cabling losses. A key decision to be made is the level at which the distribution voltage needs to be set.

The reduction of POL supply voltage to 1 V or less has led to the need for converter designers to deal with large input/output ratios, even with the commonly used distribution voltage of 12 V. To support lower losses across the rack, manufacturers are looking at two-stage conversion, using a high voltage such as 24 V, 36 V or even the 48 V commonly used in telecom switches, converting down to 12 V or 5 V on the board, with the final POL converter providing the sub-1 V needed for core logic. However, by supporting larger ratios, some POL-oriented products can support higher intermediate voltages without requiring the secondary conversion stage. 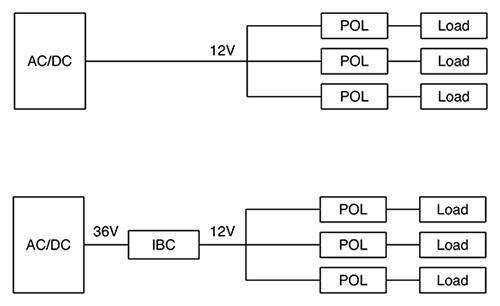 The Picor PI33XX Cool-Power buck regulator series made by Vicor uses a high-performance zero-voltage switching (ZVS) topology to provide power efficiency up to 98 percent.  The use of a ZVS topology enables high-frequency operation that minimizes the switching losses associated with conventional buck regulators that use hard-switching topologies. The high switching frequency of the PI33XX series also reduces the size of the external filtering components, improving power density while enabling fast dynamic response to line and load transients. The PI33XX buck regulators can convert input supplies ranging from 8 V to 36 V to output voltages from 1 V to 16 V and output current up to 10 A for power delivery up to 120 W.

Products in the PI33XX series are highly integrated with control circuitry, power semiconductors and support components in a 10 x 1 x 2.56 mm system-in-package (SiP). Power delivery can be further increased by interleaving up to six PI33XX buck regulators using single-wire current sharing without additional components. The PI33XX series buck regulators require only an external inductor and minimal ceramic capacitors for input and output filtering to form a complete high-performance regulator. No frequency compensation, parametric settings or incremental external components are required. A wide operating temperature range of -40°C to 125°C allows for use in almost any environment. 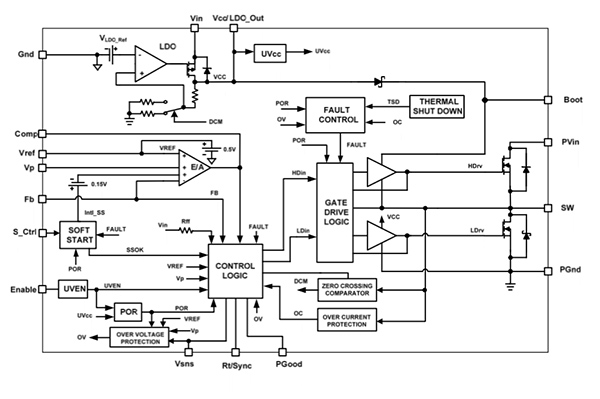 Figure 2: Devices such as the Picor Cool-Power demonstrate high integration.

To provide high efficiency in a small package with the minimum of output capacitors, the Gen3 SupIRBuck family from International Rectifier employs a proprietary modulator scheme that enables jitter- and noise-free operation when high frequency and high-bandwidth operation is needed to provide good transient response. Products such as the 12 A IR3894 can take an input voltage anywhere from 1 V to 21 V and deliver sub-1 V output, down to 0.5 V to support the latest SoCs. The switching frequency is programmable all the way from 300 kHz to 1.5 MHz for high flexibility. The IR3894 is packaged in a low-profile 5 x 6 mm QFN. Like other products in the family, low profile and good thermal performance to allow use without a heatsink means that the device can be mounted on the backside of the PCB, providing more space for processors and support logic on the front side. For members of the SupIRBuck family overall, IR claims space savings of 20 percent in terms of PCB space compared to alternative integrated solutions and 60 percent compared to discrete solutions.

Suitable for use with a 5 V or 12 V intermediate, the Enpirion EN2392QI from Altera is one of a series of power converters intended for use with high-density FPGAs. The Enpirion architecture uses high-speed MOSFET technology to support a megahertz switching frequency. The EN2392QI integrates the controller, power MOSFETs, compensation network and inductor in an 11 mm x 10 mm package, for a total solution area of 235 mm2 once external components are included, and provides an efficiency that exceeds 90 percent across a wide load range – from 3 A to more than 8 A.

There can be a limit to how far switching frequency can increase before switching losses begin to dominate the overall power losses of the converter. Beyond a critical frequency, efficiency will begin to decline. The multiphase or polyphase topology provides a way around this problem. In this architecture, the converter separates the circuitry into two or more phases. Each phase is responsible for delivering a fraction of the total power needed by the load. Adding phases makes it possible to deliver on the promise of high-frequency operation without reducing the actual switching period. The effective operating frequency is effectively the fundamental switching frequency multiplied by the number of phases. The overall effect is to improve transient response and cut ripple without incurring the problems of running at a higher fundamental frequency.

By wiring together converters, as with the Picor Cool-Power devices, it is possible to use multiphase operation to increase overall power levels at high switching speeds. An example of a multiphase-compatible device is the Linear Technology LTM4630, a dual-output standalone non-isolated switching mode DC/DC power supply. It can provide two 18 A outputs with relatively few external input and output capacitors and setup components.

This module provides precisely regulated output voltages programmable via external resistors from 0.6 VDC to 1.8 VDC over 4.5 V to 15 V input voltages, suiting it to server designs that use a two-stage intermediate bus architecture. The LTM4630 has dual integrated constant-frequency current mode regulators and built-in power MOSFET devices optimized to switch in the 500 kHz frequency range.

By connecting several pins between devices and programming a phase-control pin to different levels for each, up to twelve phases across six devices can be cascaded to run simultaneously with respect to each other. Because server processors will often power down for light workloads, high efficiency can be achieved under these conditions with selectable burst mode operation or pulse-skipping operation using a control pin. 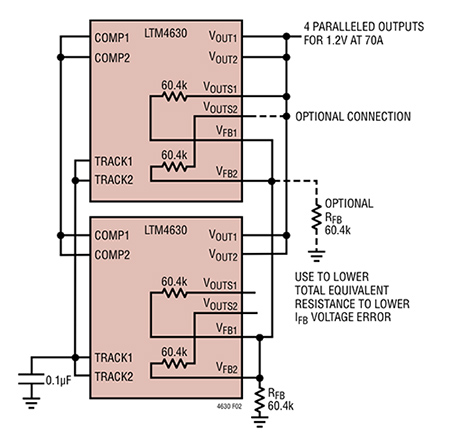 By focusing on advanced control and novel SIP techniques, power converter designers are helping to increase the density of computer servers and allow more performance to be packed into a small space without sacrificing efficiency. Further improvements in MOSFET technology and control algorithms are likely to see further efficiency and thermal improvements.