Systems for military, aerospace, and even industrial applications can expose components to a range of harsh conditions, including shock and vibration, temperature extremes, repetitive thermal cycling, electronic noise, contamination, and more.

Systems for military, aerospace, and even industrial applications can expose components to a range of harsh conditions, including shock and vibration, temperature extremes, repetitive thermal cycling, electronic noise, contamination, and more. Developing power products for these environments is a challenge, and design teams frequently discover it is much more efficient to focus their efforts on a project’s core objectives, relying on commercial modules for their power needs. To achieve the required performance, it’s essential to understand how power supplies address the specific challenges posed by harsh environments, and to properly specify the components.

Whether the application is in a military ground vehicle traversing harsh terrain, an aircraft exposed to turbulence, or an ocean-going ship at any time, shock, and vibration are likely to be part of the list of operating parameters. Particularly in the case of discrete components mounted on a PCB, the effects can cause premature failure if not addressed. The larger the component, the greater its inertia, which increases the chance that it will shift or break loose of its mount. One way to avoid this is to pot the module, locking the components into place. It's an effective solution, although it adds weight, making it inappropriate for portable devices. That can be mitigated by localizing the potting to discrete components rather than the entire board. If a potted component subsequently fails, however, replacement isn’t an option—the potting material locks it in place, and the board has to be discarded. In the case of a space application, for which the primary focus is on performance and survival through launch conditions, this drawback may not matter.

In accessible equipment with long designated lifecycles or portable applications in which weight is a concern, chip-level integration may provide better protection. The family of synchronous buck power modules from National Semiconductor, for example, integrates external components such as inductors to minimize vulnerability. Designed for moderate-power applications, the ruggedized modules are tested to MIL-STD-883, surviving a drop acceleration of 1,500 G, and a four-minute vibration test with accelerations of 20 G.¹ Exact specifications vary, but the product line can handle up to 42 V of input, stepping it down to a few volts and delivering output currents of up to 4 A. The devices also feature a lead frame and a die-attached pad on the bottom to facilitate heat transfer for extended-temperature operation.

Which brings us to the second major challenge of harsh environments: thermal management. One of the most punishing things you can do to an electronic component is expose it to heat. For every 10°C rise above room temperature, the mean time between failure (MTBF) drops by half. Part of the problem is that electronic components, especially in power modules, generate heat during operation.

Consider, for instance, the dissipation vs. output current curves for National’s LMC14202 EXT module showing the increase in heat generated as a module is driven harder (Figure 1). 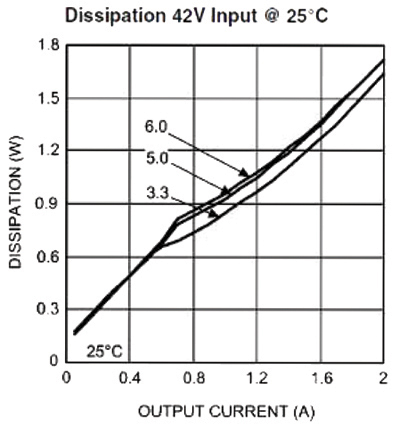 Figure 1: Curves of dissipation as a function of output current for varying output voltage on the LMC14202 EXT. (Courtesy: National Semiconductor Corp.)

The top chart of Figure 2 shows how performance of the Emerson Network Power LCC250-12U power supply module is derated at higher currents. A similar set of curves for the convectively cooled version (bottom chart) shows derating for airflow at varying linear feet per minute (LFM).

All of these factors make thermal management an important focus in these applications. Convective cooling provides one option. Approaches range from air cooling to fans, although fans introduce additional points of failure, not to mention adding size, weight, and cost. The LCC250 power supplies are a conduction cooled series delivering full useable power at high temperatures. Housed in a fully-sealed enclosure the supplies offer protection against the ingress of dust and water. There is a choice of mounting types; conduction-cooling and convection-cooling. All models have a small 7 inch by 4 inch (178 mm by 101 mm) footprint; the conduction-cooled versions have a height of just 1.1 inch (28 mm), while the convection-cooled versions feature an integral low profile heat sink which raises their overall height to 1.5 inch (38 mm).

Electromagnetic interference (EMI) represents a source of ongoing concern in many use cases. Factory floors tend to be awash in electronic noise. Devices need to be properly shielded to prevent interaction with other sources. In the case of military and avionics applications, noise emission presents a greater concern. The issue needs to be addressed starting from the silicon on up. Conductors act as antennas. Integrating components on chip and minimizing the length of interconnects helps reduce the effect. If the PCB incorporates copper, the board itself can also generate noise. Minimizing the size of the board reduces the effects, but the trade-off is reduced heat dissipation capability, both as a result of reduced area and because components are packed more tightly together with less opportunity for convective cooling. In this case it's a matter of trade-offs, driven by whether noise immunity or lifetime is more important.

As if all of this weren't challenging enough, contamination presents an ever present issue. In industrial environments, sources can range from hydraulic greases and caustic chemicals to wooden dust generated by processing paper, cardboard, cloth, and wood. Shipboard and dockside systems are subjected to the humidity and corrosive atmosphere of the self-water environment, while systems to land must survive fine, windborne dust. Packaging technology, including potting, can provide protection. IP-rated housings can also assist.

The commercial market presents a variety of off-the-shelf power modules designed specifically for harsh environments. By carefully building your specs, you can select a product that will address the conditions your application presents. It is important to avoid the temptation to economize by selecting a module that just meets requirements, however. Because of the stresses and variability typically presented by harsh environments, it's important to allow some headroom. Especially for systems designed for extended lifetimes, spending a bit more money to over-rate the power module may ultimately save money down the road in terms of replacement parts and maintenance time.