A look at rechargeable lithium batteries becoming more viable for use in critical military applications as power densities increased and price points reduced.


The design of the manpack for the soldier on the battlefield moves apace as digital technology advances. On one hand, the forces need efficient communications and instant access to strategic information. On the other, equipment needs to survive extreme conditions, yet remain portable with no compromise on performance. 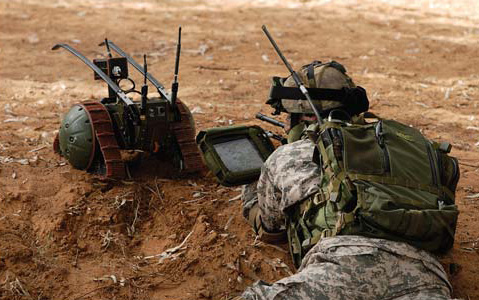 Figure 1: For the modern soldier on the digital battlefield, reliable electronics are as important as effective weapons.

Lithium batteries have long been recognized as the optimum power source for portable equipment on the military battlefield. Although specialized, military-grade primary lithium batteries are not readily available for commercial use, there are some commercial grade units that are specified to meet temperature extremes, and which could be specified for similarly rugged applications. The TL range from Tadiran Batteries is one example.

However, rechargeable lithium batteries are now becoming more viable as power densities have increased and costs reduced. A key advantage is that they can be recharged from a variety of power sources, including portable and wearable solar panels and other energy-harvesting sources.

The range of portable electronic equipment now available to military personnel deployed in the battlefield is vast, as technologies such as GPS, advanced sensors, and wireless networking have progressed. Increasingly, dedicated military-grade wearable computing equipment is drawing on commercial technology. Despite considerable efforts made in the development of rugged portable computers for use by soldiers, both in backpacks and in field headquarters, the shear functional performance of today’s commercial smartphones has enormous appeal, although is yet to be widely deployed. Meanwhile, maintaining power to the soldier’s backpack full of electronic equipment requires careful design and consideration.

Low-power operation and the ability to recharge on the move are key considerations. Of all battery technologies, lithium has proven itself to be small and light enough for manpack applications. They discharge sufficiently high levels of power quickly when needed by high-performance military systems. Additionally, they can maintain their charge levels over long periods of storage or dormant activity. More importantly, they are rugged and operate at extreme temperatures while they neither explode nor ignite when damaged, such as by a bullet.

Until recently, rechargeable batteries were not considered suitable for many military systems, primarily because they did not have the power density, making battery packs larger and heavier. Cost was also a factor. However, the performance of rechargeable devices has improved, and they are proving particularly useful in the increasing number of portable military electronic systems now deployed, such as night vision equipment, emergency locator beacons and GPS-based trackers, as well as portable tactical computers and communications systems. Their shorter operating life, limited cycle time, and higher self-discharge rate over non-rechargeable batteries, can still be considered disadvantageous in some applications, but the technology in these respects is improving too. Field recharge functionality from a variety of power sources, such as solar panels, mitigates some of the downside.

A leading supplier of lithium batteries specializing in military and other high-performance applications is Tadiran Batteries. The company offers multiple families of primary and rechargeable cells in a range of form-factors and ratings. Built on a lithium thionyl chloride (Li/SOCI2) chemistry, the batteries typically offer high energy density, high power, low passivation, very-low self-discharge rates and, importantly, reliable operation over an extended temperature range. The bobbin-type construction versions can withstand broad fluctuations in pressure and shock, as well as temperature. Service life is up to 15 to 25 years, even for rechargeables.

This technology is claimed to be ideal for applications requiring low continuous current and/or moderate pulse currents. They are finding widespread application in remote monitoring applications, in challenging environmental conditions and medical devices, as well as military equipment.

Although the specialist primary (TLM) and rechargeable (TLI) military cells are generally a special order, the commercially available TLH range delivers Tadiran’s proven technology in the extended temperature range from -55 to 125°C. The TLH5903S is a standard AA cell rated at 3.6 V with a capacity of 2 Ah. Maximum recommended continuous current is 100 mA and maximum pulse current capability is 200 mA.

It remains to be seen exactly how widely used in military applications rechargeable lithium batteries will become. For powering larger systems, they have the potential to deliver much higher energy densities than traditional lead-acid or NiCad batteries. However, they will need to meet the requirements of an extended temperature range, not only for storage, but also for charging. Tadiran has set the bar high with its 3.6 V AA TLI cells that operate from -40 to 85°C, deliver high current pulses to 5 A, and with 5,000 life cycles, equivalent to a 20 year operating life. Importantly, they can be used with solar and other energy-harvesting devices for recharging.

In the commercial world, solar-powered chargers for battery-powered products are becoming more common, leading to an increased interest in power and battery management circuitry. In military applications, battery and power management is critical, partly because, unlike in many commercial applications, the batteries are often required to deliver specific power levels for short periods of time rather than a steady supply of power. Monitoring the charging and discharging of lithium batteries can require careful consideration bearing in mind the need for balance between size, weight, power capacity (how much power), and energy capacity (how long does it last).

Military electronic systems providers are increasingly turning to sophisticated power managers designed to deliver the required power to any load from a variety of sources. Such devices need to manage energy scavenging, often implementing maximum peak power tracking, and then power conversion to provide constant, stable energy to applications such as radios and computers. The ability to monitor and manage the input and output of multiple power sources is crucial. These power managers also act as intelligent energy storage controllers, directing solar energy to battery charging for later use, or switching to alternative power sources if there is insufficient energy in the solar-based system.

At the heart of these power managers is DC/DC converter technology, often making use of synchronous rectification techniques to reduce losses. With unknown input and output voltages, a buck-boost topology is a favorite, which can deliver an overall conversion efficiency of 95% or better. Small size and low power is just as important for the power management circuitry, especially when incorporated into hand-portable or soldier-wearable devices.

Linear Technology offers the LTC3127, a 1 A buck-boost DC/DC converter that delivers up to 1 A of output current to a regulated output voltage with inputs above, below, or equal to the output. With 96% efficient synchronous rectification, the device is ideal for charging systems incorporating supercapacitors or batteries that are powered from sources with hard limits on output current.

The LTC3127 features an input range of 1.8 V to 5.5 V and an output range of 1.8 V to 5.25 V, compatible with USB and single-cell lithium, NiMH, or other battery applications. Figure 2 below shows a typical application with a lithium-ion battery limited to 500 mA maximum input current. The device is compact, contained in a ten-lead DFN or thermally-enhanced twelve-lead MSOP. It is also low power, requiring only 35 µA of quiescent current, even in burst mode, and shutdown current is less than 1 µA. 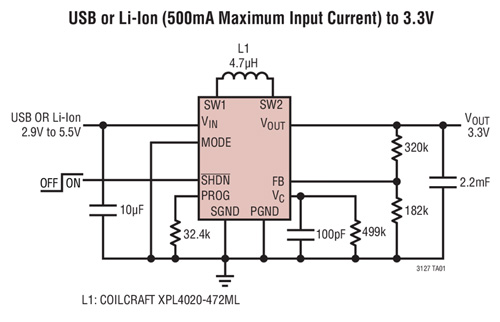 Another device from Linear that is specifically recommended for solar-powered battery/supercapacitor chargers is the LTC3105 high-efficiency step-up DC/DC converter. Operating from input voltages as low as 225 mV, the device features a 250 mV start-up capability, and importantly, an integrated maximum power point controller (MPPC), ideal for alternative power sources such as solar and photovoltaic cells. The user-programmable MPPC set point maximizes the energy that can be extracted from the power source.

Additional features that are particularly useful for this type of application include an auxiliary-powered 6 mA LDO, providing a regulated rail for external microcontrollers and sensors while the main output is charging, and burst mode operation with an IQ of just 24 µA. With an operating temperature range of -40 to 85°C, and low voltage start-up capability, the circuit is cited as being able to provide enough power to keep a 400 mAh lithium-ion battery fully charged in most weather conditions.

A useful Application Note¹ describing a solar-powered lithium-ion battery charger circuit based on the LTC3105 is available.

Meanwhile, Texas Instruments offers buck-boost voltage converters suitable for use with unregulated input voltages, such as would be found in battery sources including lithium ion. The REG71050 is a switched capacitor voltage converter accepting input voltages varying from below to above the output voltage, while ensuring the output remains in regulation. It is claimed to work equally well for step-up or step-down applications, with automatic mode switching within the device. There is no need for an inductor, as the device provides low EMI DC/DC conversion with automatic lowering of output voltage ripple and input current ripple. The high switching frequency (1 MHz) allows for the use of small surface-mount capacitors.

TI promotes a similar approach to battery charge control, optimized for use with solar power using its BQ24650. This highly-integrated switch-mode battery charge controller provides input voltage regulation via its MPPC capability, which reduces charge current when input falls below a programmed level. When the input is powered by a solar panel, the input regulation loop lowers the charge current so that the solar panel can provide maximum power output.

Incorporating a constant frequency, a synchronous PWM controller provides high accuracy current and voltage regulation, charge preconditioning, charge termination and, usefully, charge status outputs for monitoring. The device is set to automatically restart the charge cycle if the battery voltage falls below an internal threshold, and enters a low quiescent current (<15 µA) sleep mode when the input voltage falls below the battery voltage.

Batteries from 2.1 V to 26 V with voltage feedback are supported, including lithium ion/polymer and LiFePO4. The miniature, low-power device is suitable for a range of solar-powered battery charging applications, including portable, handheld devices and for use in remote monitoring stations. 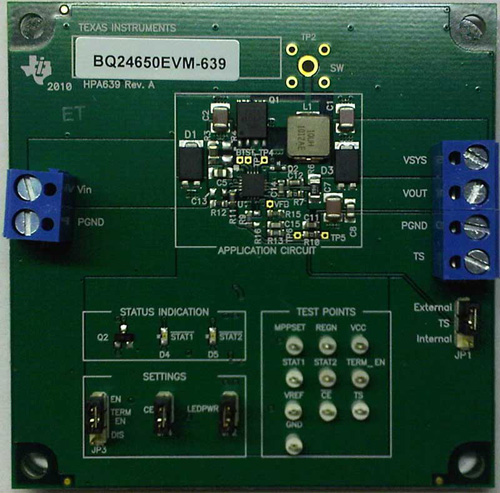 Designers might be interested in trying out the BQ24650 using TI’s evaluation board, BQ24650 EVM-639, which includes the controller device, programmable resistor, LED indicators for charge status, test points and easy probe hook up, and jumpers. A descriptive user guide² is also available.