A passive network of inductors and capacitors can provide much of the power supply filtering required for an Industrial IoT firewall system.

To ensure they remain secure, many Internet of Things (IoT) applications will require firewalls and gateways to protect the most sensitive equipment. Although the end nodes will be battery-powered, these firewalls will be line-powered for the most part to provide them with the energy needed to run the necessary security checks. This introduces the need to filter the power lines against interference.

To deal with the growing range of threats that can be launched against industrial networks, the data-filtering systems used by firewalls are becoming increasingly sophisticated. Designers are deploying not just embedded processors but field-programmable gate arrays (FPGAs) to perform deep packet inspection tasks that are able to weed out suspect or malicious frames. These sophisticated devices can have multiple power rails feeding into them to supply energy separately to the core logic array and I/O cells, as well as clock and memory-interface channels.

Power supply coupled noise can adversely affect the phase locked loops (PLLs) used to generate reliable clock pulses, for both on-chip circuits and serial interfaces, as well as the operation of logic. Because voltages are now at 1 V or below, there is very little tolerance for changes, with the result that circuits can prove to be highly sensitive to ripple and other forms of power-supply noise.

Power integrity is one of the key requirements for these designs, as interruptions to processing could slow down network performance while the system recovers. As the firewalls will often be situated outside data centers where filtered power is not readily available, and may be in close proximity to industrial equipment, they will need to incorporate their own power-supply noise rejection and filtering hardware.

There are two stages at which filtering may be needed in a design for an industrial IoT firewall. One is at the power supply input, to try to eliminate noise conducted along power cables. The other is after the power supply to deal with noise coupled into the main circuitry or arising as the result of digital switching within the system. In both cases, a passive network of inductors and capacitors can provide much of the filtering required.

One option for a power-supply input filter is an undamped LC filter. However, this has the effect of potentially increasing interference at the corner frequency of the circuit, which is related to the square root of the total inductance and capacitance. As a result, designs typically use series or parallel damping to curb the peak around the cutoff frequency of the filter.

On the output side of the power supply, bypass capacitors are frequently used to contain the changes in current flow caused by switching noise and other interferers. The capacitor sits between the power supply and ground. In addition to the bypass capacitor, inductors such as ferrite beads can be inserted serially to form a common-mode noise suppression filter. Ferrites can work better in this context as they offer lower impedance than inductors, which may be used in the output circuitry of the DC/DC converters themselves. There are a number of considerations that need to be taken into account during inductor and capacitor selection.

Multilayer ceramic capacitors (MLCC) are widely used as capacitors in power-supply noise filtering applications because they can handle wide frequency ranges. However, these properties are affected by their intrinsic resistance (ESR) and inductance (ESL), resulting in less than ideal characteristics when handling high-frequency signals. Because of these elements, capacitor impedance indicates a V-shaped frequency curve (Figure 1) where the impedance of the capacitor, mostly due to the series resistance, falls almost linearly towards a resonant frequency before rising again, due to the series inductance. 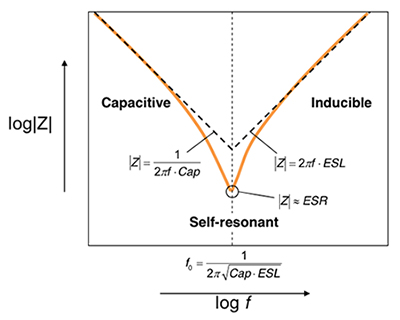 Figure 1: Impedance characteristics of a capacitor by frequency.

The curve on the left-hand side can be tuned by choosing an appropriate capacitance. Generally, the lower the impedance, the better the capacitor’s noise suppression abilities. Higher capacitances will generally be low on the left-hand side of the V, but have little effect on the inductance-controlled side. As a result, it is important to choose a capacitor with low ESL as well as choosing a way of mounting the capacitor on the PCB, to ensure low inductance there – which may be achieved using short and wide traces. A 1 nH increase in inductance can reduce noise suppression by as much as 10 dB.

Low-inductance capacitors suitable for suppression alter the internal electrode configuration to alter the current path through the device. One type is the length width (LW) reverse capacitor, such as the Murata Electronics LLL series family, which has a wide and short electrode structure. Another approach is the multi-terminal capacitor design, with each electrode reversing the polarity relative to its neighbors. Using such a structure, the mutual inductance between currents flowing in opposite directions cancel out. Whereas a conventional MLCC might have an inductance of 0.5 nH, an LW reverse can reduce that to 0.2 nH and an eight-terminal even further to 0.1 nH. The Murata LLA series provides suitable eight-terminal capacitors, as does the AVX IDC family.

Another form of low-ESL capacitor is the three-terminal design, which is a type of feed-through capacitor designed for its broad frequency-range characteristics. It is a capacitor with input, output and ground electrodes, forming a T-shaped path in a circuit. The design reduces the inductance of the bypass direction significantly, often less than a thirtieth of that of a conventional MLCC.

Similar to capacitors, inductors have frequency-related properties, albeit inverted relative to the capacitor case, resulting in a delta shape rather than a V. The peak is again at the self-resonant frequency of the inductor. The rising left-hand edge of the delta is due to inductance and the falling right-hand side is controlled mainly by effective parallel capacitance (EPC). The impedance at the self-resonant point is controlled by effective parallel resistance (EPR).

In order to realize high impedance at high frequency, an inductor with low EPC is generally obtained by minimizing capacitance in the winding wires. However, a ferrite bead has a broader peak, due to frequency-dependent resistance, than the sharp resonant peak of an inductor, which suits it to broadband noise rejection.

The basic structure of a ferrite bead consists of a cylindrical ferrite with a lead passing through it, although there are forms that use a multilayer structure with a spiral connection formed internally. A magnetic flux is formed inside ferrite in response to the current going through the lead, providing inductance and impedance properties that are due to the magnetic permeability of the ferrite.

The inductance varies depending on the frequency characteristics of ferrite’s magnetic permeability, and generally is not fixed. The impedance is strongly influenced by the magnetic loss of the ferrite. As a result, the characteristics of ferrite beads are usually expressed in terms of the changes in impedance due to frequency, as opposed to inductance. At high frequencies, much of the energy is dissipated through heat, but the ferrite has very low resistance close to DC, so it will not greatly affect the output from the DC/DC converter.

The ferrite bead should be selected so that its impedance is sufficiently high at the switching frequency of the DC/DC converter and preferably its harmonics, as well to ensure effective blocking of the regulator’s switching noise. Some manufacturers of DC/DC converters recommend the use of shielded ferrite core inductors because of their low core losses. 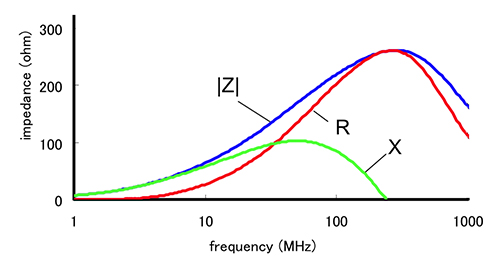 Figure 3: Impedance response of a ferrite against frequency and the impact of component resistance (R) and component reactance (X).

One way to employ ferrites and capacitor filters in combination is to use an LC filter. This eases the job of matching the two to ensure that insertion losses due to the capacitor falling too low provide effective suppression across the frequency range of interest. A typical LC filter product line is the NFE series from Murata or the ACF family from TDK.

Noise can adversely affect sensitive high-performance digital processors as much as it can interfere with analog circuitry. Designing in filtering circuits can ensure that the system performs reliably, particularly in EMI-prone conditions such as the industrial environment.