Energy harvesting power converters and controllers necessary for remote sensors connected to the Internet of things.


Environmental energy harvesting is a possible source of power for Internet of Things (IoT) sensor nodes but needs careful management. Unless harvesters based on solar or thermal technology, for example, are designed to be compatible with conventional circuits, DC/DC converters need to be optimized for low-voltage inputs.

Sensor nodes for the Internet of Things often need to placed well away from a reliable power source but operate for many years. Although long storage-life batteries provide one option for powering these devices, an increasingly viable alternative is the use of environmental energy harvesting, using sources such as light, vibration and temperature differentials.

The key issue with energy-harvesting designs is that the source of power is often highly variable as well as unpredictable. For the electronics to function, the power provided by the harvesting elements needs to be regulated using one or more power conversion stages.

In most cases, the peak energy available for harvesting does not coincide with the peak demand of the system, which will entail storing excess energy within the system, using a component such as a supercapacitor, so that it is ready to be applied when needed. Typically, harvesting will allow the system to accumulate energy over a long period of time, during which most of the system itself will be asleep to cut its power demand. When the system wakes up to take readings and send recorded data over a network, it taps into this reservoir of accumulated energy. 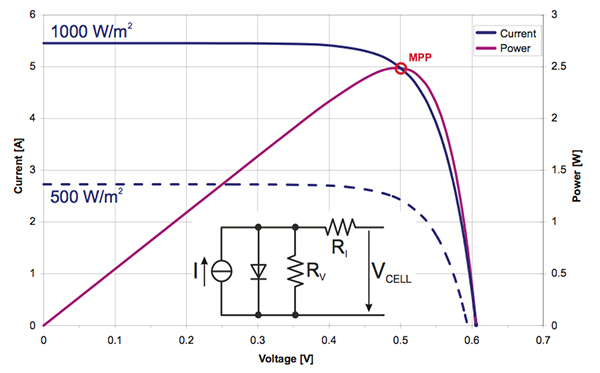 Figure 1: The I-V curve for a typical solar cell and likely harvested current for two levels of irradiation (Courtesy of Texas Instruments)

While the system is sleeping, the power consumption of this section needs to be kept as low as possible to avoid wasting precious energy. This represents a stringent demand not just on the quiescent current of the DC/DC converter used to supply the processing electronics, but also on its ability to supply power as the processor and associated circuitry wakes up.

The design of the DC/DC converter faces a further challenge. The harvested energy is normally in a form that is difficult to use. Although piezoelectric and electrostatic harvesters typically operate at a relatively high voltage, the voltages generated by most energy-capture technologies are significantly below 1 V. For example, small photovoltaic cells may operate with voltages below 0.5 V. To be able to deal with such low voltages, the DC/DC converter needs to offer the ability to not just provide step-up regulation but start up from voltages that are significantly below those encountered by mainstream designs aimed at battery-powered systems.

A further consideration is that of maximum power point (MPP) tracking. Typically, the cells in a photovoltaic module will generate a high voltage when generating very little power. As light levels rise, the voltage will drop slightly, but current will increase dramatically until it approaches its peak level. Temperature also plays a role. As the module heats up, the output voltage of the module will fall, which will reduce its overall energy output. As a result, even during periods of intense sunlight when they should be at peak efficiency, photovoltaics can suffer from significant drops in conversion efficiency if the electronic circuitry does not compensate for this.

As current is proportional to cell size, the small photovoltaics panels designed for IoT devices supply less current than the larger units intended for home or industrial energy generation. As a result, it is important to limit the current drawn by the conversion circuitry to avoid forcing the converter circuitry to latch up until the system is reset. The most efficient way to achieve this is to employ MPP tracking. Operating with MPP tracking, the inverter circuitry can use the optimum combination of voltage and current and supply a load with the necessary resistance to allow efficient energy harvesting.

The TPS61200 from Texas Instruments is a DC/DC converter that was designed for use with either battery or solar energy sources. The boost converter in the TPS61200 has the ability to start up from a voltage as low as 0.3 V with the help of an external inductor in the 2 µH to 5 µH range and a 4.7 µF capacitor to improve transient behavior. The device has three different N-channel FETs inside that are used to maintain synchronous power conversion over the converter’s entire range with high efficiency.

Since it takes time to generate a sufficiently high voltage to power typical microcontroller and mixed-signal components, which often need a supply in the 3 V range, the device has two output pins: VOUT and VAUX. The VAUX pin allows low-voltage components to be powered as quickly as possible with the proviso that they are able to operate with a low supply voltage. Once the converter is able to generate a sufficiently high output voltage – this is the point at which the output capacitor on VAUX is charged to 2.5 V - VOUT becomes active. To avoid excessive current draw at startup, the converter limits its current at first, allowing the current to rise along with the output voltage.

Although it does not implement MPP tracking internally, the TPS61200 can be used with a relatively simple analog circuit based on an op-amp, voltage reference and a number of passive components. Powered by VAUX, the op-amp should be a rail-to-rail amplifier with low power consumption that is able to work at low supply voltages.

The op-amp’s output is connected to the feedback pin of the TPS61200 to control the output voltage of the converter, using the supplied input voltage of the solar cell and comparing that to a voltage reference. If the voltage reference is controlled by a potentiometer, rather than by a resistor divider, the circuit offers the ability to adjust the circuit to different solar cell types and different conditions. In the final application, the potentiometer can be replaced by a fixed voltage divider after the ideal value for the maximum power point of the specific solar cell is found. 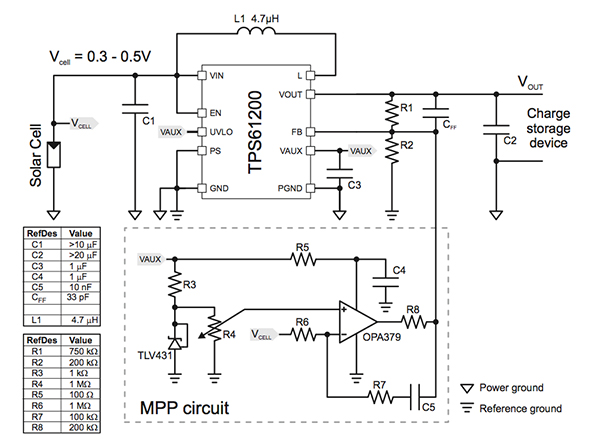 At low load currents, below an average of 300 mA, which is typically the case with designs built around small solar harvesters, the converter enters a power-save mode to maintain high efficiency over a wide load current range. In this mode, the converter delivers energy as short pulses. An output capacitor acts as an energy reservoir to smooth out the pulses.

The bq25504, also supplied by Texas Instruments, incorporates an MPP tracking circuit and is designed to operate with either thermal or solar harvesters. Although it needs to be started with an input voltage of at least 330 mV, once started the device can harvest energy down to 80 mV, making it suitable for use with thermal generators that may be dealing with very small temperature differences – although a significant difference is required to allow the circuit to start.

With the aid of an external step-up transformer and a small coupling capacitor, the Linear Technology LTC3108 can operate with input voltages as low as 20 mV. The low-voltage capability of the converter enables it to be used with Seebeck-effect harvesters that may operate with temperature differentials as low as 1°C. These small differentials are often encountered in body-worn sensors where the primary heat source is the difference between the person’s skin temperature and their immediate environment.

The frequency of oscillation of the converter is determined by the inductance of the transformer secondary winding and is typically in the range of 10 kHz to 100 kHz. For input voltages as low as 20 mV, a primary-secondary turns ratio of about 1:100 is recommended by Linear. Similar to the TPS61200, to allow use with both low-voltage, permanently active circuitry and sleep-capable microprocessors, there are multiple voltage outputs. As well as the permanently enabled VAUX, the LTC3018 has not just a VOUT pin capable of generating up to 3.3 V, but also a 2.2 V LDO output designed for use with a low-power microcontroller.

To help support energy-harvesting applications, Cymbet and IXYS have developed small portable solar cells. The Cymbet CBC-PV-01 is a low-voltage amorphous silicon solar cell on a glass substrate with a collection area of approximately 30 square centimeters. Its typical operating voltage is 0.8 V with an output current of approximately 200 µA at 200 lux under fluorescent light.

Organized as a small string of cells inside a SOP8 package, the IXYS CPC1822 provides a higher output voltage than a single cell, allowing use with more conventional DC/DC converters. The nominal output voltage is 4 V, operating under both direct sunlight and artificial light, providing a short-circuit current of 50 µA under 6000 lux direct sunlight.