Industrial users face a number of pressures when it comes to selecting light sources. Regulations and economic pressures are pushing them to invest in energy-efficient lighting, including light-emitting diodes (LEDs) that can offer long lifetimes.

Industrial users face a number of pressures when it comes to selecting light sources. Regulations and economic pressures are pushing them to invest in energy-efficient lighting, including light-emitting diodes (LEDs) that can offer long lifetimes, and therefore allow companies to reduce maintenance costs.

However, a change in lighting technology is not essential to meet economic objectives. Smart-power sources for lighting fixtures provide industrial users with a wide range of choices, making it easier for them to select light sources that fit the application.

The high-intensity discharge (HID) metal halide lamp has become one of the most popular choices among industrial users, particularly where large areas need to be covered cost-effectively – such as loading bays and high-ceiling warehouses. The overall concept is similar to that of a fluorescent lamp in that the light is produced by ions when they are excited by an electrical current passing between two electrodes. However, unlike fluorescent light sources, there is no need for a phosphor to convert the photons from the ultraviolet to the visible light spectrum. The ions release visible-light photons in a narrow frequency range, giving the lamps a characteristic color.

Although simple in concept, HID lamps call for careful power control to maximize energy efficiency. They require a high initial voltage for ignition – around 3 to 4 kV if the lamp is cold, and as much as 20 kV if the lamp is still warm. As the lamp warms up, the current needs to be limited until it is fully running.

Before ignition, the arc gap inside the lamp presents an open circuit. But, once it ignites and starts to conduct, the voltage across the lamp drops sharply to around 20 V. Current, if not limited, can build up to a very high and damaging level. However, as the lamp warms up, the voltage – and output power – increases until it settles to a nominal value of around 100 V. After this point the current supplied needs to be maintained at a constant level that is well matched across the lamps in an array to avoid color and brightness variation.

HID lamps can suffer from problems with acoustic resonance caused by standing pressure waves forming in the gas inside the tube. This resonance can distort the glass of the tube and even crack it, reducing the working lifetime of the bulb. A related problem is mercury migration. To avoid these problems, HID lamps can be driven with an AC voltage running at a fairly low frequency, typically below 200 Hz.

All of these factors call for an electronic ballast that is able to maintain effective control over all of these operating points. A typical circuit for controlling HID lamps will include a buck converter to control lamp current combined with a full-bridge output to provide the AC output needed to prevent acoustic resonance. The full bridge also needs a pulse transformer circuit to generate the kilovolt pulses used during ignition. Because of the power levels involved, a number of discrete components are required but sophisticated control ICs have begun to appear that make the circuitry easier to implement.

An example is the IRS2573D manufactured by International Rectifier. The IC contains control circuits for the buck converter, full-bridge elements as well as current and voltage sensing that drive feedback loops for controlling lamp current and power output. The IC includes a 600 V high-side driver for the buck converter’s gate drive that offers cycle-by-cycle overcurrent protection. 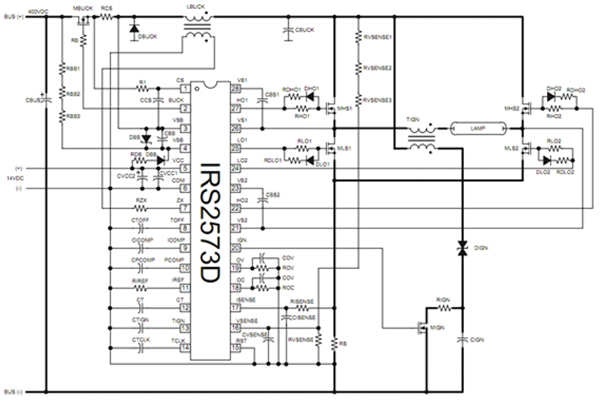 Industrial users are also turning to new technologies. Light-emitting diodes (LEDs) provide an increasingly effective alternative to conventional lighting technologies, offering high lifetimes and, because the core elements are small and easily arranged in different packages, high flexibility. Both suit the industrial environment well where there is often a need for specialist lighting fittings to illuminate workspaces and the critical parts of machine tools.

The LED is a directional light source that can have much higher efficacy when mounted in a fixture than other technologies, such as fluorescent or HID, that emit light in all directions calling for reflectors to recover some of the light and direct it towards the area of interest.

LEDs make it possible to build highly redundant lighting arrays, ensuring good illumination even if individual elements fail. They also support the ability to control light levels to fine levels of granularity, allowing reduced energy usage if an area is unoccupied. For example, in street-lighting applications, the illumination can be reduced when traffic is at a low level then maximized when emergency services pass through. A computer network provides the necessary control over individual luminaires. This can provide major energy savings compared with technologies that lose efficiency when not operated at peak output.

However, to deliver on the promise of high lifetime and efficiency, there is a need for careful design and control. Major concerns are flicker, lifetime, heat management and efficiency, as well as compactness to allow LEDs to be easily retrofitted to existing luminaires and fittings.

Efficient power conversion is essential in high-brightness industrial applications as excess heat will reduce the efficiency of the LED. Intelligent control is required in high-power LEDs to avoid the issue of thermal runaway in which increasing amounts of power are delivered in the attempt to maintain a constant power output that ultimately damages the affected LED itself.

There is also a need to implement power-factor correction. Power factor is important because low power factors increase losses in the power distribution network. Regulatory authorities throughout the world are forcing up their power-factor specifications. Energy Star Version 1.0 9 September 2007 for solid-state lighting luminaires mandates a power factor of more than 0.7 for residential applications but higher than 0.9 for commercial and industrial installations.

For advanced high-power applications such as dimmable street lighting, STMicroelectronics has developed a reference circuit that comprises two key stages. The first is a front-end power factor correction device, the L6562AT, and the second is a resonant power converter, the L6599AT.

Many power converters developed for use in lighting operate with a buck topology. However, ST decided to employ an inverse-buck architecture operating in continuous conduction mode so that the power switch could be connected to ground rather than the high side. This allows the power switch to be driven directly by a microcontroller, providing easier control over dimming using pulse-width modulation (PWM). The design makes it possible to drive as many as 16 output channels from low power to high power independently.

A major source of lifetime loss lies in the electrolytic capacitors that are often used to provide smoothing between the power-factor correction and power conversion stages. The high heat levels generated by high-brightness LED installations can dry these capacitors out relatively quickly, causing them to fail long before the LED or power-conversion circuitry. Power Integrations designed its LinkSwitch-PH and LinkSwitch-PL families of LED drivers to eliminate these capacitors by moving to single-stage architecture. The company has also designed its products to also avoid the need for output capacitors.

Figure 2: Circuit example for a dimmable LED controller using a Power Integrations LinkSwitch-PH device. (Click to enlarge)
NXP Semiconductors’ SSL4101 combines a power factor controller and flyback controller in a single package that can be driven from any AC supply from as low as 70 V and up to 305 V. For flexibility, both power stages operate in quasi-resonant or discontinuous conduction mode, with switching operating independently. To reduce losses when low levels of power are required, the power factor correction will suspend operation and the converters will also limit their operating frequency to reduce the impact of switching losses.

In outdoor applications, many LEDs will be used in multiple strings to maximize light output and also provide redundancy. The National Semiconductor LM3466 provides dedicated control for these strings. The device equalizes the current provided by the supply in a preset ratio for each active LED string, regardless of the number of strings connected to the supply or the forward voltage of each LED string. If any LED string opens during operation, the LM3466 automatically equalizes the supply current through all of the remaining active LED strings. As a result, the overall brightness of the lighting system is maintained even if some LED strings open during operation.

The LM3466 integrates a 70 V power MOSFET with a current limit of 2 A. To add one more LED string to the system, only a single resistor, a capacitor, and an LM3466 are required. Supervisory features also include under-voltage lock-out, fault reporting, thermal latch-off, and thermal shutdown protection. The LM3466 comprises purely linear circuitry so that the EMI of the application circuit is not deteriorated.

One of the advantages of LEDs lies in their dimmability, but this is a feature that has been made available in recent years to another energy-efficient lighting technology: fluorescent. Fluorescent lights require ballast for control because, as the argon gas in the tube become excited it ionizes, which increases conductivity. The inductors inside a traditional ballast were used to limit this current over a narrow range of voltage and frequency. Electronic control using a variable-frequency inverter makes it possible to tune the inductor’s behavior and provide control over a much wider range of frequencies, offering the ability to control the lamp’s output.

Atmel has produced a reference design kit to demonstrate how electronic control can benefit fluorescent lighting in industrial settings. The Atmel ATAVRFBKIT, for example, combines the company’s AVR microcontroller with power semiconductors from IXYS to provide a dimmable ballast that can operate with any AC voltage from 90 to 265 V and DC supplies from 90 to 370 V DC. The unit will drive two T8 lamps and has a number of power-saving options.

As well as the L6574, which provides dimming support, STMicroelectronics has the L6585DE ballast controller combo IC, which integrates power factor correction and automatic detection of old and failed T8 tubes.

When an old lamp is connected to the ballast, the strike voltage needed to ignite the lamp will be higher than the nominal voltage and may even be higher than the safety threshold. During ignition, because the frequency will decrease, the voltage at the output of the ballast can easily reach dangerous values. Similarly, if the lamp tube is broken, the lamp cannot ignite and the lamp voltage must be limited.

The L6585DE will sink current from the supply flowing into the lamp if the voltage reaches a critical level, which will, in turn, increase the frequency and limit both current and voltage. The IC also has support for several phenomena exhibited by old lamps, such as the rectifying effect, and correct for them.

By developing a range of control ICs and power semiconductors, vendors have maintained a wide range of illumination choices for industrial users as they look for reductions in energy cost and improvements in reliability.

This article has provided an overview of lighting technologies for industrial users and the power-control solutions available for them that improve efficiency and lifetime. Lighting power control ICs discussed include products from International Rectifier, NXP Semiconductors, Power Integrations and STMicroelectronics.