Angle and motion sensors are widely used in vehicles for applications such as pedal position sensing and throttle control as well as being used in transmissions and steering wheels. It hardly needs stating that, particularly in steering systems and the throttle, reliable operation is absolutely essential to the safety of the driver, passengers, other road users, and pedestrians. Automotive sensors, then, must be extremely robust and perform reliably for the life of the vehicle.

At the same time, the standards for electromagnetic compatibility (EMC) in vehicles are becoming more stringent, and the development of a new generation of low-carbon diesel and gasoline engines requires better sensor performance with higher resolution and low-power operation. For instance, in steering applications, automotive designers are looking for components that draw ultra-low stand-by current. There is even a move towards ‘measurement on demand’ to reduce power consumption in control electronics.

All of these factors in combination are accelerating the elimination of traditional contacting-sensor solutions and their replacement by contactless sensors.

Austriamicrosystems has pioneered the development of integrated Hall effect encoder solutions, optimizing its AS5xxx series sensors for automotive applications. This article describes how robust performance in challenging automotive conditions is facilitated by the use of a patented differential sensor technology. 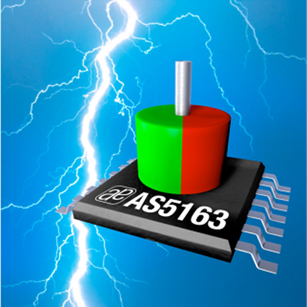 
The differential principle implemented by the AS5xxx devices is designed to eliminate the effect of environmental factors such as stray magnetic fields, vibration, and misalignment.


This differential principle entails the use of four Hall effect elements inside the IC. Traditionally, magnetic position sensors use only one Hall effect element. These four elements, equally spaced underneath a diametrically magnetized rotating magnet (see Figure 2), generate four sinusoidal waveforms, each phase shifted by 90 degrees from its neighbor. This can be expressed in the formula:

By using differential amplification of the opposing sets of sensors:

These two analog signals are then digitized by analog-to-digital converters (ADCs) before being processed further in the digital domain. A coordinate rotation digital computer (CORDIC) inside the AS5xxx device transforms the sine and cosine data into angle and magnitude information, using the following formulas:

the term 2*â cancels and the remaining expression is

This reveals the major advantage of the differential principle – it is independent of signal amplitude and consequently, independent of temperature variations as well as variations due to the size of the gap between the sensor IC and the magnet. It also cancels out magnetic offsets caused by stray magnetic fields.

Figure 3: Cross-section through the magnet and sensor.


As long as all the Hall effect elements are within this linear range, the differential signals [see formula 2] will remain unchanged, independent of the horizontal position of the magnet. Temperature compensation, required for linear Hall effect sensors, is not necessary in the AS5xxx. The ICs automatically correct for changing magnetic field strengths over the full operating range of -40 degrees celsius to +150 degrees celsius.

It is interesting to compare magnetic encoders that use the differential principle to other Hall effect encoder solutions that use ferromagnetic field concentrators. In the case of the AS5xxx, compression measurements show no change of angle output in the presence of homogeneous stray fields up to 20.000 A/m (25 mT). When static and dynamic stray fields were applied to the sensor system (see Figure 4), the position information (X,Y,Z) produced by the sensor was unaffected; the sensor is robust by design. 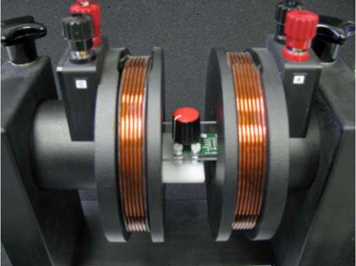 Figure 4: AS5163 Sensor and magnet in a Helmholtz coil to analyze the impact of magnetic stray fields.


Hall encoder solutions using ferromagnetic field concentrators are very sensitive to static and dynamic stray fields. Several degrees of angle error can be observed at low magnetic field strength amplitudes of 500 to 1000 A/m. To avoid these effects, a sensor with a field concentrator needs expensive magnetic shielding materials close to the sensor.

Figure 5 shows the impact of a dynamic magnetic stray field (20 Hz) 1000 A/m (1.26 mT) on the sensors. The main magnet was located in the Helmholtz coil as well and placed at a certain position. The sensor was programmed for 360 degree, full-turn mode with an output range of 0.5 V to 4.5 V. The oscillation represents the 20 Hz stray field disturber. The angle error is around two to three degrees in this case. 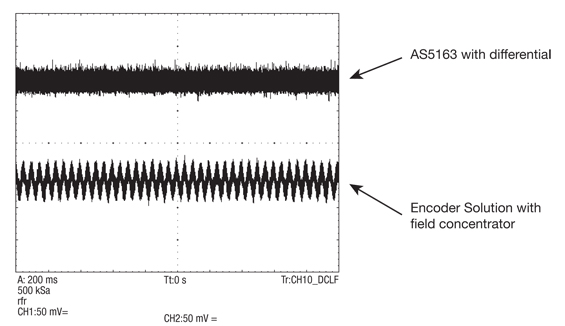 Figure 5: Comparison of AS5163 outputs with outputs from a sensor using a field concentrator at 20 Hz 1000 A/m.


The differential principle works at any angle. The impact on sensors using a field concentrator, however, is strongly affected by the magnet’s position. An analysis of sensor outputs over ten different angles is shown in Figure 6.

Figure 6: Accuracy of angle output in the presence of stray magnetic field.

Magnetic disturbance is not the only environmental factor to affect position sensor outputs; electric disturbances also affect output. Overvoltage pulses or micro-interruptions on the supply can occur at any time. The AS516x is able to overcome these without any damage and restarts without a reset as soon as the disturbance has disappeared. In addition, the AS516x is able to survive overvoltage pulses up to +27 V. Damage resulting from faulty connection is also prevented because the device offers -18 V reverse-polarity protection.

In addition, a permanent short-circuit at high ambient temperature cannot damage the device.

A watchdog function and internal and external diagnostics make the sensor solution suitable for safety-critical applications such as pedals.

Robust communication from the sensor

Many traditional sensors deliver their output as an analog signal. The vehicle’s Electronic Control Unit (ECU) must then digitize it with an ADC before it can be used. This has many disadvantages. For instance, electromagnetic events and other sources of noise can corrupt the signal, requiring the use of analog filters in the ECU to compensate. Error handling is also difficult and expensive. To achieve small failure bands in the range of one percent is difficult, and it is challenging to handle the leakage effects caused by broken VDD or GND over all operating conditions.

Digital single-wire communication eliminates these problems. New automotive digital interfaces, such as SENT J2716, are becoming more widely supported, and the new AS5165 (available from the manufacturer XXXXX) is compliant with the SENT J2716 standard. The PSI5 interface is another option. This interface is robust and has many valuable features. Bi-directional communication is handled by current and voltage modulation on the supply line. The sensor has only two connections, which helps to reduce costs.

Magnetic Hall effect encoders are available from austriamicrosystems as rotary and linear variants. They are equally robust and offer highly accurate and precise position information under the harsh environmental conditions experienced by vehicles. As austriamicrosystems continues to invest in improvements to its range of magnetic encoders, design engineers can expect to see a continued commitment to the production of robust devices that operate successfully in safety-critical applications.