Servers, switches, and gateways in an increasing number of communications and industrial-control systems are being designed with redundant components and modules to avoid expensive outages and support 24/7 operation.


Servers, switches, and gateways in an increasing number of communications and industrial-control systems are being designed with redundant components and modules to avoid expensive outages and support 24/7 operation. However, the failure of individual components and boards remains a possibility even with systems that are designed to have a high degree of redundancy. A line card, processor module, or interface may fail over to a spare module, allowing for the minimum possible outage. The failed board will need to be replaced quickly to guarantee the system’s future uptime performance and it is clearly unacceptable to power down the entire unit, replace the board, and then reboot in order to do so. As a result, hot-swap support for individual modules is essential.

A hot-swap controller may be designed for specific boards or implemented as a plug-in module – an approach used by a number of systems manufacturers because the module can be reused across many different board types. The development of the PMBus standard has helped standardize the connections needed, which has helped the development of these modules as well as custom boards. 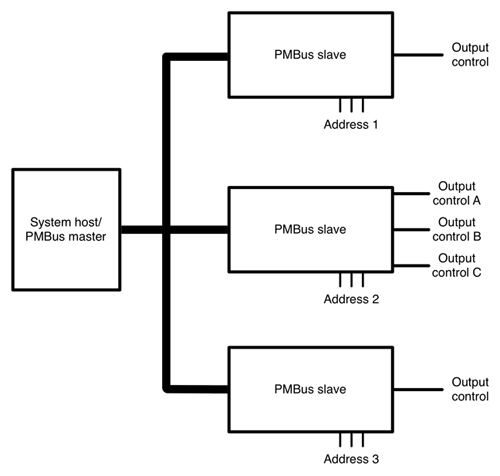 The PMBus is an open power-management protocol that uses commands and responses sent via serial bus between a system management unit and power controllers on plug-in boards. Release 1.0 of the standard was published in March 2005, and ownership of the PMBus specification and documents transferred to the System Management Interface Forum. Release 1.2 is now available from the forum.

The transport layer for the PMBus is based on that of the System Management Bus (SMBus), a variant of the commonly used I²C serial bus used by many consumer board designs. However, in contrast to its consumer-focused version, the SMBus was made more robust to deal with the requirements of industrial and high-reliability commercial systems. As well as the two signal lines supported by I²C, the SMBus has an additional alert line used to allow any controller on the bus to interrupt the system master. This reduces the need for that master to continuously poll slaves for updates. 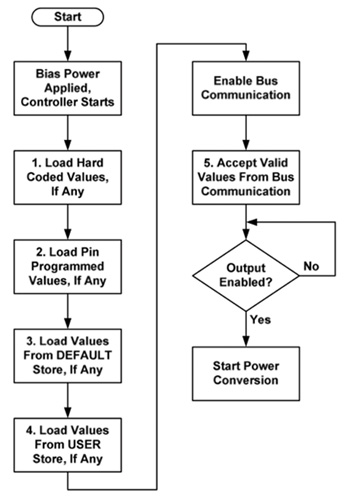 The PMBus protocol demands that all slaves store configuration data, including their physical address, in non-volatile form using either non-volatile memory or the state of pins. For example, the National Semiconductor LM25066, which is now part of the Texas Instruments portfolio, has three external address lines that are used to define the physical address that will be used by the hot-swap controller. The state of these pins can be controlled using DIP switches on the front panel of the board. This use of stored configuration data allows very low startup times because slaves can boot without intervention from the system master.

In addition to the lines defined by the SMBus, the PMBus defines two additional signals. One is the control signal used to switch local power converters on and off; the other is a write-protect line that can be used to prevent any changes to the stored data used by the PMBus controller.

There are a variety of ways in which a hot-swap controller can interface with board-level power converters and the overall power subsystem. As board space is often limited, the area available for hot-swap logic and related power devices is often at a minimum, necessitating the use of highly integrated power-control devices. IC manufacturers have responded by designing integrated PMBus-compatible controllers that can monitor the local power and thermal environment, control power to the rest of the board and report status information to a system power manager.

In many cases, the hot-swap controller will interface to a pass MOSFET that is used to isolate power from the board itself until a stable power signal is detected or the controller receives a message to activate the circuitry on the board. In other cases, more complex scenarios are possible in which the hot-swap controller manages power sequencing and the runtime behavior of point-of-load (POL) converters using digital control lines.

The LM25066 employs a pass MOSFET to control power to the rest of the board that it protects. The LM25066 includes circuitry not only to prevent damage during insertion and removal, but to monitor the status of onboard power during operation. A fast-acting circuit breaker has been included to prevent damage in the event of a short circuit on the output. It is possible to configure input under- and over-voltage levels and hysteresis to ensure that delicate electronics on the local side are adequately protected. The LM25066 also makes it possible to control the delay before the pass MOSFET is activated and starts providing power to the rest of the board, as well as the delay before the circuitry acts to protect circuitry in the event of a fault. So that a local microcontroller or other circuitry on the board can monitor power status, a POWER_GOOD signal line provides rapid indications of when the input or output voltages are outside their programmed range.

There is a temperature-monitoring unit on the LM25066 that works with an external diode to monitor the temperature of the external MOSFET or any other thermally sensitive components on the board. In the event of a warning or a fault, a ‘black box’ function stores telemetry data for later recovery when the fault has passed or if the board is returned for repair.

The Analog Devices ADM-1275 also provides board-level power control using a PMBus interface. The device has an integrated 12-bit analog-to-digital converter that can be accessed by the system controller using PMBus commands to provide real-time data on load current and voltage.

The PMBus is designed to make it possible to manage individual POL converters on a board, providing fine-grained control over power. For example, the PMBus controller may activate each of the POL converters in a sequence to avoid disruption to the main power bus through excessive voltage sags, or other problems if too many loads are introduced after a board has been inserted. Using the PMBus to manage power sequencing means it is possible to change operating parameters at any point in a product’s life cycle and to respond in ways that are appropriate for the chassis into which a board is inserted. For example, a large chassis may be able to tolerate a much faster power-up sequence than a low-cost version designed for smaller installations.

The one-byte command codes supported by the PMBus standard allow for more than 100 power-management commands – with considerable room for expansion as the standard also allows for two-byte commands to be used in the future. Commands can be used to set the output voltage of an individual POL converter as well as warning and fault thresholds, responses to problems, such as immediate shutdown or the use of a hiccup mode, as well as temperature and other environmental limits.

Generally, two commands are used to control the startup sequence of point-of-load (POL) converters on the board, managed by an individual PMBus-compliant hot-swap controller. TON_DELAY programs a time for the converter to wait after receiving the control signal before starting to provide power to downstream devices, or for a PMBus controller to wait before sending a power-up signal to a less intelligent POL converter.

Similarly, TOFF_DELAY is used to control how long the converter waits before disabling power to its downstream components. Again, this functionality can be implemented by the PMBus controller itself, which simply waits until the delay time has expired before sending a power-down command to a POL converter. This is the strategy employed by the MAX34400 made by Maxim Integrated Products. The controller will wait for the commanded number of milliseconds before asserting the output enable of the target converter. The MAX34400 supports up to six local DC/DC or POL converters.

In designs that use intelligent POL converters or where the PMBus controllers can provide fine-tuned control over output voltage, the TON_RISE and TON_FALL commands can be used to control how quickly voltage is increased and reduced, respectively, once a TON_DELAY or TOFF_DELAY command is received. 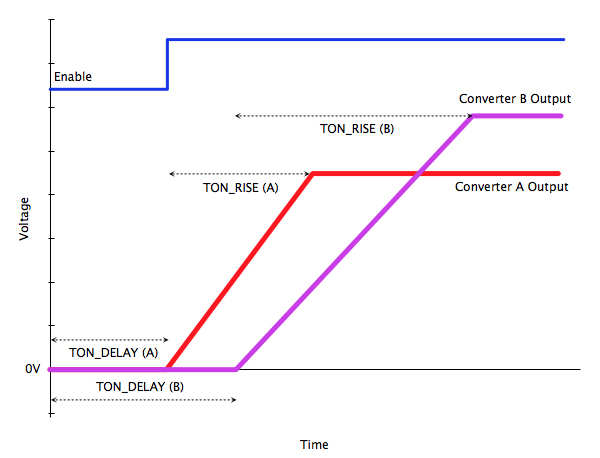 Figure 3: Example of the use of the TON_DELAY and TON_RISE signals with two different POL converters.

A useful feature of the PMBus is its support for voltage margining. Many manufacturers of circuit boards now use margining during test to determine whether IC performance will suffer excessively due to minor variations in supply voltage. Any marginal or out-of-specification devices can be detected during this process and replaced before leaving the production facility, reducing the probability of an expensive failure in the field.

Historically, margin testing was a time-consuming procedure involving the manual fitting of resistors to DC/DC converters to force their output voltage to vary outside the nominal range. Using the voltage margining commands of the PMBus, it is now possible to perform these tests automatically. Two commands, VOUT_MARGIN_HIGH and VOUT_MARGIN_LOW, can be sent over the bus to force the voltage high or low, respectively.

The MAX34400, for example, uses six pulse-width-modulation (PWM) outputs to control the voltage margin used by each of the downstream POL converters that it manages. The MAX34400 also has a number of environmental inputs, accepting temperature information from up to eight different thermal sensors, as well as analog inputs used to measure the voltage generated by each of the POL converters that it manages.

Power supplies are available that support commands sent via the PMBus. An example is the Intersil ZL9101M, a 12 A variable step-down digital power supply module that incorporates a digital PWM controller, power MOSFETs, inductors, and passive components. It supports an output voltage range of 0.6 V to 3.6 V that can be set using external resistors or using PMBus-generated commands. Only the SMBus device address and maximum voltage output need to be set using external pins.

To help with the implementation of PMBus-based designs, STMicroelectronics has produced an evaluation module based around its ST7 microcontroller that allows commands to be generated from a host PC relayed via a USB link to the PMBus. The STEVAL-ISQ006V1 acts as a PMBus master. A graphical user interface makes it easy to control one or more PMBus slaves on the shared bus. PMBus provides a solution not only for preserving the power integrity of high-availability systems by supporting the requirements of hot-swap boards and dynamic systems management, but also provides greater overall reliability through its support for demanding production tests. Thanks to support from leading IC vendors, PMBus functionality is becoming easier to add to circuit-board designs.

This article has provided an overview of techniques for implementing PMBus power control for high-uptime systems in industrial and communications systems. The devices discussed include products from Analog Devices, Intersil, Maxim Integrated Products, STMicroelectronics, and Texas Instruments.