As need for RF energy rises, its engineering becomes simpler with wireless IC's and other components from Texas Instruments, Linear Technology, and ROHM Semiconductor.


Thanks to a widespread growth of wireless communications, the availability of ambient RF energy offers an increasingly attractive power source for many low-powered designs. RF energy harvesting offers significant advantages for many applications, but it requires careful attention to key components, including receiving coils and power conditioning circuits required for this approach. For engineers, efficient RF energy-harvesting design has become simpler thanks to available components and ICs from a variety of manufacturers, including Intersil, Linear Technology, ROHM Semiconductor, STMicroelectronics, Texas Instruments and Vishay Dale, among others.

Along with its growing availability, RF energy harvesting brings multiple benefits to system design itself. Besides enjoying reduced wiring and cabling requirements, a design powered from ambient RF energy can be completely sealed and protected from environmental conditions and hazardous materials. A reduced maintenance requirement not only offers its own merits, but also allows engineers to place systems in locations that are hard to reach or that suffer from reduced availability of other ambient energy sources such as light, temperature, or vibration. For mesh networks, such as those envisioned in the Internet of Things (IoT), engineers can combine RF energy harvesting with sophisticated device-to-device communications using ambient backscatter modulation of the RF source by each individual device.

Figure 1: An energy-harvester circuit typically rectifies voltage output of the ambient energy collected by a transducer. Most applications require a means to store the resulting energy and regulate voltage output delivered to the load (Courtesy of Linear Technology).

With RF energy harvesting, engineers face unique challenges in ensuring maximum energy output. At a fundamental level, engineers must contend with weak ambient RF sources. Although forms of RF energy permeate most enclosed areas, they are often at levels below what engineers might expect to find with alternative ambient sources (Figure 2).

RF transmitters for communications are typically constrained in the amount of power they can radiate. Furthermore, for a given radio source, the power at the receiving antenna falls off with distance as predicted by the Friis transmission equation:

In this environment, design of the receiving antenna plays a critical role in maximizing efficiency of energy harvesting. Although receiving antennas can be etched into printed circuit boards, engineers can find available receiving coil components specifically designed for the task. As with many such devices in this class, the Vishay Dale 48 mm x 32 mm IWAS-3827EC-50 receiving coil (Figure 3) features low DC resistance (200 mΩ) and inductance (9.7 μH). Optimized for wireless power applications, these receiving coils typically feature high- permeability shielding and are built to block charging flux from other circuit components. 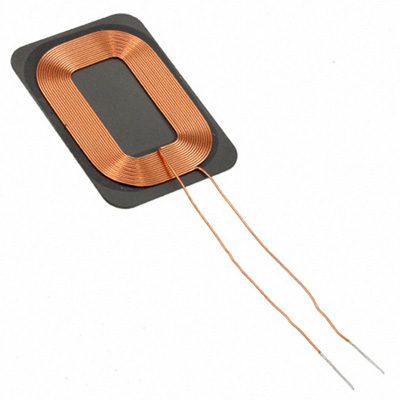 To generate maximum voltage drop across the coil, engineers would typically add a capacitor in parallel to form a resonant circuit tuned to the frequency of the highest power RF signal. Properly tuned and matched to the load, the output of this resonant circuit would represent the best possible energy output from the optimal RF source.

Using RF energy to power application circuits typically requires a power stage to drive the load or charge an energy storage device such as a supercapacitor or thin-film battery. In the past, engineers looking to implement RF energy harvesting would need to design a custom power stage comprising at a minimum a rectifier such as the ROHM Semiconductor FMN1 or ROHM FMP1, among many others. In addition, the power stage would typically need to boost the rectified voltage output using a DC/DC boost converter such as the Intersil ISL9111 or Linear Technology LTC3429 prior to use by the load or for charging a storage device.

Rather than build a power stage from scratch, however, engineers can find integrated devices that deliver the functionality required for RF energy harvesting. Although many of these devices are built to target the requirements of specific application areas, they can serve more general design needs. The STMicroelectronics M24LR16E-R is designed for conventional NFC/RFID applications, but the device includes special features for RF energy harvesting.

On the input side, the M24LR16E-R provides two pins for RF input from a receiving coil. Besides supporting NFC/RFID application functionality on the output side, the device provides a dedicated Vout analog pin. When programmatically set into energy-harvesting mode, the device uses Vout to output excess energy captured by the device from the RF field. Power on Vout is limited to ensure that the M24LR16E-R has sufficient internal power, but this residual power can be sufficient to drive various low-power application circuits. Engineers can explore the device's energy-harvesting mode using ST's ROBOT-M24LR16E-A evaluation board, which includes an etched inductive antenna, M24LR16E-R IC, PC connector, and associated components. 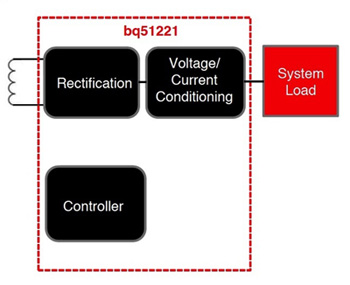 Fast-growing proliferation of mobile systems and wireless smart sensors continues to drive an explosive growth in all forms of wireless communications, resulting in near-pervasive availability of ambient RF energy. For engineers, RF energy harvesting offers an increasingly favorable alternative for supplying low-power designs such as wireless sensors and other devices built for the IoT. Using available components, engineers can easily build circuits able to harvest RF energy; but the growing availability of wireless power ICs provides a ready solution for incorporating RF energy harvesting in any low-power design.