Partitioning and IoT Design Brings 8-bit MCUs into the Limelight

The dominance of uncomplicated circuits and thin clients in Internet of Things (IoT) applications is likely to keep the 8-bit MCU market growing.


Although microcontroller system design practice started to shift toward 32-bit devices several years ago, the dominance of uncomplicated circuits and thin clients in Internet of Things (IoT) applications is likely to keep the 8-bit MCU market on a healthy growth path. This will add to the already healthy 8-bit market in automotive, industrial, and commercial applications that so far has not moved to 32-bit instructions set devices.

From a market-share perspective, there is little doubt that the design world is evolving toward 32-bit MCUs, according to UK-based market research firm IC Insights. In 2013, 32-bit MCU shipments increased by about 20 percent while 4/8-bit MCUs shipments grew by about 6 percent and 16-bit volume grew by 9 percent. Despite the growing popularity of 32-bit designs, however, unit volumes of 4/8-bit and 16-bit MCUs continue to be larger, as shown in Figure 1. 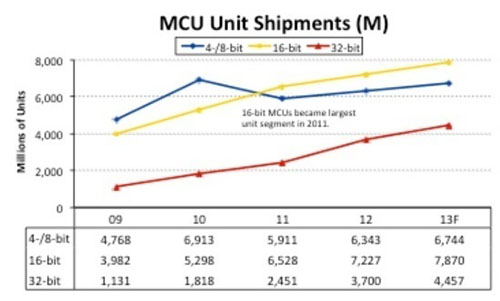 The growth of 32-bit computing is due to several factors, including a trend toward unit costs that are, in some instances, competitive with the smaller-bit-width MCUs. From a technical perspective, 32-bit popularity is due to its expanded memory requirements, native 32-bit math, and advanced peripherals.

When these features are not required, the case for choosing 32-bit MCUs is considerably weakened and one of these applications domains is IoT.

It is a foregone conclusion that managing a single sensor or a small group of sensors in smart home applications — such as thermostats or monitoring whether a door is open or closed — requires only an 8-bit MCU from a performance perspective. Once the data is delivered to a gateway device, however, security, privacy, and computing requirements — as well as the advantage of coding in C — often put the application in the 32-bit space.

Similarly, any wearable health device, such as a blood pressure cuff or glucose meter that can be purchased off-the-shelf in a pharmacy or other retail outlet, will have an 8-bit MCU managing the sensor. A 32-bit MCU may be included if data has to be transported through a gateway. The same is true in industrial and commercial applications.

In short, partitioning a design can lead to savings in cost, design time, and power consumption, as well as making the design easier to upgrade to the next generation.

Unfortunately, not all products benefit from the advantages of design partitioning because some designers almost automatically opt for a 32-bit MCU for every part of an IoT-connected system. They believe its expanded memory requirements, native 32-bit math, and advanced peripherals are always an advantage. These decisions are often based on misconceptions.

A few misconceptions that can lead to a sub-optimal decision include: Optimizing the MCU

Silicon vendors with 8-bit product lines have added features that remove whatever perceived edge the 32-bit MCU may have at the periphery of an IoT system. This most often takes the form of integrating analog peripherals. One example is capacitive touch.

Although IoT applications are usually thought of as machine-to-machine (M2M) interactions, human-to-machine interfaces (HMI) also have a significant role to play. Handheld, human-operated industrial devices, toys, gaming machines, and remote controls, as well as control panels for white goods such as washers, dryers, ovens, and dishwashers now all offer an IoT dimension.

Capacitive touch is a prominent HMI implementation technology. By integrating a 10-bit ADC, voltage reference, charge-timing capacitance to digital converter, and a temperature sensor in an 8-bit MCU, capacitive-sensing functionality can be achieved at optimal cost.

Figure 2 is a generic-block diagram for the C8051F97XX Silicon Labs 8-bit MCU family. 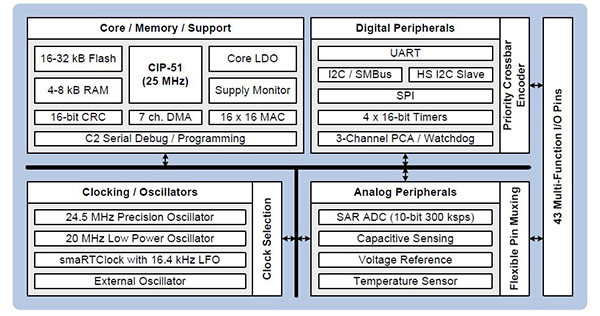 Another MCU vendor that has integrated capacitive-sensing peripherals into their 8-bit chips is Microchip Technology. Its PIC10F204 family includes the PIC10F204T-I/OT. Unlike the 8051-based Silicon Labs chip, it has a RISC architecture with only 33 single-word single-cycle (1 µs) instructions, except for program branches, which take two cycles.

A different approach to capacitive-touch applications — still utilizing 8-bit MCUs — is to provide software and ancillary hardware that works with a general-purpose MCU to create a capacitive-sensing system. Atmel Corporation’s QTouch Library helps designers implement capacitive-touch button, slider, and wheel functionality into its general-purpose 8-bit AVR MCUs, such as the ATTINY5-TSHR.

The QTouch Library files for each device and supports different numbers of touch channels, enabling both flexibility and efficiency in touch applications. By selecting the library file supporting the exact number of channels needed, developers can achieve a more compact and efficient code using less RAM.

In smart homes, commercial HVAC systems, and some industrial networks, the value of controlling brushless DC motors remotely is a growing use of IoT application space. In this M2M application, the process for selecting when to use an 8-bit MCU is once again a matter of partitioning. Not much computing power is required simply to spin the motor in these relatively simple applications.

Although the trend toward 32-bit MCUs is cutting into the market share of 4-, 8-, and 16-bit MCUs, the older chips are still going strong in several markets and IoT applications will in all likelihood benefit from the 8-bit chips in particular. While some MCU vendors have virtually abandoned the older architectures, a few are tweaking them in interesting ways to provide better performance and functionality than their 32-bit competitors.

Benefiting from these advantages is sometimes overlooked because there is no reason that 32-bit MCUs cannot be configured with the same analog peripherals — and MCU vendors do exactly that. In order to recognize the benefits of 8-bit MCUs, design engineers should partition their systems and look for places on the periphery where 8-bit devices actually deliver better performance.

Sensor management and motor control are good examples in the IoT application space. In many instances they require none of the three core features of 32-bit devices. The same is true for automotive and industrial applications where the MCU is located at the periphery.