In intermediate bus architecture (IBA) applications, often a single DC/DC bus converter does not have enough juice to power all of the electronic loads spread across the system boards.

In intermediate bus architecture (IBA) applications, often a single DC/DC bus converter does not have enough juice to power all of the electronic loads spread across the system boards. In this case, a designer must either build a high-power, high-efficiency converter from scratch or parallel similarly efficient power supply modules to increase system output power to the desired level.

Designing a kilowatt-or-higher power DC/DC converter with very high efficiency and performance is not simple and can be time consuming as well as challenging, with the added possibility of increased height due to bigger passive components. Paralleling identical DC/DC modules for higher output power can expedite the task while maintaining the needed performance and profile. However, to satisfy these requirements, it is essential for the individual converters sharing the load current to minimize the dynamic response or recovery required of each.

Using two or more lower-power modules to produce higher output power also helps to distribute the thermal load across a larger printed circuit board (PCB) area, thereby avoiding any hotspots on the board. Not all modules, however, are designed for parallel operation, so before connecting them in parallel, the designer must ensure that the modules offer load-sharing capability.

In essence, modules that are designed to permit paralleling typically use active current sharing or a passive droop compensation technique. In active current sharing, which is usually found on higher-power modules, a separate signal line connects the paralleled modules and actively controls internal switching operation as a function of the sensed current level in each module. Allowing the power converters to communicate improves the accuracy of load sharing as well as maximizes the power output of the paralleled converter array.

By allowing the power output voltage to sag as a function of load current, droop compensation ensures balanced current sharing among the modules connected in parallel. Several power supply makers include this feature in DC/DC converters. Texas Instruments is one of them. According to TI’s Bob Sheehan, member of the technical staff, SVA application design services, current-mode controllers can be used for droop compensation and load sharing in parallel operation. However, Sheehan recommends using the circuit in Figure 1, which is a general method for droop compensation and load sharing when using a current-mode controller such as TI’s LM25117 or other similar controllers.

Figure 1: Rdroop limits the error amplifier gain and can be adjusted for the desired amount of droop compensation on LM25117 or other similar current-mode controllers.

Vicor, on the other hand, provides bus converters with the ability to share load current when connected in parallel for higher power applications. The maker’s BCM series, for instance, offers the ability to share load current inherently when the inputs and the outputs are connected in parallel. The load sharing is further reinforced with the positive temperature coefficient of the module’s output impedance ROUT.

According to Vicor’s application note AN016,¹ sharing accuracy is a function of input and output interconnect impedance matching, the output impedances ROUT of the BCM modules and uniform cooling.

Vicor notes that a very large number of modules can be paralleled. But, in practice, arrays larger than 10 become difficult due to input and output interconnect impedance matching problems and obtaining uniform cooling across the array.

Assuming equal cooling, an array can operate at full power with accurate sharing and no derating. Consequently, employing the guidelines presented by Vicor in the app note an engineer can design a high-power array that is optimized for protection, efficiency, and reliability with minimum noise.

Implementing the guidelines discussed, Vicor presents an example array of seven high-voltage-input 300 W BCM bus converters in parallel to provide a total power of 2.1 kW (Figure 2). The BCM part used in this design example is B352F110T30. 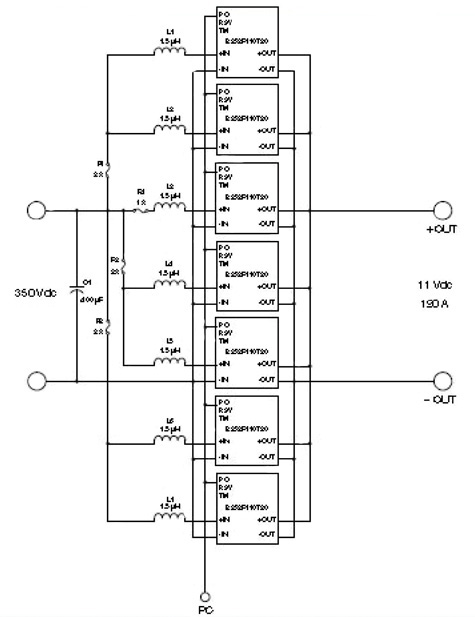 Since BCM modules switch at >1 MHz and offer an effective output ripple of two times the switching frequency, output filtering is achieved by using a small point-of-load capacitor in conjunction with the trace inductance. Similarly, as illustrated in Figure 2, the use of the input inductors curbs the high-frequency ripple current of each BCM module. The use of the input inductors confines the high-frequency ripple current of each module. Some input inductance between the modules inputs is necessary to minimize interactions between parallel-connected modules and allow for proper operation for the array. Additionally, the input inductance also reduces EMI and enhances the overall stability of the parallel system by reducing (or eliminating) beat frequencies caused by the asynchronous switching of the BCM modules in the array.

Table 1 illustrates the measured currents for the laboratory layout of the high-power array, as depicted in Figure 3. Even with less than ideal layout conditions (long wires, separate boards, use of standoffs to carry current), the overall sharing of the array is within 5 percent, according to Vicor.

Table 1: Measured currents for the laboratory layout of the high-power BCM array. 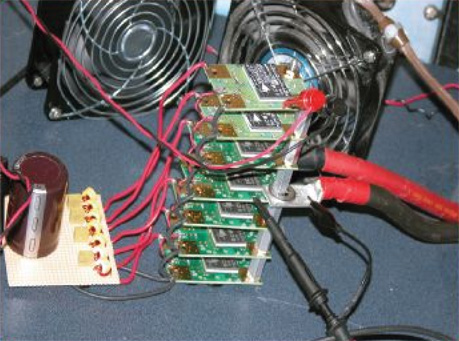 Furthermore, the BCM datasheet shows that by connecting the PC pins of the BCM modules in the array, all units in the array are enabled and disabled simultaneously. As a result, this ensures that no single BCM module in the array draws more current than specified during startup.

Although the array example focuses on high-voltage input BCM, the bus converter series also includes members with 48 V input and 12 V and below output with load sharing capability. One such part is BCM48BH120T120A00, a 120 W bus converter offering isolated 12 V nominal output from a 48 V input bus with the ability to share load current for parallel operation.

In summary, if care is taken in designing the input and output connections, high-power arrays can be easily built using bus converters set up in parallel.