See how packaging innovation helps reduce the size of switching converters for wearables and the design considerations involved when dealing with these devices.


For wearable devices, small size is an important factor in component selection, including those used for power. DC/DC converters are appearing that both provide high conversion efficiency and also minimize board space by integrating the conversion controller and key passives into a system-in-package module, helping to reduce size and simplifying layout. This article looks at the way packaging integration has helped reduce the size of switching converters for wearables and the design considerations involved when dealing with these devices.

Wearable device design presents a number of challenges but one of the critical elements is power efficiency, not just in terms of energy but size. These devices are worn for long periods of time, so they require good battery autonomy. Their proximity to the skin also demands high-efficiency converters, something that can be provided by switching power supplies rather than traditional low dropout regulators that have been favored in the past for compactness. However, switched-mode designs are more complex.

Although CMOS integration has allowed the scaling down of active components that include on-chip power transistors, traditional DC/DC converter designs assume the use of external passive components. These individual devices may not consume much volume on their own, but when used in combination to support the operation of the converter, require significant board space compared to the primary SoC.

Larger portable designs have been able to tolerate the board space required by the power circuitry. However, wearables by nature of their smaller size and demand for as much battery volume as possible for maximum time between charges put intense pressure on the other components in the system in terms of space.

As well as providing high conversion efficiency, DC/DC converters for wearable devices must also minimize board space, either by using fewer devices or packing more of them into a smaller space. The smaller size has knock-on effects on board layout as the size restrictions make it more difficult to move components around to minimize noise and parasitics and to isolate other sensitive parts of the system. Therefore, low-noise components and topologies are required to ensure the interference from high-efficiency switched conversion techniques does not impact other parts of the design.

Advances in materials processing for passives such as capacitors and inductors have made it possible to reduce overall size. To maximize the benefit of the savings in overall volume, manufacturers such as Murata, Texas Instruments and Torex have turned to system-in-package (SiP) technology to further reduce board space. The solutions integrate the control IC and inductor, as well as the capacitors in some cases.

SiP technology allows the integration of components into an IC-compatible package. Much shorter interconnects and the use of fine-pitch redistribution layers within the package not only reduce inductance and capacitance but allow the connection pads used by each device to be much smaller than on a PCB.

Although SiP technology minimizes the space taken up by the power converter, there are design choices to be made, as a single SiP topology cannot satisfy all possible design requirements. A key issue lies in the placement of the inductor within the package, which is why Torex has developed three forms of SiP for its XCL family of micro converters. Each microconverter includes a switching regulator with a single output and integrates the control IC and inductor. The package structure is determined by considering the product specifications, IC, inductor, thermal behavior and other characteristics. There are three main options in terms of layout. One is to cover the control IC with the inductor. This is best in terms of radiated noise and magnetic field emissions but tends to increase cost. The stacked nature of the package also reduces board space.

Stacking the control IC on top of the inductor reduces cost, as the wire bonding technology used to connect the pads on the raised IC is highly cost effective for stacked topologies. The same bonding techniques cannot be used when the control IC is covered by the inductor. However, this form increases the magnetic field strength close to the PCB, so cannot be used for designs that will be sensitive to this. Radiated noise is also a little higher compared to the reverse configuration. In addition, thermal behavior worsens, as there is no way to connect a heat pad to the bottom of the control IC to allow heat to be removed via the PCB. Heat also tends to flow between the stacked components.

Placing the IC and inductor side-by-side increases the board area required, although the improved space efficiency of SiP bond pads means that this space is dramatically reduced compared to implementations where the passives are arrayed on the underlying PCB. The arrangement allows maximum heat dissipation, comparatively low cost and radiated noise and magnetic field compatibility, although the noise performance of the stacked configuration with the control IC on the bottom remains better.

Microconverters can perform better in terms of noise compared to discrete implementations because they have much shorter interconnects. Their ready-made design also reduces the number of layout decisions that need to be made by the PCB designer, helping to speed up the project. The main consideration is the placement and routing of the ground and supply connections to minimize parasitics. 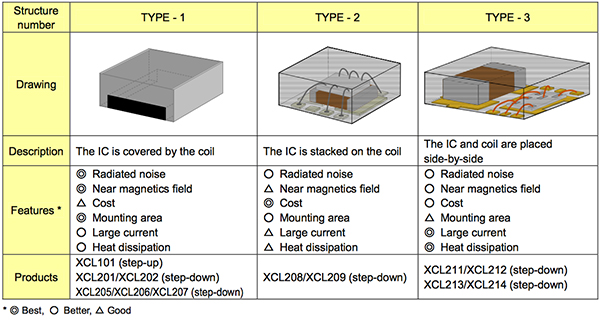 The XCL201, 202, 205, 206 products are synchronous step-down DC/DC converters with integrated inductors that conform to the inductor-on-top format. The whole SiP, including inductor, takes up 2.5 mm x 2.0 mm of board space. To limit the height of the combined coil and DC/DC converter to 1.0 mm, a novel ultra-flat package with a height of 0.4 mm is used for the DC/DC converter IC. The similar XCL208 and 209 use a simpler package construction, placing the inductor underneath the DC/DC to lower production costs. The XCL208 and 209 also provide the ability to set the output voltage but the XCL201 and 202 provide three percent higher power efficiency for most of the load curve. To reduce the size of the core converter package, two capacitors are required externally.

Like Torex, Murata has developed a range of DC/DC microconverters in its LXDC family, offering the choice of internal or external capacitors. To reduce the size of the core SiP, the LXDC2HL requires two external capacitors but the package itself measures 2.5 mm x 2.0 mm, using an embedded ferrite substrate in the package itself to form the inductor element. The length of the connection between the controller IC and the inductor is close to zero, further helping reduce noise emissions. The ferrite multilayer substrate technology is a process whereby up to fifty layers of different ferrite materials are pressed together to create a three-dimensional circuit within the substrate of the device.

The buck converter devices are designed for use with 2.3 V to 5.5 V sources such as lithium-ion batteries. The 2UR and 3EP series integrate the input and output capacitors onboard the ferrite substrate, increasing the size of the package slightly but providing greater space saving when integrated on the PCB. The 3EP has a larger overall package size of 3.5 x 3.2 mm but offers higher efficiency – up to ninty-two percent – as well as a higher maximum load of 1 A versus the 600 mA of the 2UR. Although the 2UR package includes capacitors, it is only slightly larger in terms of PCB area than the 2HL, at 2.5 mm x 2.3 mm. The Murata microconverters employ an open-frame construction to aid thermal performance.

The TPS82740 from Texas Instruments packages a step-down converter for wearables into a SiP measuring 2.9 mm x 2.3 mm that includes the necessary passive components, arrayed on the top surface of the open-frame package. Step-down microconverters offer the ability to switch from pulse-width modulation (PWM) mode at high load into an energy-saving pulse (PFM) mode. The TPS82740 uses a novel control scheme to reduce quiescent current to just 360 nA. Supporting output currents up to 200 mA in pulse-width modulation mode, the device switches into a low-consumption pulse mode when the load falls to below 10 µA.

The DCS-Control mechanism in the TPS82740 combines hysteretic and voltage mode control. The controller is built around an AC loop that senses the output voltage. A comparator uses that voltage to set the switching frequency, which is constant for steady-state operating conditions, and provides immediate response to dynamic load changes. In order to achieve accurate DC load regulation, a voltage feedback loop is used. If the load current decreases, the converter enters power-save mode to improve efficiency, with the switching frequency varying almost linearly with the load current. In pulse mode, the device generates a single switching pulse to ramp up the inductor current and recharge the output capacitor, followed by a sleep period where most of the internal circuits are shutdown to cut current consumption. During this time, the load current is supported by the output capacitor. 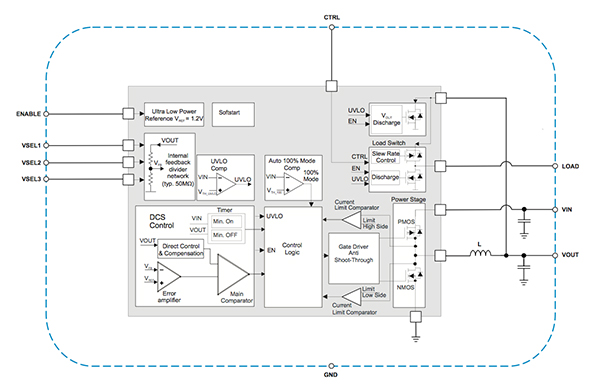 By taking advantage of advances in SiP technology as well as control algorithms, manufacturers are helping to enable a new generation of wearables that offer longer autonomy by allowing more space for the vital battery as well as through better overall efficiency.