Demand for optoelectronics, sensors, and discretes will rise, and worldwide revenue for the devices will surpass $61 billion this year. 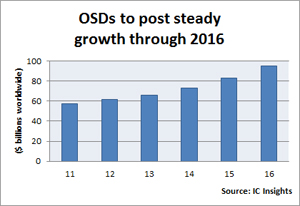 Solid-state lamp sales, which grew 16 percent in 2011 on the strength of high-brightness LEDs, are expected to rise just 10 percent in 2012 primarily due to price erosion from a buildup of inventories, according to the research firm.

CMOS image sensors are also expected to see another wave of strong growth from new imaging applications and machine-vision designs, which will include automotive safety systems and intelligent surveillance networks.