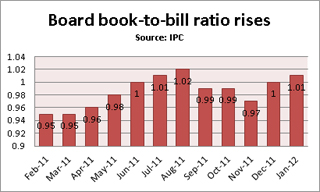 “The good news is that rigid PCB orders are up and the book-to-bill ratios for both rigid and flexible circuits improved again this month. They are now just above parity, which suggests a return to modest growth in the new few months,” Starr noted.

The combined rigid and flex industry book-to-bill ratio in January 2012 was 1.01 up slightly from 1.00 in December. A book-to-bill ratio of 1.01 means board manufacturers received $101 in new orders for every $100 of boards they shipped.

Rigid PCBs represent an estimated 89 percent of the current PCB industry in North America. Flexible circuit sales typically include value-added services such as assembly, in addition to the bare flexible circuits.