New orders for semiconductor equipment fell in June compared to the previous month. 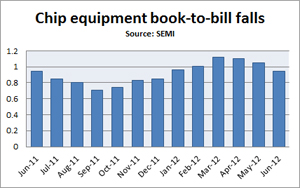 The three-month average of worldwide bookings in June 2012 was 5.5 percent lower than the June 2011 order level of $1.54 billion, SEMI reported.

“Following seven months of increases, the three-month average bookings declined in June and likely reflects some slowing in investment plans attributed to weaknesses in the broader economy,” said Denny McGuirk, president and CEO of SEMI. However, McGuirk added that while orders have declined, equipment spending this year will continue to be directed towards advanced technologies in wafer processing and packaging assembly.