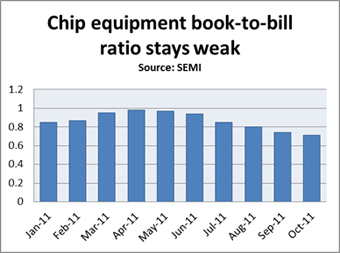 While the semiconductor book-to-bill ratio increased slightly from September, the ratio remains well below 1.00 indicating sluggish demand for equipment by semiconductor suppliers.The semiconductor industry has cut back investing in new equipment as both shipments and new orders for new chip equipment declined in October, according to trade association SEMI.

The three-month average of worldwide billings (shipments) in October 2011 totaled $1.27 billion, a 3.6 percent decrease from September when $1.31 billion of equipment shipped.

The book-to-bill ratio for equipment was 0.74, up slightly from 0.71 in September. That means equipment manufacturers received $71 in new orders for every $100 of orders that they shipped in October.

“The recent period’s billings and bookings reflect the slowing capital investment in the industry that has been evident throughout the year,” said Denny McGuirk, president and CEO of SEMI. He added that while chipmakers overall have reduced spending, investment in equipment for NAND flash and sub-30 nm process technology is rising.