The book-to-bill ratio for equipment also declined in October. 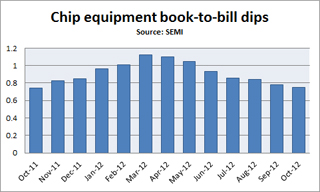 The three-month average of worldwide billings (shipments) in October 2012 was $986.5 million, down 15.3 percent from September when shipments were $1.16 billion.

“Semiconductor industry investments remain muted as the industry enters the fourth quarter,” said Denny McGuirk, president and CEO of SEMI. He said that investments in leading-edge technologies will continue to drive spending in the near-term. There will be a clearer picture of the 2013 outlook over the next several months when chip companies announce their plans for capital expenditures, according to McGuirk.

The SEMI book-to-bill ratio was 0.75 in October, down from 0.78 in September. A book-to-bill of 0.75 means that equipment manufacturers received $75 in new orders for every $100 of orders that they shipped in the month.