Security sensors are often plagued by short battery life. By combining a low-power wireless protocol with a low-power processor, this doesn’t have to be a problem.

Broadband service providers (BSPs), such as cable and telecom companies, are preparing to roll out residential security services — based on the ZigBee wireless specification — to augment their current voice, video, and data services. ZigBee enables BSPs to offer a range of additional services, such as security, energy management, lighting control, and health care applications, which are known collectively as Security, Monitoring, and Automation (SMA) services.

Ember Corporation is a leader in low-power, wireless networking solutions based on the ZigBee protocol; it has developed industry leading solutions for a variety of low-power ZigBee devices in addition to security sensors, including gas meters, door locks, and battery-powered thermostats. iControl is the leading provider of SMA solutions that enable BSPs to roll out next-generation services to their customers. In addition to contact sensors, iControl’s SMA Platform integrates a wide variety of ZigBee sensors, including motion sensors, smoke alarms, glass break detectors, CO detectors, key fobs, wireless keypads, garage door openers, and more.

Based on the fact that the average residential security system is used for seven years, BSPs typically require that contact sensors have a minimum of three years of battery life for an initial product offering, and a roadmap leading to battery life spans of seven to ten years.

Through collaborative development work, Ember and iControl have optimized the sensor and radio operations most critical to battery life and have projected a battery life well over three years. These results were achieved through iControl’s utilization of Ember’s industry-leading EM357 ZigBee System-on-Chip (SoC), fine-tuning of iControl’s security sensor network operation, and software optimizations in Ember’s ZigBee software.

Looking ahead, Ember has identified a host of other software optimizations that will push iControl’s contact sensors well into a battery life span of over ten years.

The award-winning SMA Platform developed by iControl pairs its open, technology agnostic software infrastructure with the industry’s only “All-In-One” SMA TouchScreen — combining an alarm system, communications gateway, and home automation platform into one device. The components include an SMA TouchScreen console, a variety of security sensors, and easy integration with third-party devices such as thermostats, lighting controls, and door locks. Ember’s ZigBee software provides the two-way wireless networking infrastructure for the entire system as shown in Figure 1. 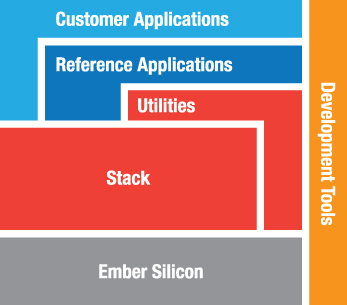 At the heart of each iControl security sensor is the Ember EM357 processor, which is based on a 32-bit ARM Cortex-M3 processor. The EM357 is the industry’s leading ZigBee processor in both current consumption and radio frequency (RF) performance.

Contact sensors are used for door and window security. They are either closed or open; a general-purpose input-output (GPIO) line on the Ember EM357 is used to sense the state of the switch. The double-throw switch draws no current until it senses the door or window opening or closing. During deep sleep, the sensor consumes only 0.65 μA, which comes from the power used by the EM357 to perform the periodic data polls. 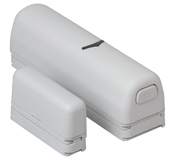 When calculating battery life, it is necessary to understand the four factors that drive power consumption:

Every activity that the security sensors perform falls into one of two types of operating states: steady-state operation or periodic events. This section explains each of these operating states and how the average current consumed for each is measured.

Steady-state operation is the normal idle state with minimal current drain while the sensor is sleeping. The current draw is consistent, and energy use can best be expressed accurately as μA. In calculating battery life, two different states of operation must be considered:

Periodic events occur at various intervals during operation; thus their current draw cannot be measured directly as it can be with steady-state events. Instead, the total energy consumed during the event is measured in μC and then converted to average current based on the event frequency.

The following equation shows this calculation:

There are two types of periodic events:

Each security sensor has a sensor and a radio; both components have different parameters that affect battery life. These parameters are calculated in either current consumption or energy consumption; the differences will be explained later in this section. Table 1 summarizes the radio and sensor parameters determined by Ember and iControl.

Three measurement units are used to develop the sensor battery life calculations: μC, μA, and mAh. Per Table 1, radio and sensor events are expressed in either μA or μC, depending on whether steady-state current was being measured (μA) or the current associated with an event of a specific time interval was being determined (μC). The overall lithium battery capacity is expressed in mAh.

The events measured in coulombs can easily be converted to mAh. One coulomb (C) equals one amp second (As). A coulomb represents the number of electrons that flow through a circuit at one amp of current each second. For example, if each data poll is 200 μC, and the event happens one time per second, the average current is 200 μA.

Self-discharge is a phenomenon in batteries in which internal chemical reactions reduce the stored charge of the battery without any connection between the electrodes. Self-discharge decreases the shelf-life of batteries and causes them to have less charge than expected when actually put to use. To model self-discharge, the team added a continuous self-discharge current of 3.24 μA.

One way to look at energy consumption is to think of the battery as a tank of water, the volume of water representing the total capacity of energy available for use. Water is emptied through a pipe and faucet attached to the tank—flowing at a certain rate, which is similar to the current flow of a circuit drawing on the energy of a battery. Anything that can be done to reduce or interrupt this flow will extend the time that water remains in the tank (or energy remains in the battery).

The life of a security sensor battery is calculated by dividing the battery capacity (expressed in mAh) by the total average current (expressed in μA). This formula is shown below:

The total average current is the key factor; it is a sum of all the events, both steady-state and periodic, and the battery self-discharge. This formula is shown below, where I represents current:

The “Technical Background” section laid the groundwork for all the work devoted to measuring and calculating each of these variables. The following sections provide the actual values used in these formulas to determine the battery life for the contact sensors.

The total average current equation is as follows:

The total number of events per day was estimated to be 100. This value is defined by the application, but this variable could be adjusted to accommodate different security scenarios. Similarly, the data poll rate was set for once every 27 minutes, or 53 polls per day.

Table 2 shows each of these events and their corresponding values.

Using the values in the Table 2:

To calculate the battery life, apply this formula: 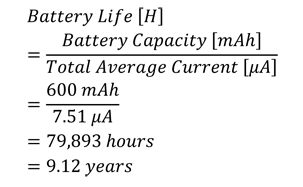 Thus, Ember and iControl achieved the initial goal of obtaining more than three years of battery life for the contact sensor based on technology currently available to roll out to consumers.

Ember and iControl have partnered to develop sensors to enhance SMA Platform capabilities and to meet the requirements of broadband service providers. The results of this collaboration, as demonstrated in this white paper, provide sensor battery life spans well suited to the practical maintenance considerations in a typical home security environment.

Extended battery life is achieved by optimizing all parameters associated with current and energy consumption. Ember’s product roadmap contains a variety of software optimizations aimed at improving battery life for all battery-powered ZigBee devices. Moving forward, Ember, and iControl are committed to working together with the goal of achieving security sensor battery life in excess of ten years in the near future.

Further inquiries on the practical and technical considerations of deploying a full-featured home security system on an SMA Platform are welcome. For more information, contact either Ember or iControl directly.