Optical networking is the key to the development of broadband Internet services. The optical fibers that interconnect large-scale switches can transfer gigabits of data per second, and improvements in photonic control are steadily increasing that peak bandwidth. To maximize the available bandwidth of an optical fiber, manufacturers used dense wavelength division multiplexing (DWDM) in which multiple colors of light are transmitted through the fiber simultaneously. Tight control over the color emitted by each laser is crucial as, by maintaining closer tolerance values, it is possible to squeeze more channels into a given length of fiber. As the cost of digging trenches and laying cables will generally exceed that of buying more laser drivers and amplifiers, maximizing the throughput of the fiber is key. 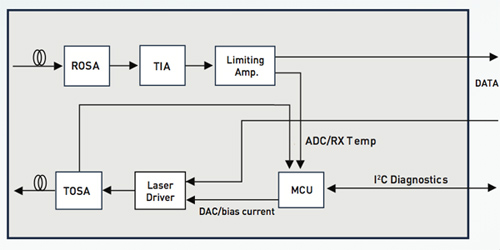 
The temperature of the laser diode is critical in maintaining a constant wavelength, so it must be controlled closely. This means controlling the temperature within ±0.1°C, while driving the laser diode with as much current as it can handle to provide a high enough output power to deliver data over long distances without external amplification.

However, the power requirements of the laser diode itself make this harder to achieve as the higher levels of energy required result in heat dissipation, which will tend to heat the laser diode. This, in turn, pushes the laser output color away from its target.

One way to address the self-heating problem is to mount a thermoelectric cooler (TEC) inside the laser-diode module. The TEC is a device that uses the Peltier effect. It typically comprises two kinds of materials and transfers heat from one side of the device to the other while a DC current is forced through it. The side from which heat is removed becomes cold. Contrastingly, the side to which heat is moved becomes hot. When the current reverses its direction, the previously cooler side heats up and the previously hotter side begins to cool. The cooling effect of the TEC is controlled by the amount of current that passes through it.

A TEC has no moving parts or working fluids, so it is very reliable and can be very small in size. TECs are used in many applications that require precision temperature control, including optical modules. The current through the TEC, as well as the pump laser-diode current, must be precisely monitored and controlled.

Closed-loop control is often used to achieve the necessary degree of accuracy in determining laser output color. As there are two factors in play, the temperature of the laser and the TEC current needed to maintain a consistent module temperature, two control loops will be needed. These two loops are typically nested with the outer loop responsible for controlling laser temperature. The inner loop focuses on the TEC current.

Figure 2: The use of nested control loops for TEC control.


The first requirement is to set a target temperature for the laser module based on the desired output color. The system may incorporate a table of calibrated output values and temperatures to allow a high degree of programmability. A thermistor or similar temperature-sensing device is placed as close as possible to the laser diode and relays the sensed temperature to the outer loop controller. The difference of the target temperature and the actual temperature is the temperature error, which is used to drive the control loop.

It is possible to implement the necessary loop controllers using analog circuitry. The temperature shifts tend to be slow and it is relatively easy to build a stable loop-control circuit using analog discretes. However, the analog implementation can demand a large number of components, which will take up board space that a module design may not be able to spare.

As the emphasis is on high-density hardware to maximize use of optical fibers, board space is now at a premium. Setting of the target temperature is through changes in component values, which reduces flexibility. A further problem with the analog approach is the demand for tight tolerances in the core components in order to maintain fine-tuned control tends to increase cost.

An alternative is to use a microcontroller to capture sensor readings and process the calculations needed to implement the control. This reduces the number of components needed and also makes the control parameters more accurate and repeatable. In addition, it is easier to modify the firmware to accommodate new applications than it is to modify discrete components. A key advantage of a processor-based system is that it can provide additional information to management systems, important in maintaining control over large-scale networks.

Parameters such as optical signal-to-noise ratio, laser temperature, and laser current, among others, can be reported back to the system’s own management unit and relayed to central systems to support long-term monitoring. For example, if key parameters begin to drift, alarms set by the management system can organize preventive maintenance.

TEC loop and thermal control is based on digital filtering algorithms. The two loops are updated periodically based on their respective set points and feedback signals. Since the thermal loop is the outer loop and has longer response time, it has a longer update period. The TEC current loop, comparatively, is the inner loop and needs a shorter update period. Periods of around 1 ms for the TEC current loop and 10 ms for the thermal loop tend to work well. It is important to keep the update period consistent, which can be achieved using a programmable timer, a function found on many microcontrollers. The timer can be set to trigger every 1 ms, or whatever the inner loop requires. A simple counter then ensures that the thermal loop is updated every ten iterations of the TEC-current loop, or at any other appropriate ratio.

Microcontrollers suitable for the application are available as general-purpose parts, or as products designed specifically for the purpose. Members of the Texas Instruments MSP430 family, such as the FR5738, can provide good support for optical-module applications. It includes 16 Kbytes of ferroelectric memory for low-power code and configuration data storage. Based on a 16-bit processor core, the MSP430FR5738 includes a 14-channel, 10-bit ADC with PWM output timer to drive a power-supply circuit that can feed the required voltage to the TEC circuitry. Also included is a comparator and reference-voltage generator that can be used to provide bias voltages to circuitry such as voltage dividers.

To support communication with the system’s management processor, the part includes two serial ports, one of which can be configured for use as an I²C or SPI channel; the other can operate as a UART or SPI port. Other parts in the F57xx family offer various combinations of ADC configuration and memory sizes.

An example of a part specifically designed for optical module control is the DS4830 from Maxim Integrated. The DS4830 is a 16-bit microcontroller with the resources required to implement fine-grained TEC control. The microcontroller includes a 13-bit analog-to-digital converter (ADC) with a 26-input multiplexer, and an eight-channel, 12-bit digital-to-analog converter (DAC), which can be used to bias the voltage divider employed by the module’s thermistor. To provide high-resolution digital control over current levels when driving an H-bridge power-converter circuit directly, the DS4830 employs 10 pulse-width-modulation (PWM) channels, each capable of 12-bit resolution. For code and data storage, the part has 32 Kword of Flash memory and 1 Kword of SRAM. To support the arithmetic needs of closed-loop control, the 16-bit processor core of the DS4830 includes a single-cycle multiply-accumulate unit (MAC) with a 48-bit accumulator.

Direct connection of diode-connected transistors, used as remote temperature sensors, is supported by the DS4830, as well as expansion to a virtually unlimited number of external digital temperature-sensor ICs using the on-chip master I²C interface. An independent slave I²C interface facilitates communication to a host microprocessor in addition to password-protected in-system reprogramming of the on-chip Flash.

Using a 32-bit ARM 7TDMI core offering up to 41 MIPs of performance, the ADUC7122 made by Analog Devices is a general-purpose microcontroller with the horsepower required to control multiple optical modules if the application demands it. The ADUC7122 includes a 1 Msample/s, 12-bit data-acquisition system, incorporating multichannel ADCs, 12 voltage-output DACs, and Flash and electrically erasable non-volatile memory on a single chip. The ADC can handle up to 13 inputs, operating in single-ended or differential-input mode for higher accuracy. The device has its own low-drift band-gap reference, temperature sensor, and supply voltage monitor. To communicate with host processors, the part has two I²C channels that can be individually configured for master or slave mode. An SPI interface supporting both master and slave modes is also provided.

Silicon Labs’ low-power 8051-based microcontrollers, such as the C8051F367, have been used in a number of optical modules. The microcontrollers are available with processor speeds up to 100 MIPS and memory capacity of up to 128 Kbyte of Flash EEPROM in packages as small as 2 x 2 mm. The F367 and other members of the family include hardware 16- x 16-bit MAC to assist with the arithmetic requirements of closed-loop control and digital filtering.

To support the needs of optical-module temperature control, the C8051 parts include a precision temperature sensor as well as 10-bit or 12-bit ADCs with differential mode inputs and a 10-bit DAC or, in the case of the F411 and F413, a 12-bit DAC, providing designers with a choice over the degree of control that the TEC has on thermal output.

Thanks to their range of on-chip peripherals, microcontrollers offer a flexible way of supporting the requirements of advanced DWDM optical networking systems whether they are general- or special-purpose parts.