A look at LED drivers such as Allegro MicroSystems’ A6263 and TI’s TPS92690 for automotive lighting applications including LCD display backlighting.


As more automotive manufacturers transition to LED lighting to leverage the technology's efficiency and power savings, next-generation LED drivers are delivering features that give automotive lighting designers new ways to optimize their designs for performance and size. These features range from adjustable switching frequencies and current-sense threshold to separate pulse width modulation (PWM), and analog outputs that interface with different dimming control methods and current matching without ballast resistors.

Interior and exterior automotive lighting is one of the fast-growing markets for LED driver ICs, according to IMS Research (now part of IHS Electronics & Media). Interior applications include LCD display backlighting, navigation displays, infotainment, and instrument clusters. They are also used for ambient, reading, footwell, and trunk lighting. A major exterior application for LED drivers is rear and brake lights, according to IMS.

This article will examine LED driver examples that address many of these applications. The examples include Allegro MicroSystems' A6263, A6269, and A6268, as well as Texas Instruments' TPS92690.

Allegro MicroSystems, Inc. has developed two- and four-channel LED drivers for automotive interior lighting. The A6263 (Figure 1) is a linear, programmable current regulator that delivers up to 100 mA from each of four outputs to drive arrays of high-brightness LEDs. Applications for these driver ICs include map and dome lighting and exterior accent lighting. 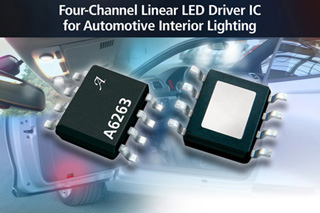 A single reference resistor sets the regulated LED current from each output. Ballast resistors are not required to match current in each string. “Driving LEDs with constant current ensures safe operation with maximum possible light output,” according to Allegro.

The device provides protection against common faults including LED string shorted to GND, single or multiple LED shorts, LED string open, IC pin open/short, and overtemperature. If one LED string is open or shorted to ground, that string is disabled, while the other LED strings continue to work.

The drivers include a temperature monitor to reduce the LED drive current if the chip temperature exceeds a thermal threshold. Allegro says the thermal de-rating threshold can be adjusted or disabled.

Allegro's two-channel A6269 (Figure 2) driver is a linear, programmable current regulator that can drive two high-brightness LED strings at up to 200 mA each. This device can be used in interior-lighting applications such as map and dome lighting, glove box, vanity mirror, door (puddle lamp), and trunk lights. 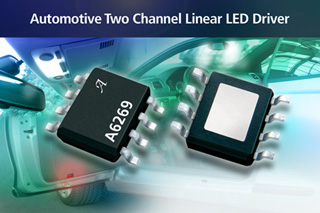 Like the A6263, a single reference resistor sets the A6269’s regulated LED current from each output, and ballast resistors are not required to match current in each string. It also incorporates a temperature monitor to reduce the LED current if the temperature rises above the adjustable thermal threshold.

Key features include dual control pins for both switch (on/off) and master control (on/off/dim up/dim down) signals, and short detection to protect the LEDs and the device during a short-to-ground at any LED output pin. When the short is removed, the output automatically resumes the regulated current.

Allegro has added an automotive-grade, high-current LED driver to its portfolio. The DC/DC converter controller provides a programmable constant-current output for driving high-power LEDs in series. Automotive applications for the A6268 (Figure 3) include LED headlights, daytime running lights (DRL), and fog lights. This driver IC may also be used in industrial applications.

The A6268 operates from a wide input voltage range, making it suitable for start/stop designs as well as handling double-battery and load-dump conditions, says Allegro. It is also designed to cut costs by using an external logic-level MOSFET and minimum additional external components.

The device's maximum LED current is set with a single external sense resistor and can be modified using a current reference input. Direct PWM control is available through the enable input, which also provides a shutdown mode.

Offering design flexibility, the DC/DC converter can be configured as a ground-referenced boost converter or a supply-referenced boost converter to provide buck-boost capability. The benefit of the buck-boost topology is it ensures no leakage path through the LEDs when in shutdown and no in-rush current at power-up, according to Allegro. In addition, a programmable switching frequency between 100 and 700 kHz minimizes EMI/EMC and AM band avoidance.

Key features include integrated diagnostics and two fault outputs that give indication of VIN and VREG undervoltage, chip overtemperature, output open circuit, LED short circuit, and LED undercurrent. The part can be configured to provide short-to-supply and short-to-ground protection for the LED connections, as well as LED overcurrent and shorted LED string protection. A unique feature, Allegro says, is the device's capability to detect one or more shorted LEDs. 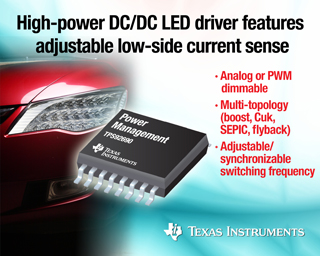 The TPS92690 N-channel MOSFET controller with low-side current sense supports step-up (boost) or step-up/step-down (SEPIC, Cuk, flyback) LED driver topologies. The DC/DC LED controller offers several features that help designers optimize their systems, according to TI. These include an adjustable switching frequency (up to 2 MHz) and current-sense threshold that allow designers to optimize LED drive electronics for small size, high efficiency, or a balance between both. Other optimizing features include separate pulse-width modulation (PWM) and analog inputs interface with common dimming-control methods to adjust LED current or implement thermal foldback.

The TPS92690 also features an internal oscillator that sets the switching frequency of the converter, but TI says it can be overdriven by an external clock for synchronizing switching frequencies with other converters in a design. Thanks to the device’s low-side current sensing, low-EMI topologies can be used such as the Cuk converter, while still maintaining a single-wire connection to the LED load.

As automotive makers transition to LEDs for both interior and exterior lighting to gain efficiency and power savings, LED driver manufacturers are developing a variety of devices that provide features that enable them to optimize their designs. These features range from the capability to detect multiple shorted LEDs, to adjustable switching frequency and current sense threshold to leverage size and efficiency to meet their specific applications.