The development directions of LCD and OLED display approaches, both destined for wearable display applications, and the state of the art in OLED displays.


Head-up and close-to-eye displays, predominantly destined for the avionics and military markets may finally emerge as a viable proposition thanks to LED and OLED technology. In the commercial world, high-profile launches of products such as Google Glass are giving more credence to the concept of head-up displays (HUDs) and head-mounted displays.

Early attempts at cost effective, wearable HUDs have failed primarily either because the unit was too bulky and heavy to be practical, or the display was not bright enough to operate in sunlight.

Two approaches are under development to address the display lighting challenge. The first, from the US, is a conventional but small LCD screen with LED backlighting. The second, from Europe, uses OLED (organic LED) display technology, which obviates the need for LED backlighting.

This article will outline the development directions of these two approaches, both destined for wearable display applications. It will then focus on the state-of-the-art in OLED displays, explaining how light is produced and the advantages of this approach. The current range of NHD alphanumeric and graphics OLED display units available from Newhaven Display International will provide a reference point.

Although not yet in the form-factor required for HUDs and eyewear, the Newhaven displays show the potential of the technology for this type of application. A demonstration board (NHDEV) is also available to allow designers to evaluate the products.

According to Transparency Market Research¹ in its latest report on wearable technology, the market to 2018 is forecast to grow to $5.8 billion, giving an impressive CAGR of 40.8%. Opportunities for displays, particularly flexible displays, in the wearable market are seen primarily in the infotainment and military/aerospace sectors. With the advent of technologies such as smart watches and smart glasses, TMR expects the infotainment sector to take over as the leading revenue generator in the wearable technology market by 2018.

The essential criteria for the success of wearable technology include compactness, portability, flexibility and low power. The fast adoption of such technology among young consumers is a particularly strong driver in the infotainment sector, while the obvious benefits of health monitoring will continue to stimulate growth in the medical and well-being segment. 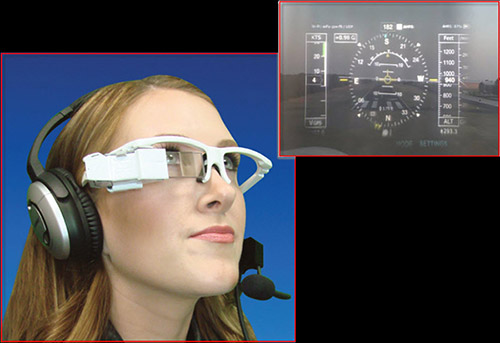 With a technical background in designing display-based products for the military, the developers were well aware of the shortcomings of current products. Apache helicopter pilots, for example, use a rather bulky helmet-mounted monocle design for displaying targeting data, and cost is prohibitive. Inspired by Google and its competitors, developing a small, color LCD screen that fitted onto standard glasses, and cheap enough for the consumer market, Aerocross became convinced that it could build a viable head-up display. The key was to overcome the physical challenge of constructing something lightweight that could be worn easily. The second challenge is the design of low-cost optics to make the end product affordable.

The first prototype, taking a monocular approach, features a miniature LCD with LED backlighting, a design already proven in flat-screen TVs. Light from the image travels through an optical module that focuses the light at infinity, and injects it into an optical waveguide built into the glass or polycarbonate lens of the glasses. Trials have demonstrated that the majority of people can see the image clearly. However, the developers say, there will always be a small percentage of the pilot population who will be unable to adjust to near-to-eye displays, or who will suffer from nausea and/or eye fatigue.

The final product will incorporate an image processor that accepts data through a wireless link to remote sensors or digital devices. Although the prototype display operates in full sunlight, the company is working on increasing the brightness by upgrading the backlighting for the LCD.

An alternative approach, under development at the Fraunhofer Centre in Dresden, Germany, is the use of an OLED material to produce a high brightness (5000 cd/m²) microdisplay for data glasses. The orthogonal photolithography process for patterning OLED materials on 200 mm CMOS backplanes should enable mass market, low-cost production.

The high brightness is sufficient, the developers claim, for augmented reality applications where the virtual image has to blend in smoothly with the daylight environment. Applications envisaged for the data glasses include surgery and other medical or scientific procedures that require access to reference data on a regular basis. 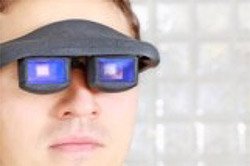 Fraunhofer COMEDD has developed binocular interactive data eyeglasses using its OLED microdisplays (See Figure 2). The user perceives his environment as normal, but additional information is presented on the microdisplay. The device can display and capture images at the same time, such that contextually relevant information can be constantly presented on the display, while simultaneously recognizing user interaction. Such interaction may be by eye movement or expression.

A comparatively recent technology, organic LED displays have the primary advantage that they operate without a backlight, enabling them to be thinner and lighter than conventional LCDs. Recent OLED developments generating transparent or semi-transparent contacts on both sides of the device can greatly improve contrast, making it much easier to view displays in bright sunlight. Other advantages include faster response times, a wider viewing angle and improved color appearance, including the ability to show true black.

With the introduction of scalable mass production methods, production costs, which were once a barrier, can potentially be lower than conventional LCDs. In addition, OLED displays typically consume less than half the power of an LCD that is displaying a predominantly black image. For the majority of other display applications, OLEDs consume 60 to 80% the power of an LCD.

In construction, OLED displays are made up of a layer of organic material placed between two conductors. These two conductors (an anode and a cathode) are then sandwiched between a glass top plate (seal) and a glass bottom plate (substrate) (See Figure 3).

When an electric current is applied to the two conductors, the organic material produces a bright, electro-luminescent light. When energy passes from the negatively-charged layer (cathode) to the anode layer through the organic material, electrons move to the emissive layer from the conductive layer. The ‘holes’ that remain in the conductive layer ‘jump’ to the emissive layer and recombine with electrons. As a result, extra energy is released as light that is visible through the outermost layer of glass.

In order for OLEDs to display color, an electric current is needed to stimulate the relevant pixels on the OLED display. The cathodes and anodes are arranged perpendicular to each other to form a matrix of pixels. The electric current applied to the selected strips of anodes and cathodes determine which pixels are activated and which pixels remain in the off state.

Each pixel is divided into red, green and blue sub-pixels. By adjusting the intensity of the electric current in each of the sub-pixels differing colors and gradients can be created. The brightness of each pixel is proportional to the amount of applied current.

Newhaven Display International offers a range of OLED display modules for character and graphics applications. Although not yet appropriate for upcoming wearable applications, such as data glasses or head-mounted displays, Newhaven’s displays are already showing the potential of OLED technology.

The NHD-0216KZW is one of the smallest standard size character displays in the company’s range, measuring just 80 x 36 mm and only 10 mm in depth. Designed to be a compatible replacement for LCD or VFD modules, it is available in three models with blue, yellow or green two-line, 16-character displays. They use serial or parallel MPU interfaces, feature LCD-compatible instructions and include four built-in font tables.

Full color OLEDs are also available. The NHD-1.27-12896UGC3 measures 45 x 45 x 5 mm, with 128 x 96 pixels displaying 262 k colors. These 18-bit color passive matrix displays, with a 160o viewing angle, are claimed to present sharper and crisper images when compared to LCDs, and faster and smoother graphic animations due to the fast 10 µs response time. The all-in-one low-power design includes a module containing all the necessary logic, including controller with built-in sleep mode. The unit requires just one interface power supply (3 or 5 V).

A development board, NHDev, is also available for evaluating or prototyping Newhaven’s character and graphic OLED displays. The board has been pre-programmed to support displays in the range. Based on the STM332F103 Cortex-M3 microcontroller, the board includes an SD card with preloaded images and text files.

Without the need of a backlight, OLED displays can be made much thinner, and ultimately, flexible, making them ideal for wearable applications. Low power, high contrast, fast response time and daylight viewing are additional desirable features for devices such as data glasses and head-mounted displays. Finally, low cost, high-volume manufacturing processes will make OLEDs commercially viable not only for wearable devices in consumer and automotive infotainment applications, but also in the medical and avionics sectors.