Organic light emitting diode (OLED) displays have been slow to catch on because of relatively high prices and restricted size. But a recent fall in cost and inherent power savings are bringing the technology to the attention of design engineers.

Organic light emitting diode (OLED) displays have been slow to catch on because of relatively high prices and restricted size. But a recent fall in cost and inherent power savings are bringing the technology to the attention of design engineers.

Patented by Eastman Kodak and Sanyo in the early 1980s, OLEDs are formed by sandwiching organic (carbon-based) films between two charged electrodes, one a metallic cathode and the other a transparent (typically glass) anode. 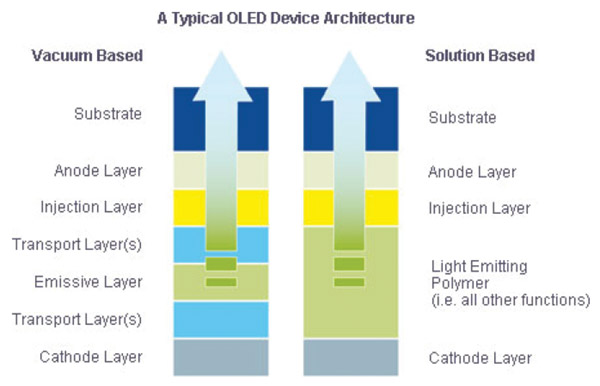 When a voltage is applied to the OLED, the holes and electrons recombine in the emissive layer and emit a photon in a process known as electroluminescence (Figure 1b). (This phenomenon is also the basis for conventional LEDs and is discussed in a previous TechZone article.)

There are two forms of OLED displays: passive matrix and active matrix. The passive matrix OLED display is formed by an array of pixels connected by intersecting anode and cathode conductors. This simple structure is suited to low-cost applications such as alphanumeric displays. A major advantage of this method is that it uses established manufacturing techniques that can easily be adapted to large-area, high-throughput manufacturing.

Active matrix displays use an integrated electronic back plane and are suitable for high-resolution applications such as videos and graphics. This type has been made possible by the development of polycrystalline silicon (“polysilicon”) technology, which, because of its high carrier mobility, enables thin-film-transistors (TFT) with high current carrying capability and fast switching speeds.

OLED pixels are Lambertian emitters, which in simple terms, means the displays appear equally bright from viewing angles up to 170°. This compares with the narrower viewing angles of LCD technology whereby the brightness of the light source typically falls by half outside of a 90° to 100° viewing angle (although some disingenuous T.V. manufacturers claim differently).

By combining small molecules or polymers with fluorescent and phosphorescent dyes in the transport and emissive layers, manufacturers ensure that the individual OLED pixels emit light of a tightly controlled wavelength, aiding color reproduction and gamut.

Unlike OLEDs, LCDs do not emit light directly, instead relying on a backlight to provide the illumination source and then modulating the light output (see previous TechZone article on LCD backlighting). This has a number of disadvantages, including increased power consumption (because the backlight has to be on all the time) and decreased contrast (the difference between “black” and “white” is limited because some light still escapes from darkened pixels).

OLED displays solve these problems by eliminating the backlight. Power consumption is typically reduced to between 60 to 80 percent of that of an equivalent LCD (a major advantage in battery-powered products) and “blacks” are truly black because the pixel is switched off. (Note that power consumption is dependent on the application though. For example, when displaying a page of black text on a white background (such as a web page), an OLED display actually uses more power than an equivalent LCD.¹)

LCDs are able to change rapidly with response times for leading consumer TVs cited in the 4 to 8-ms range. But OLEDs are much quicker; the devices are theoretically capable of responding in 0.01 ms. That’s the difference between refreshing a screen at 200 Hz or 100 kHz.

OLED technology lends itself to thinner and lighter displays because of the elimination of the backlight, and because of the relatively simple construction. These advantages offer the prospect of flexible displays, although this form of the technology is in its infancy and not yet commercially available (Figure 2). 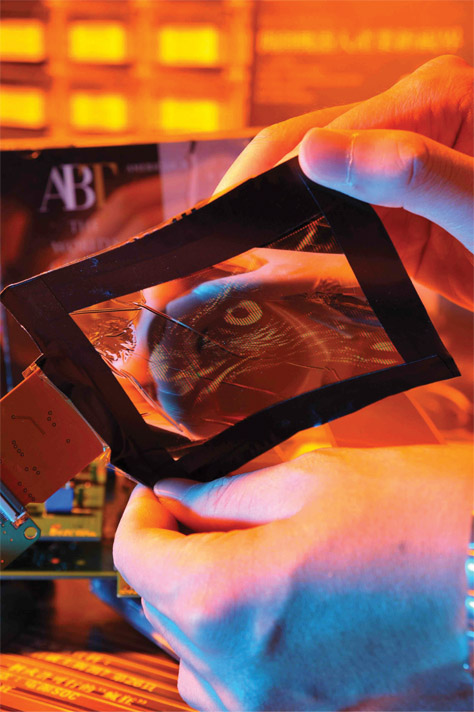 There are some drawbacks to OLEDs though, chief among which is the lifetime of the organic films. These materials used for the films are subject to chemical processes such as oxidation and gradually lose their light-emitting properties.²

Blue OLEDs, for example, have a lifetime of around 5,000 hours, which is much lower than the corresponding lifetimes of blue LCD pixels. But the technology is immature and manufacturers are working hard to extend this lifetime with some reporting that, in the lab, they have already succeeded in doubling the time that blue OLEDs can function.

An alternative approach is to add a light blue sub-pixel to the standard three-color RGB matrix. This pixel is made of longer-lived materials that satisfy most of the blue emission requirements and reduces the workload on the deep blue pixel, increasing its life and hence the overall life of the display.³

Other disadvantages include the fact that the organic materials can be easily damaged by water intrusion into the displays – demanding relatively expensive sealing – and the development of the technology is restrained by patent ownership by a small cadre of firms. This means that if a company wants to commercially develop OLED technology it has to acquire a license.

Despite being a relatively new technology, falling prices are the catalyst for the technology to be adopted for products less esoteric than the few smart phones that already boast OLED displays.

Newhaven Display, for example, is offering character and graphic type OLED displays as complete, easy-to-use modules that are a compelling alternative to LCDs.

The character OLED modules come in standard sizes and can be used as compatible replacements for LCD (or vacuum fluorescent display, VFD) modules. They use a serial or parallel microprocessor interface and feature LCD compatible instructions and four built-in font tables. 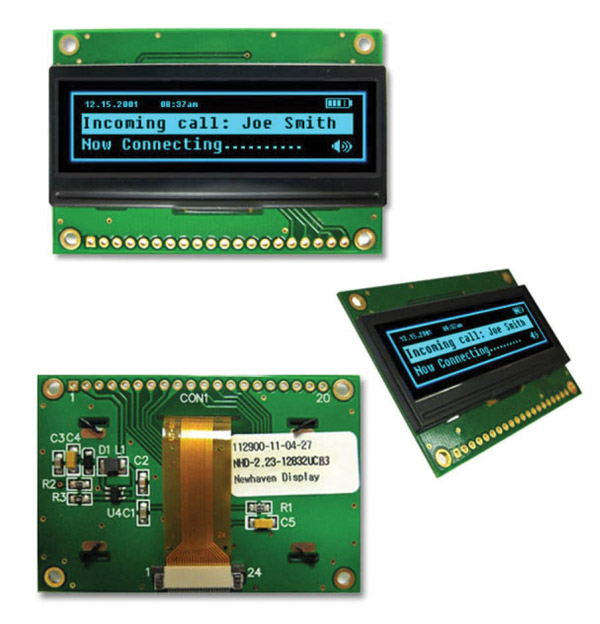 Organic Light Emitting Diodes are bright, high contrast displays that have fast response times; wide viewing angles and consume less power than conventional LEDs or LCD displays. OLED displays are self-illuminating and require no backlighting so displays are thin. Suppliers such as Newhaven Display offer character and graphic-type OLED displays as complete, easy-to-use modules. For more information, use the links provided to access product/technology pages on the Hotenda website.