As environmental concerns over traditional lighting increase and the prices of LEDs decrease, high power LEDs are fast becoming a popular lighting solution for offline applications.

IPK is the peak switch current, N is the primary to secondary turns ratio and D is the duty cycle. The IC regulates the output current by adjusting the peak switch current and the duty cycle through a novel feedback control. Unlike other primary side sensing methods that need to know input power and output voltage information, this new scheme provides much better output current regulation since the accuracy is barely affected by transformer winding resistance, switch RDS(ON), output diode forward voltage drop and LED cable voltage drop. 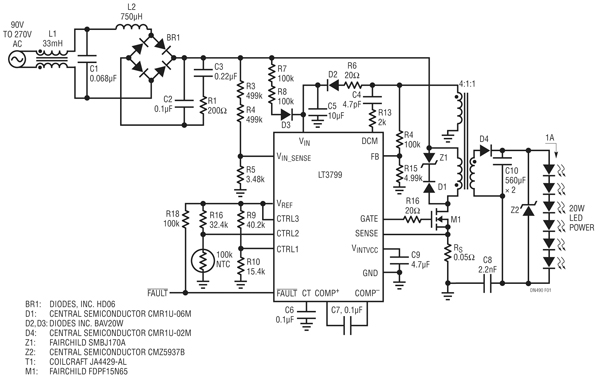 By forcing the line current to follow the applied sine-wave voltage, the LT3799 achieves high power factor and complies with IEC61000-3-2, Class C lighting equipment Harmonics Requirement. A power factor of one is achieved if the current drawn is proportional to the input voltage. The LT3799 modulates the peak switch current with a scaled version of the input voltage. This technique provides power factors of 0.97 or greater. A low bandwidth feedback loop keeps the output current regulated without distorting the input current.

When the TRIAC dimmer is in the off state, it is not completely OFF. There is considerable leakage current flowing through its internal filter to the LED driver. This current charges the input capacitor of the LED driver, causing random switching and LED flicker. Prior solutions added a bleeder circuit, including a large, expensive high voltage MOSFET. The LT3799 eliminates the need for this MOSFET or any other extra components by utilizing the transformer primary winding and the main switch as the bleeder circuit. As shown in Figure 2, the MOSFET gate signal is high and the MOSFET is ON when the TRIAC is OFF, bleeding off the leakage current and keeping the input voltage at 0 V. As soon as the TRIAC turns ON, the MOSFET seamlessly changes back into a normal power delivery device.

The LED voltage is constantly monitored through the transformer third winding. The third winding voltage is proportional to the output voltage when the main switch is OFF and the output diode is conducting current. In the event of overvoltage or open-LED, the main switch turns OFF and the capacitor at the CT pin discharges. The circuit enters hiccup mode as shown in Figure 3.


In a shorted LED event, the IC runs at minimum frequency before the VIN pin voltage drops below the UVLO threshold as the third winding cannot provide enough power to the IC. The IC then enters its start-up sequence as shown in Figure 4.

The LT3799’s output can be adjusted through multiple CTRL pins. For example, the output current would follow a DC control voltage applied to any CTRL pin for analog dimming. Overtemperature protection and line brownout protection can also be easily implemented using these CTRL pins.