Overall spending on semiconductors for wireless applications is forecast to reach $69.6 billion in 2013, a 13.5% increase over 2012.

Semiconductor spending among original equipment manufacturers (OEMs) will be most active in the wireless arena, rising by a double-digit margin in 2013 to support the ever-expanding smart phone, media-tablet and mobile infrastructure gear markets.

According to the IHS iSuppli Semiconductor Design & Spend Analysis Service, spending on wireless applications is set to rise by 13.5% this year—a total of $69.6 billion, up from $62.3 billion in 2012. It’s the highest rate of growth among the seven major application markets. Forecasts for the other markets show changes ranging from a 6.5% increase to a 1.7% decrease.

Total OEM semiconductor spending is expected to rise by 6.2% in 2013 (Fig. 1). IHS, an information and analytics provider, defines OEM spending as all semiconductor spending done directly by the OEM, or indirectly through an electronic manufacturing service (EMS) or original design manufacturer (ODM). For those companies that operate as both an OEM and semiconductor supplier, net spending was calculated only for those devices originating from the external merchant market (not for internally sourced products). 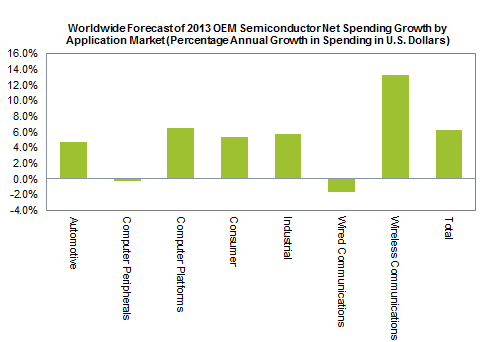 “The growth in wireless semiconductor spending this year reflects the strong and sustained consumer appeal of smart phones and media tablets—as well as the robust corporate infrastructure expenditures required to support this trend,” says Myson Robles-Bruce, senior analyst for semiconductor design and spend at IHS. “Mobile handsets continued to be the leading category for wireless semiconductor spending, but tablets are on the rise, with the new slate computers surpassing wireless infrastructure in 2012 for the first time ever.” 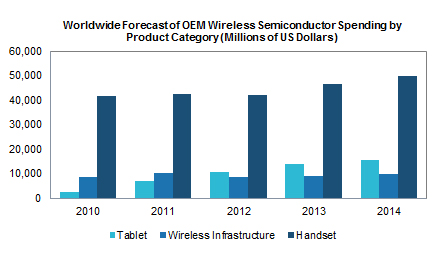 Apple and Samsung Electronics continue to be the top spenders on semiconductors for media tablets, together accounting for 75% of total dollars spent in the market. Though most media tablet sales are still concentrated in the North American region, the major manufacturers recognize more aggressive marketing will be needed in the Asia-Pacific area.

Apple still dominates media-tablet manufacturing. Many alternatives are emerging, though, particularly low-cost options. The sales impact of new media tablets that contain Microsoft Windows RT, such as those coming from Asus, Dell, Lenovo and Microsoft, will be watched closely.

In terms of semiconductor spending for overall wireless communications, IHS estimates that high year-over-year growth will be achieved by, once again, Apple and Samsung. LG Electronics could enter the fray, though, as forecasts indicate significant growth in wireless spending. In addition, rapidly emerging players are coming from China, such as Huawei Technologies, Lenovo and ZTE.

The top OEMs in the wireless infrastructure market—Ericsson, Huawei, Alcatel-Lucent and Nokia Siemens Networks—will remain unchanged in 2013, with Ericsson and Huawei fiercely battling for market leadership. Market ranking is closely reflected in the semiconductor spend analysis results for these OEMs.

Key challenges remain, though. For instance, wireless-device manufacturers will make incremental changes to their products this year. However, to ensure future growth and profitability, they must address issues and problems associated with these devices. Thus, R&D will focus on significantly improving display resolutions for tablets and smart phones, and the sound quality of mobile devices by using better noise-reduction technology. And those involved with wireless infrastructure must resolve critical connectivity issues related to network congestion, power reliability, and privacy and security.