Home » Media Library » Articles Library » OCP or SCP – That is the Question!

OCP or SCP – That is the Question!

Compare Over-Current Protection (OCP) and Short-Circuit Protection (SCP) and where each could be used within applications.


Often, many different types of protection of the power transistor, motor or any part of the system are required in motor drive applications. Current protection of the inverter is one of the crucial items. It prevents not only any potential damage of the power transistors, but also demagnetization of the motor in case a fault occurs or control becomes unstable. Over-Current Protection (OCP) and Short-Circuit Protection (SCP) are often used interchangeably, but there are differences that will be discussed in this article.

Difference between OCP and SCP 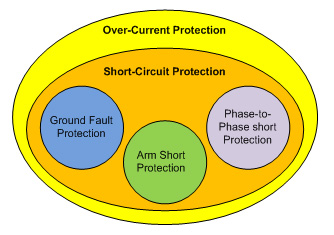 Figure 2 shows the different short-circuit modes and their current path. As illustrated in Figure 2(a), ground fault occurs when the motor winding gets shorted to the motor frame, which is typically connected to the earth ground, or sometimes when a motor cable gets shorted to the earth ground. Figure 2(b) shows arm short which refers to the case when both the high-side IGBT and the low-side IGBT turn on accidentally at the same time and very-high current flows as a consequence. Figure 2(c) depicts a phase-to-phase short which happens when motor windings from different phases get shorted. In all three cases, the magnitude of current is limited by the impedance of its current path, including the IGBT itself. 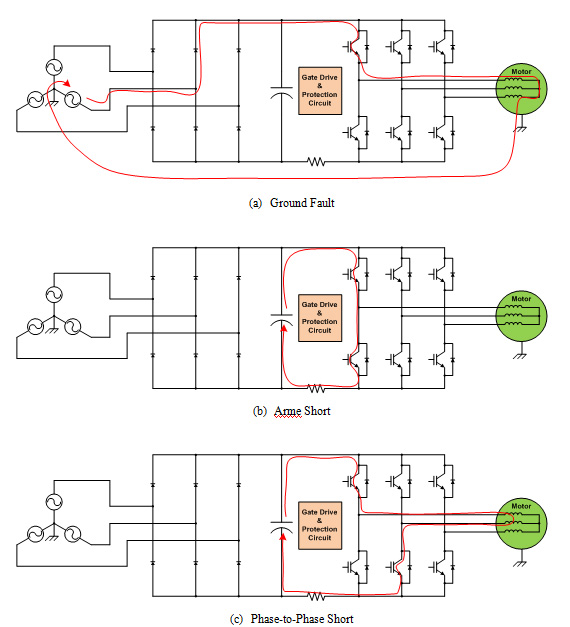 How to set the OCP level?

How to set the protection current level is a key question regardless of the type of over-current situation. To answer this question, the weakest part in the system should be identified first. In most cases, IGBT’s get damaged sooner than freewheeling diodes because over-current situations more likely occur when the power is delivered from the inverter to the motor. Then, should the OCP trip level be set at the maximum current which IGBT can handle? It depends on the control method adopted in the system. In the case of Volts/Hertz control, widely used for induction motor applications, the level of current at the start-up cannot be precisely predicted. On the other hand, if current control such as Field-Oriented Control is used, the maximum current of the motor in a specific application is well known. Adding some margin to this level would be a good reference point for the OCP level as illustrated in Figure 3. For example, a permanent magnet motor for a refrigerator with FOC has its rated current of 1 A rms, but during the initial start-up cooling period it can handle 120% overload for 10 minutes. In this case, the maximum peak current can be 1 A rms * 120% * Sqrt(2) = 1.7 A peak. Considering the overshoot of the current control with some margin, +/- 2 A can be chosen as the current feedback range in the control and 2.5 A can be set as the OCP trip level. Even if a 5 A IGBT with saturation current of 30 A is used in the inverter circuit, the current trip level does not need to be 10 A or higher. A high current trip level may cause demagnetization of the motor. If there is a fixed time of overload capability, I²T protection can be implemented to supplement OCP. 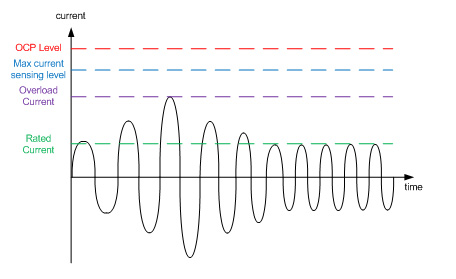 Figure 3: OCP level in relation with other current levels.

Which protection method to use?

On the other hand, SCP mainly focuses on IGBT failure. IGBTs in Fairchild’s SPM® smart power modules have superior short-circuit capability, but still may get damaged if not turned off safely within several micro seconds. Therefore, SCP should be handled by hardware with a fixed timing of a couple of micro-seconds delay, not by software. The most common way to protect an IGBT in a short-circuit is to sense the current on the negative DC bus rail by a shunt resistor as shown in Figure 4(a) and feed the voltage drop to the gate driver so that the gate driver can softly turn off the IGBT simultaneously. Turning off IGBTs in a short-circuit condition may create excessive voltage spikes and latch-up failure. Soft off is a very effective way of overcoming these issues. For inverters with a power rating above 5 Hp, selection of a shunt resistor is practically limited, and Fairchild’s SPM 2 series products adopt a sense-IGBT which has a sense emitter pin carrying a very small portion of real emitter current. Three sense emitters are tied together and channel current flows through an external shunt resistor as shown in Figure 4(b). The voltage drop can be fed to the gate drive IC in a similar manner.

One disadvantage of these methods is that ground fault current as shown in Figure 2(a) cannot be detected. Software can calculate the three phase currents and recognize ground fault if the summation is not zero. However, the response may not be fast enough to prevent IGBT damage. A magnetic core, a shunt resistor on the positive DC bus rail, and desat protection are other options to choose for ground protection. Fairchild has opto gate drivers with desat protection features. The FOD8316, FOD8318, and FOD8332 are the examples of devices with these features.

Based on the differences between OCP and SCP, and various protection schemes described in this article, a proper protection scheme which meets the application requirements should be selected wisely.