Obsolete Parts Account for More than Half of Counterfeit Components

Monitoring the status of obsolete and end-of-life parts can help reduce the risk of buying counterfeit components. 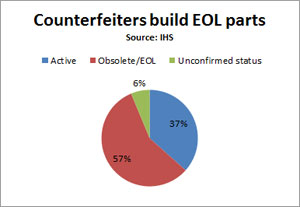 Most parts that are counterfeited are going end of life or are already obsolete.Electronics component counterfeiters are focusing on building bogus obsolete and end-of-life parts, according to a new report by researcher IHS.

Over the last 10 years, obsolete parts have accounted for slightly more than half of all counterfeit part reports, IHS reported.

A total of 57 percent of counterfeit part reports from 2001 through 2012 have involved obsolete or end-of-life (EOL) components. Another 37 percent were active parts, while the remaining 6 percent had an unconfirmed product life status, according to IHS.

“Some have said that if you can avoid all obsolete parts, you can eliminate all the risk of counterfeits,” said Rory King, director, supply chain product marketing at IHS. “But totally eliminating obsolete parts from bills of materials is quote unrealistic and technically infeasible.”

One reason is product lifecycles of components are much shorter than the products in which they are used. This is especially true for long-lifecycle or complex products such as automotive, industrial, medical, aviation, or telecommunications equipment that use once-current, but now outdated, components.

Obsolete parts are a major issue for the defense and aerospace industries. One example is the B-52 bomber, which had its first flight 1952, and is set to end its service in 2040, nearly 90 years later.

“If the demand picture changes or the end customer extends the life of a project by more than a decade, it can have the effect of creating a sudden shortage of critical parts for replacements and maintenance, forcing buyers to find new sources or to seek alternative parts,” King said.

In some cases regulation can result in fewer sources for parts. For instance, when the European Restriction of Hazardous Substances Directive (RoHS) went into effect in 2006, 20 percent of all components were discontinued above and beyond what buyers were expecting, according to IHS.

“Obsolete parts are unavoidable, "said King. Electronics buyers need to know as quickly as possible which parts are obsolete, which parts are being phased out, and when parts have become end of life (EOL) in order to mitigate costly obsolescence issues.

Buyers need to know what alternative parts they can use as replacements and which legitimate suppliers they can use for those components, King said.

He added that buyers need to “arm themselves with the right methods and tools to manage both obsolete and active critical components.” This includes knowing exactly which counterfeit parts are being circulated within the supply chain and by monitoring rising price and leadtime trends that signal attractive market conditions for counterfeiters.

With bills of materials that include as many as 30,000 parts, it is typical that 10 percent or more of these components are obsolete. With more than 50 percent of counterfeit parts obsolete, the need to “forecast obsolescence and have access to alternate part and supplier options is crucial to avoiding both obsolescence costs and counterfeit risk,” said King.