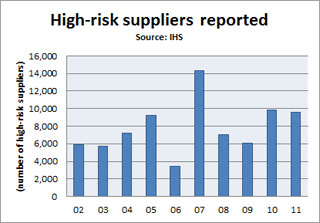 A total of 9,539 suppliers in 2011 were reported either for known involvement in high-risk, fraudulent, and suspect counterfeit-part transactions or for conduct identified by the government as grounds to debar, suspend, or otherwise exclude from contract participation. This was up from 5,849 in 2002, IHS reported.

Scrutiny into counterfeit parts and high-risk suppliers is the result of a breakdown in supply traceability and the use of unauthorized sources for critical components, reported IHS. It underscores the need for companies to use only authorized, trusted suppliers for parts.

Vicki Knauf, parts logistics expert and Haystack product manager, supply chain solutions at IHS, said it is “abundantly clear that supplier risk is real, extensive and growing.” She noted that there is a federal requirement that companies doing business with the government must screen for debarred, suspended, or otherwise excluded parties.

The Department of Defense, as well as its contractors and subcontractors, must comply with new regulations for the use of trusted suppliers and authorized sources.

“A key component of developing a secure supply chain includes the use of trusted suppliers,” said Knauf. “Pinpointing probabilities of risk and vetting high-risk suppliers is crucial to developing a resilient supply chain that fends off devious behavior.”