Nor Flash Market to Decline as Prices Fall

The NOR market increased 11 percent in 2010 because of shortages and higher prices, but will decline in 2011.

The NOR flash memory market will decline by about 6 percent to $4.6 billion in 2010, despite decent unit demand growth, according to researcher IHS iSuppli.

NOR revenue increased nearly 11 percent in 2010 to $5.1 billion because of strong demand, shortages, and higher prices. NOR shipments will rise as NOR is used in more applications, but prices will decline resulting in falling revenue for the industry, according to iSuppli.

NOR flash memory is used to store and run code in a broad range of electronics equipment, including mobile handsets, PCs, hard disk drives, DVD players, televisions, and set-top boxes.

NOR lost its share of the memory market to NAND flash, which costs less and has much higher memory capacity. This type of memory is especially useful in smartphones, according to Michael Yang, senior analyst for memory and storage at IHS.

NOR had strong growth in 2010 because suppliers cut back stock in 2009, according to Yang. When demand recovered in 2010, shortages resulted because of the production cutbacks and prices increased.

Suppliers have increased production and supply has now caught up with demand. Prices have declined and are likely to stay low or further drop later in the year.

Long term, NOR will be impacted by two trends, according to IHS iSuppli. One is the use of more serial parallel interface (SPI) NOR chips that carry lower prices compared to their parallel switch counterparts. That means less revenue for NOR manufacturers. The other trend is the shift by mobile phone handset manufacturers to use NAND flash rather than NOR. Handsets have been NOR's single largest application. 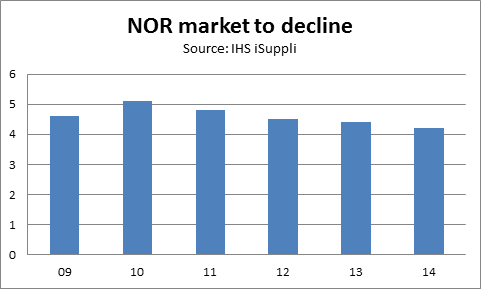 Despite decent unit growth the NOR flash memory market will decline because of falling prices.
Supplier
Product Type
Industry
Function