Resolving LED lighting issues with the use of bleeder and damping circuitry in LED drivers and controllers.

One of the biggest challenges LED lighting designers face is the dimming performance of LED lamps in TRIAC-based dimmers. In many cases, this causes flickering and reduced dimming range compared to incandescent bulbs. The problem is that TRIAC-based dimmers were designed for use with incandescent lamps, which have resistive loads. When LEDs started to be used with the dimmers, the low-current requirements, along with the non-resistive nature of the devices, caused the TRIACs to intermittently turn on and off, which creates the flickering effect.

LEDs and LED drivers are non-resistive loads, and their input current often falls below the holding current of the TRIAC in the dimmer. This causes flickering and a limited dimming range.

LED driver manufacturers have developed new solutions to solve this flickering problem. One way is by incorporating the bleeder and damping circuitry in the LED drivers. What the bleeder circuit does is to ensure that the input current is higher than the hold-up current limit of the TRIAC. The damping circuitry "damps" the current oscillation, which also contributes to flickering.

"These TRIAC wall-based dimmers were designed to work with incandescent bulbs, which are rated to operate at higher power levels and are resistive," said Rakesh Anumula, applications engineer at Intersil Corp. "When migrating from incandescent bulbs to either CFLs or LED lighting, the load isn't resistive anymore, but it's inductive or capacitive, so the dimmer doesn't behave the same way as would with an incandescent bulb."

“The result is flickering when the dimmer interacts with the input of the LED drivers,” Anumula added. "They cause some kind of resonance, which makes the TRIAC intermittently turn on/off, and this causes shimmering of the light at the output that is seen as flickering."

What’s more, since the load is now different, the dimming characteristic is a different, as well. There is not the same light intensity or light output, according to Anumula.

A passive bleeder can be used for very-low-power LED bulbs, Anumula noted. The disadvantage to this solution is that the design will take a hit in efficiency because the resistor is always on and is bleeding power.

An active solution uses a resistor and capacitor, but the resistor is only on when needed. The tradeoff is that this solution requires an active switch to turn the resistor on and off, but it delivers greater efficiency than the passive bleeder solution.

As shown in Figures 1 and 2, Intersil's ISL1903 and ISL1904 LED driver controllers incorporate a dimmer holding circuit (DHC). It is a combination of an active bleed and damping circuit. The active bleeder circuit uses a MOSFET, diode, resistor, and capacitor to provide a certain amount of holding and latching current. 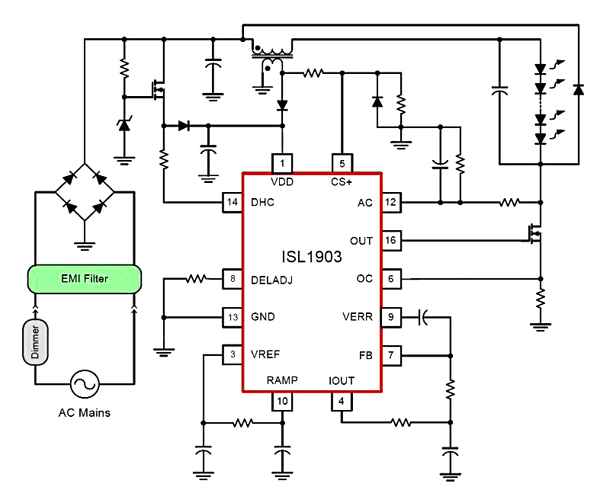 Figure 1: The ISL1903 is a high-performance, critical conduction mode (CrCM), single-ended buck LED driver controller. It may be used with DC input converters, but also supports single-stage conversion of the AC mains to a constant current source with power factor correction (PFC). The DHC pin provides a method to pre-load a TRIAC-based dimmer during the period of time when the AC is blocked, with overlap at each edge of the AC conduction period to ensure adequate holding current. DHC is an open drain FET used to control an external resistor to act as the load. (Courtesy of Intersil.) 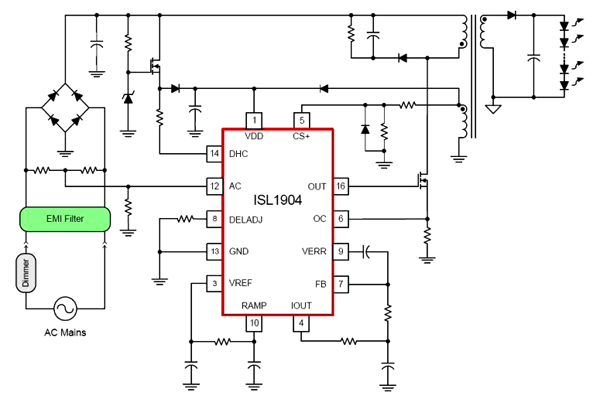 One of Texas Instruments' latest generation LED driver ICs, the LM3447 (ED: See note in D-K links section above main text), also incorporates holding or bleeder circuitry to ensure that the TRIAC has enough current. When the LED load starts getting low, the bleeder circuit can be turned on again to provide extra current so the TRIAC will stay conducting during the low conduction cycle, according to John Perry, product marketing engineer for Texas Instruments' lighting power solutions.

When a TRIAC triggers it does not need much current to stay conducting, but it often falls out of conduction; that current is fairly close to the LED load and as it further dims, it demands less current for the LEDs to a point where the dimmer can no longer conduct. Said Perry, "This is when it can start to chatter and fire and refire, which will ultimately be passed through the LED load as flicker." 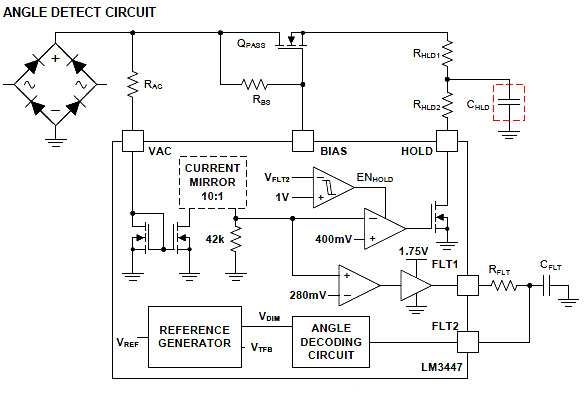 Figure 3: The Texas Instruments LM3447 incorporates a hold current circuit for TRIAC-based dimmers. The holding current from the dimmer is drawn through the flyback PFC circuit through the pass transistor (QPASS), and limited by the resistors (RHLD1 and RHLD2). (Courtesy of Texas Instruments.)

The LM3447 AC/DC LED driver, an extension of the LM3445, includes a dimmer detect, phase decoder, and adjustable hold current circuits for flicker-free dimming operation in isolated flyback LED lighting applications. The device's constant power regulation ensures constant LED power, which results up to a 10 percent improvement in efficacy across the operating temperature range of the fixture, according to TI. An LM3447 evaluation module also is available.

For buck or buck-boost topologies, designers may want to consider Texas Instruments' TPS92075 (Figure 4), which incorporates digital circuitry and digital filtering to resolve some of the dimming issues. The TPS92075 controller is designed for phase-dimmable, offline AC/DC LED lamp and downlight applications.

Figure 4: In the Texas Instruments TPS92075, when the conduction angle falls below the 70 percent threshold, the output is controlled by the DC digital reference based on the angle sense (ASNS) rise to the fall length count. To improve TRIAC dimmer compatibility, the control level clamps at the high and low range. By implementing a translation that shifts output demand higher or lower in the dimming range, it eliminates the need for hold circuitry. (Courtesy of Texas Instruments.)

TRIAC wall-based dimmers primarily cause LED lamp dimming challenges. These were designed for incandescent bulbs rated to operate at higher power levels. When the dimmer interacts with the non-resistive and low-power LED drivers, it can result in the TRIAC intermittently turning on and off, which causes the flickering effect, and because the loads are different, the light intensity or light output is diminished.

Although there are multiple ways of resolving these challenges, many LED driver IC manufacturers are starting to incorporate bleeder and damping circuitry into the LED drivers and controllers to ensure that the TRIAC has the required latching and holding current needed to keep it from misfiring. These solutions solve the dimming challenges faced by LED lighting designers, as well as ease design complexity.