Piezoelectric technology has been used for many years to create a spark when a crystal is squeezed, but recently the opposite effect is creating more interest.


Piezoelectric technology has been used for many years to create a spark when a crystal is squeezed, but recently the opposite effect is creating more interest. Now using vibration and movement can generate power to drive wireless links and electronics. The falling power consumption of silicon devices is creating more opportunities to replace batteries and provide ‘free’ power.

The Green Microgym in Portland, Oregon, for example, is using the technology to capture the energy created by the runners on special exercise machines. The electricity generated is helping the gym cut energy bills by 60 %. Similarly in Holland, Club Watt in Rotterdam is using piezoelectric technology under the dance floor. As people dance, the vibrations generate power for the building.

Those shipments will translate into worldwide annual revenue from energy harvesting enabled devices of $9.5 billion in 2015, the clean tech market intelligence firm forecasts. "Devices in settings with thousands of sensors that are diligently working to bring us information about temperature, humidity, security, machine health, structural health, and many other forms of data are becoming increasingly pervasive," said Bob Gohn, vice president at Pike Research. "In many of these applications, maintaining batteries is a major logistical and cost issue. Viable energy harvesting technology exists today and developers are fast becoming familiar with how to implement it into ever more-innovative devices."

At the moment, the energy harvesting industry is going through a galvanization period in which vendors, systems integrators, and end users all recognize that a joint approach in terms of standardization and initial market push will lead to an aggressive market acceptance curve. Pike Research's analysis indicates that the consumer market for energy harvesting will represent approximately 42 % of all unit shipments by 2015. Key applications in this sector include mobile phones, laptop computers, remote controls, portable lighting, and the established market for wristwatches powered by kinetic energy. Industrial applications, however, will represent the majority of the energy harvesting market, with a compound annual growth rate in excess of 100 % for the sector as a whole.

This demand for energy harvesting is driving more research into new piezoelectric structures, systems and applications. The three are tightly coupled – a new material opens up new applications that need new system designs.

One of the key aspects of vibrational energy harvesting is the way it can be tightly integrated into equipment. A knee brace has integrated piezoelectric materials to generate enough current to power prosthetic limbs, or even a pair of night vision goggles used by soldiers. Just one minute of walking generates enough energy to power a mobile phone for 30 minutes.

A new piezoelectric material called polyvinylidene fluoride (PVDF) has been used to create a plastic microbelt that vibrates and generates power. This can be made small enough to be able to use breathing as a way to generate power for devices.

Researchers at the University of Wisconsin-Madison have built low-voltage, near-nanoscale electromechanical devices that could lead to improvements in energy harvesting, sensing, and actuators for nanopositioning devices.

An advanced piezoelectric material using lead magnesium niobate-lead titanate (PMN-PT) exhibits a "giant" piezoelectric response that can deliver much greater mechanical displacement with the same amount of electric field as traditional piezoelectric materials. They also can act as both actuators and sensors. For example, they use electricity to deliver an ultrasound wave that penetrates deeply into the body and returns data capable of displaying a high-quality 3-D image.

Currently, a major limitation of these advanced materials is incorporating them into very small-scale devices. Chang-Beom Eom, a UW-Madison professor of materials science and engineering and physics, and his colleagues have developed a way to integrate PMN-PT seamlessly onto silicon.

"You have to lay down the right element first," says Eom. Onto a silicon platform, his team adds a very thin layer of strontium titanate, which acts as a template and mimics the structure of silicon. Next is a layer of strontium ruthenate, an electrode Eom developed some years ago, and finally, the single-crystal piezoelectric material PMN-PT. "The properties of the single crystal we integrated on silicon are as good as the bulk single crystal," he says. Eom’s team calls devices fabricated from this giant piezoelectric material "hyper-active MEMS" for their potential to offer researchers a high level of active control. 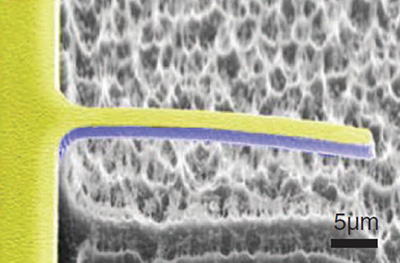 
Researchers at Princeton University have managed to grow piezoelectric materials on a flexible rubber substrate that are suitable for implantable or wearable energy harvesting systems. The crystallization of these materials generally requires high temperatures to get the best performance, making them incompatible with temperature-sensitive plastics and rubbers. The researchers overcame these limitations by using a scalable and parallel process for transferring crystalline piezoelectric ‘nanothick’ ribbons of lead zirconate titanate from host substrates onto wider flexible rubbers. This opens up a range of new ways of including power generation in systems that vibrate and move and can even be implanted into the body.

Three types of piezoelectric devices have been tested for their ability to generate power: the commonly used monolithic piezoceramic material lead-zirconate-titanate (PZT), the bimorph Quick Pack (QP) actuator, and the Macro Fiber Composite (MFC) developed at the NASA Langley Research Center in the US.

The MFC actuator is constructed using piezofibers surrounded in an epoxy matrix and covered with a Kapton shell. This allows it to be extremely flexible, as well as robust to damage and environmental conditions and more efficient in converting energy.

The Quick Pack actuator is a bimorph piezoelectric device that uses monolithic piezoceramic material embedded in an epoxy matrix. This is far less flexible than the MFC, but the epoxy shell does make it more robust than raw monolithic material.

Both the Quick Pack and the monolithic piezoceramic material PZT were capable of recharging the batteries in question. However, the PZT is more effective in the random vibration environment that is usually encountered when dealing with ambient vibrations. The Macro-fiber composite was not well-suited for power harvesting, as it was designed to be an actuator with a high voltage and very low current output. 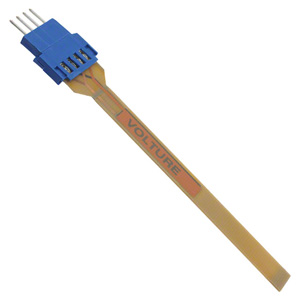 
The key for harvesting the vibrational energy with any piezoelectric material is to fully understand the vibration environment, and the best way to do this is to measure the vibration using an accelerometer. The optimum resonance point is different for different materials, and determining the requirements of the system is vital for selecting the appropriate technology.

Once the data is captured, a Fast Fourier Transform (FFT) extracts the frequency information. Often this is directly associated with the equipment, such as a 120 Hz AC motor or a 60 Hz appliance, but most applications will require some form of vibration characterization. Midé offers a standalone vibration characterization device that can be easily installed into many different vibration environments to capture data in hard-to-reach areas. A built-in timer allows the capture of many different types of vibration and a simple USB interface allows the designer to easily characterize any vibration. This can also help make sure that the crystal is not exposed to excessive vibrations that can damage the device and shorten its useful life.

However, it is also necessary to interface the power output of the piezoelectric crystal to the system electronics. This is often handled by a DC-DC converter supplying a re-chargeable battery. The design of this device is critical as the power output of the crystal is low to start with, as any losses and inefficiencies can significantly limit the performance of the system.

Linear Technology has integrated a low-loss, full-wave bridge rectifier with a high-efficiency buck converter that is optimized for such high output impedance energy sources. The LTC3588 is an ultra-low quiescent current, under-voltage lockout (UVLO) mode with a 16 V rising threshold to provide efficient energy extraction from piezoelectric transducers with high open circuit voltages. 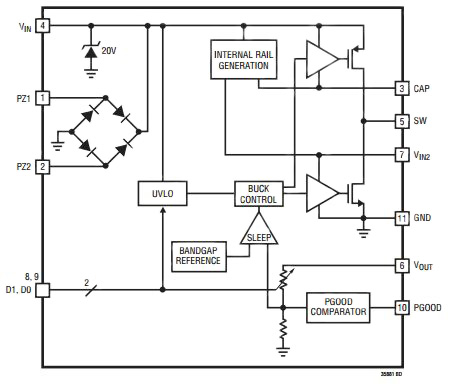 Figure 4: The Linear Technology LTC3588 for interfacing a piezoelectric vibrational transducer to storage.


Piezoelectric technologies are also being used in larger systems, even generating power from a speed bump. New Energy Technologies in Maryland in the US is still developing its technology for commercialization, and has demonstrated its ‘MotionPower’ devices in a speed bump at a Burger King drive-thru, helping to power its kitchen equipment. The technology was also tested out last November in the US city of Roanoke, Virginia, where over 500 cars drove over a MotionPower rumble strip, generating enough power for an average US home for a day.

“MotionPower can offset the city’s cost of operating traffic control devices, such as traffic signals and street lights,” said Mark Jamison, City of Roanoke Manager of Transportation. “This innovative partnership with New Energy Technologies has the potential to provide a more sustainable environment, while simultaneously conserving strained budgets of cities.”

InnaWatt in Israel is using piezoelectric pads installed under the road surface to provide the power for roadside displays and wireless communications links. The pads are installed at a depth of 5 cm under the surface when the road is built or re-surfaced, and trials have shown that it does not compromise the lifetime of the surface or reduce the efficiency of the vehicles. The more traffic that passes, and the heavier the traffic, the greater the power generated.

Perpetuum, a spin-off from the University of Southampton, has used a different approach to develop technology to convert vibrations from transport, particularly trains, into power.

These electromagnetic energy harvesters use an oscillating magnet, which traverses across a fixed coil creating a varying amount of magnetic flux, inducing a voltage. To maximize power output, the harvester is mechanically tuned to an optimized resonant frequency present within the application.

The Perpetuum FSH outputs a "load-independent" constant DC current that is the same whether measuring with a multimeter during installation or while charging a storage bank of batteries. The units are designed to last 100 years without maintenance, a phenomenal design target.

The systems have been used in a series of trials on trains in the UK to provide energy to power sensors to monitor the condition of wheel bearings. The trial showed that the vibration spectra could be correlated with faulty bearings and that this data could be transmitted wirelessly. In addition, the harvester was shown to be capable of generating 10s of mW of electrical energy, which would be suitable for powering such a system.

This opens the way for a cost-effective product to monitor wheel-bearing condition that can be installed in a few minutes, requires no external wiring, and needs minimal maintenance as the power is provided by the harvester.

Harvesting vibrational energy is an increasingly important technique for moving equipment from trains to cars, as well as for personal systems. This will contribute significantly to the explosive growth of energy harvesting over the next four years, and researchers are looking at new materials to open up new applications.

Developments in piezoelectric materials are providing new ways of building the materials themselves, and integrating them into silicon systems provides even more opportunities to supply power where it is needed. As the power consumption of processors and wireless transceivers falls with the latest silicon technology, so the energy produced by vibrational energy harvesters can be used more effectively. Coupled with re-chargeable batteries and low-power DC-DC converters, the new piezoelectric materials can provide the power needed for portable and industrial applications with higher power outputs and increasing efficiency. The vibrational technology is also opening up new applications in transportation, particularly with road systems to provide the power for signs and traffic lights, reducing the cost of installing and managing telematic networks with dramatically long, maintenance-free design lives.